Operation BEYOND THE HORIZON ~ Spain 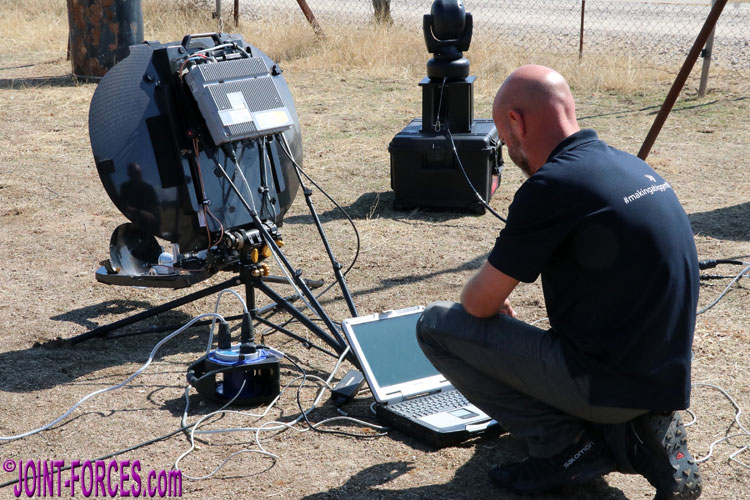 An Inmarsat techician sets up SatComs outside the Spanish FOB [©BM]

BEYOND THE HORIZON is a SatCom solutions ‘roadshow’ organised by Inmarsat to demonstrate mobile solutions for Special Forces and Security Agencies, writes Bob Morrison.

Last month, in the week between attending DSEI in London and covering Exercise RAPID TRIDENT near Lviv, we were granted the privilege of attending the Spanish leg of the tour where Inmarsat‘s regional partner Satlink and five other technology partners demonstrated different scenarios involving mobile Satellite Communications solutions to an elite group of Police, Military and Government Security Agency experts.

To showcase the latest technological developments in this specialist and critical field, with specific focus on both the individual SpecOps operative in the field and small teams deployed in remote areas where normal voice and/or data communications can be at best dodgy and at worst non-existent, Inmarsat and Satlink set up both an improvised Tactical HQ (TacHQ) and a small Forward Operating Base (FOB) in a rural location. Two mobile units, one static and the other out on patrol, were made available for the invited operatives, two lightweight manpack sets were used to demonstrate communications in the field beyond line of site, monitored unmanned perimeter security was set up around the FOB, communications links were established with large and small Unmanned Aerial Vehicles or UAVs monitoring the area, links were set up with a maritime patrol craft (even though our location north of Madrid was hundreds of kilometres from the sea) and real-time voice and data communications were initiated with an Operational Headquarters in Norway.

Almost everything we saw during Op BEYOND THE HORIZON was Unrestricted as it is the electronics and the miniaturisation inside, not the boxes themselves, that are the secret bits. Indeed the radio sets and laptop computers used were mostly commercial off-the-shelf (COTS) units as it is the plug-in boxes and the antennae, along with Inmarsat’s geostationary satellites, which are the sneaky-beaky bits; however we were asked to obscure and screens and serial numbers we caught on camera. Additionally, as most of the attendees (who, with the exception of a couple of military officers and two Unidad Militar de Emergencias personnel, were out of uniform) are involved in the SpecOps or Government Security Agencies fields we were asked to obscure faces on OpSec and PerSec grounds.

To get a feel for Op BTH, which since late summer has been touring a number of European countries or regions but which I had been previously unable to attend, I pitched up during set-up day expecting it to be as chaotic as other Defence & Security or Special Operations expos usually are in the build-up to opening day. When I arrived at the rural location to the north of Madrid, specifically chosen for its hilly terrain which would hinder line of sight communications, a small team from Inmarsat’s Spanish partners Satlink was erecting a couple of military tents to act as the TacHQ and FOB at locations a few hundred metres apart and separated by a rocky ridge, but there was no sign of the technicians from the seven companies who would be assembling and operating the comms equipment over the next couple of days. It transpired they were travelling to the demo from across Europe, carrying pretty much everything the needed (other than a back-up generator) with them in rucksacks, hard cases and laptop bags but all would be with us by late morning. For the record, the entire set-up was operational by mid-afternoon and satellite-monitored perimeter security had been set up to keep everything secure overnight.

The primary aim of Op BEYOND THE HORIZON was to demonstrate to government and military agencies the ease of operating beyond line of sight (BLOS) communications while using existing mobile radios sets, including simple UHF or VHF handsets. If a team or unit has to be rapidly deployed to a distant operational theatre – be that for any of a number of reasons ranging from disaster emergency management to humanitarian assistance provision to peace-enforcing to covert military or security surveillance – Inmarsat can provide a secure satellite communications channel for them over a determined footprint on the earth’s surface allowing them to communicate using their own encryption and their own comms equipment (voice and/or data) with just small plug-in units, such as SlingShot, and omni-directional vehicle-borne or collapsible ‘suitcase’ antennae. Not only this, but the systems allow voice and data transmission on the move at speed from ships and road vehicles, and even from helicopters flying at up to 200km/hr.

The primary systems exhibited out in the field at Op BTH in Spain were:-

Above: Both long range and short range Unmanned Aerial Vehicles with SatCom packs were used in the demo scenarios [©BM]

The five satellite communications scenarios laid on, in which the two dozen or so invited specialists were able to either participate or just watch and learn, were:~

Now I am by no means a communications expert, but over the last three decades I have seen one heck of a lot of military and NGO communications on the many training exercises and operational deployments I have covered and as a result I am well aware of the challenges faced out in the field; some of the military operations which have gone awry due to radio communications difficulties are legendary. The apparent simplicity and ease of use, not to mention the comparatively light weight and compact dimensions, of the Inmarsat kit I saw in use in quite challenging conditions out in Spain during Op BTH made me appreciate that some of those somewhat far-fetched satellite surveillance scenes from James Bond films and the like are now actually much closer to reality than possibly even the writers and producers realise. Thanks for the insights Inmarsat & friends.

BEYOND THE HORIZON, Featured, Inmarsat, Op BTH, Satlink
You may also like