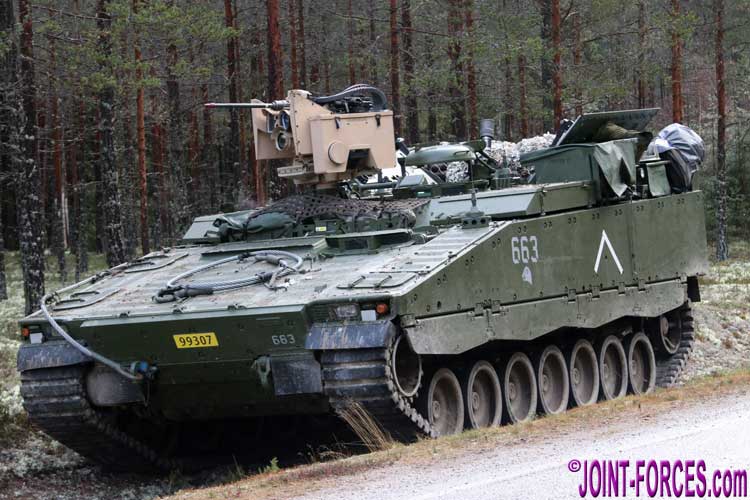 In June 2012 the Norwegian Government placed an order with BAE Systems Hägglunds and Kongsberg Defence for the upgrade of their fleet of 103 CV9030N Stormpanservogn armoured infantry fighting vehicles, first procured in 1994, and for the supply of 41 new vehicles. This total of 144 was to be broken down into 74 standard AIFVs plus five variants; 21 Reconnaissance Vehicles, 15 Command Vehicles, 16 Combat Engineer Vehicles, 16 Multi-role Carriers and two Driver Training Vehicles.

All vehicles received a new engine, upgraded running gear, rubber tracks, enhanced armour protection, a new thermal imaging system and a remote-controlled weapon system or RWS. Externally the AIFV and Command versions are visually almost identical, with the same 30mm turret and Protector RWS, but internally rear seating in the latter is reduced to three and a battle management suite is fitted. From official images released by Forsvaret (the Norwegian MoD) the Recce variant has a new and more angular turret (probably difficult to spot if the vehicle is camouflaged with scrim nets) with a Rheinmetall Vingtaqs II Observation & Fire Control Unit on a six-metre telescopic mast at the rear. Two more variants, the STING Combat Engineer Vehicle and the MultiC Multi-role Carrier, have no turret and just an RWS. Details of the final variant, the Driver Training Vehicle, are sparse.

I was fortunate to spot a small number of the CV90 MultiC (Mult-role Carrier) variant, which can serve as a mortar carrier or logistics (ammunition) resupply vehicle, in the field during TRIDENT JUNCTURE 18 and Carl spotted three of the STING engineer variants on the same day at a different location. Closer inspection of the MultiC (callsign 663) in the lead image to this article reveals it was being used as 81mm mortar platoon carrier, as a barrel can just be seen protruding from the rear hatch.

Although not fitted to the vehicles Carl photographed, the CV90 STING can be rigged with a mine plough or mine roller at the front and it has a remotely-controlled, hydraulically-operated folding arm at the rear left to allow sappers to work on suspicious objects.

The use of these upgraded turret-less CV90s instead of ageing M113 personnel carriers now means that Norwegian mortar crews and engineers can accompany their mechanised infantry colleagues with the same level of mobility and protection.