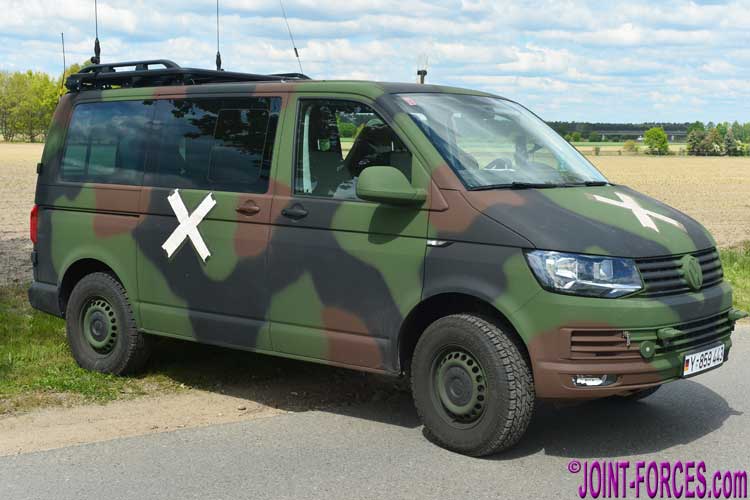 The handover ceremony was conducted at the Fallschirmjäger Kaserne barracks in Seedorf, the home base of Fallschirmjäger Regiment 31 (Airborne Regiment 31). During the ceremony the vehicles were handed over by the Abteilungsleiter Ausrüstung (Directorate-General for Equipment) of the Bundesministerium der Verteidigung (Federal Ministry of Defence) Vizeadmiral Carsten Stawitzki. For the German Army the vehicles were accepted by Oberst Thomas Geßner, the commanding officer of Fallschirmjäger Regiment 31. For the BW-Fuhrpark-Service GmbH vehicle and mobility management company, which manages the procurement of the vehicles and owns them, top manager Thomas Fischer attended the ceremony and another guest was Brigadegeneral Dirk Faust, the commanding officer of Luftlande Brigade 1 (Airborne Brigade 1).

The LKW NLK 0.5-1t hümS FüM (mit Anteil FüInfoSys) T6 WIDDER will replace Mercedes-Benz 250 GD Wolf 4×4 light trucks, which previously have been employed to field the Führungs Informations System Heer (FüInfoSys H) C3I system. These light trucks entered service from 1989 onwards and were fitted with the FüInfoSys H when this initially entered service with the German Army in 2008.

Delivery of the first new four-wheel drive vans to the German Army actually started in February 2019 and since April 2019 the vehicles have been fielded at unit level. The German airborne forces already employed some of these new vehicles during Exercise GREEN GRIFFIN 2019. It is planned that the last of the 385 new T6 WIDDER will enter service by September 2019.

The T6 WIDDER vehicles are designated handelsübliche Fahrzeuge mit militärischer Sonderausstattung or hümS, which in English means that the vans are Commercial Off The Shelf (COTS) but fitted with special mission-related military equipment. FüM in the vehicle designation stands for Führungsmittel and refers to the fact that the vehicles are prepared for the fitting of Command & Control equipment. NLK stands for Nutzlastklasse, which means payload class. Currently the Bundeswehr is procuring new COTS vehicles in the payload classes 0.5 to 1.0 tonne, 1.0 to 3.0 tonne, 3.0 to 10.0 tonne and over 10.0 tonne.

The T6 WIDDER vans of the 0.5 to 1.0 ton payload class were procured by the BW-Fuhrpark-Service GmbH vehicle and mobility management company from Volkswagen AG in order to address a requirement of the German Army. Installation of the special military equipment was done by Freytag Karosseriebau GmbH & Co.KG in Elze. This work involved the removal of the FüInfoSys H and radio installation equipment from the old Mercedes-Benz 250 GD Wolf 4×4 light trucks, its refurbishment, and mounting of it in the new vans. In addition the vehicles were also fitted with: black-out lights; a roof rack, that features mounts for two Comrod radio antennae and a BGAN (Broadband Global Area Network) satellite communication antenna; a ladder at the rear; stowage boxes and mounts for personal equipment of the crew; four storage bags for G36 assault rifles; a step on the rear bumper; an auxiliary heating system; a charger for the radio batteries and FüInfoSys H systems; and a mount for flags.

When procured the base vehicles were in a gloss light grey colour so were repainted into the Fleckentarnanstrich (FTA) three-colour camouflage pattern that consists of the colours Teerschwarz (RAL 9021 F9 tar black), Lederbraun (RAL 8027 F9 leather brown) and Bronzegrün (RAL 6031 F9 bronze green). This camouflage was adopted by the Bundeswehr in 1983.

The LKW NLK 0.5-1t hümS FüM (mit Anteil FüInfoSys) vans are fitted out for the installation of the C3I system and accompanying radios but are not issued with the equipment itself. The FüInfoSys H hardware and radios are unit owned equipment and are installed by the users.

The T6 WIDDER is a permanent four-wheel drive van that can accommodate a crew of four. It can be transported as internal load by transport aircraft such as the C-160 Transall or A400M allowing its strategic deployment. The vehicle is 4,904mm long, 1,904mm wide and 2,047mm high. It has a gross vehicle weight of 3,200kg and a payload of 850kg (including the mounting equipment for the FüInfoSys H). The van is powered by a EURO 6c exhaust emission standard compliant 2.0 litre 150hp TDI engine that is connected to a seven-speed dual-clutch automatic transmission. It features disc-brakes on all wheel stations, Electronic Stability Control (ESC) and an Anti-lock Braking System (ABS). The vehicle is fitted with an under-run protection for the engine and transmission, features a lockable rear-axle differential and can ford water obstacles up to 500mm deep without preparation.