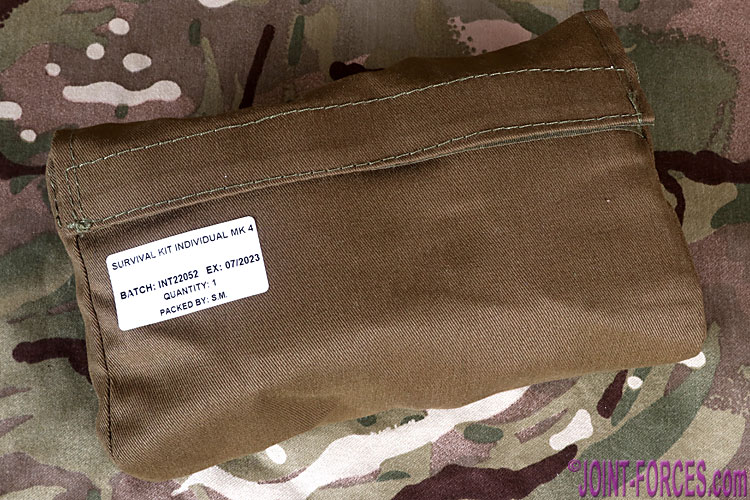 Carefully compiled to keep weight and volume to a minimum – the whole package weighs just 450g or 16oz and measures 180x120x50mm or 7×4.5x2in – the SKI Mk.4 (NSN 8465-99-1314124) is standard RAF issue and has been issued with fast jet ejector seats since before the 1991 Gulf War. Produced by BCB International of Cardiff, who also supply many NATO and other friendly nation air forces, as well as Special Forces and Special Operations Forces, with the same or very similar kits, the SKI Mk.4 consists of three vacuum-packed packages (Parts A, B & C) stowed inside a reusable cloth outer bag. After their ejector seat, the SKI is one of the most important items of kit for downed pilots [©BM]

Starting with the outer bag, which itself comes wrapped in polythene (not illustrated) to ensure it remains dry during storage, this is a very simple fabric box pouch with a lid and full-length velcro-type closure. Peel back the lid and you will find a simple two-section handle to allow the user to either carry the three contents pouches inside or, if the contents are spread through the flight suit pockets, the bag can be used for collecting kindling or foraged foodstuffs, such as fruit and eggs. There is also a metal eyelet at one end of the velcro closure to allow the survivor to tie the bag on with a cord lanyard to prevent loss.

Part A is a small (95x57x25mm) tobacco tin, vacuum-packed in a dark green foil pouch, which contains: 2x unlubricated condoms, for carrying water; 2x tampons, for use as tinder; 20x purifying tablets; flint & striker, 3x small Esbit hexamine fuel tablets; 1x cotton wool ball, also for tinder; and two needles. This is the Heating & Drinking pack and the one part of the three that preferably should always be kept on the body, in a trouser pocket for example; safety is the only reason for the needles being in this pack.

Clockwise, Parts B, C and A out of their packets along with Contents List [©BM]

Part B is the largest of the three and also comes vacuum-packed in a dark green foil pouch with an easy-tear notch in the top. Inside the outer pouch (if opened very carefully it can double as a rudimentary lightweight water scoop or cup) one will find: 1x rolled sleeping bag, in reality just a very large, man-size polythene bag to climb into to keep dry; nylon cord measuring roughly 6m or 20′; 4x suspender clips, to turn the sleeping bag and nylon cord into a basha instead; 1x mini-compass with lanyard; 1x fishing kit, including hooks, line, sinkers, swivel and flies; 1x snare wire; 1x wire saw, with handles; 1x stiff-backed razor blade; and 1x nightlight candle. This part also contains a Contents List which has some survival instruction notes. The smaller items are rolled up inside the large polythene sleeping bag, which is constrained by a heavy duty rubber band; like the vinyl tape around the survival tin, this band has potential alternative uses so don’t throw away.

Part C is just a single item, a foil survival blanket rolled up and constrained by another rubber band, vacuum packed in a clear plastic outer bag. This ‘space blanket’, which is silver on one side and dark olive green on the other, will retain body heat even though it is incredibly light and thin. Staying warm and dry keeps spirits up and increases chances of survival in the wilds, so this little silver roll could actually be worth a lot more than its weight in gold. Additionally, if pegged out foil side up, its reflection could well be seen from miles away by aerial searchers.

Although I have carried a Survival Tin for over two decades, fortunately I have not yet been in a situation where my life depended on it, though there have been many occasions when I have opened it up to use one or more of its contents. The Survival Kit Individual simply provides the user with more options than a basic tin, but should the user find themselves unexpectedly in the wilderness, or behind enemy lines without immediate hope of rescue, these additional items could be lifesavers.

For more on the BCB International range of Survival tins, kits and products click on this BCBIN.com link.