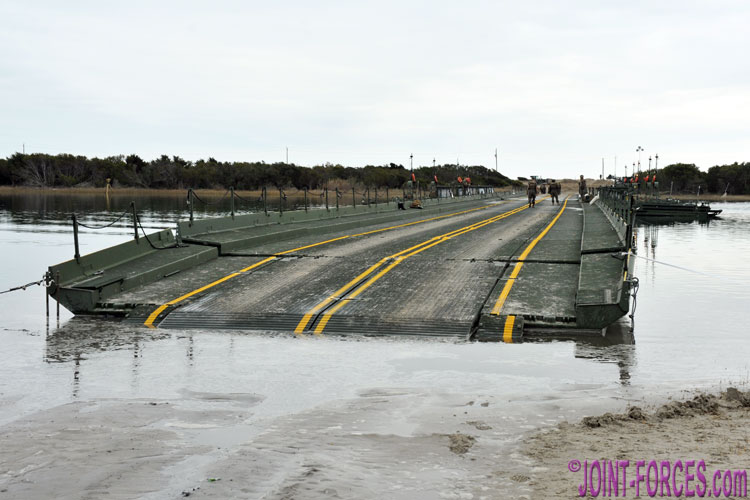 The Ramp Bay and Interior Bay of the Improved Ribbon Bridge (IRB), or Faltschwimmbrücke Typ 2 (FSB2) in German service, are floating integral superstructures made of aluminium that function as pontoons and feature a roadway surface.

The Interior Bay is a four-pontoon folding module consisting of two inner and two outer pontoons; each inner pontoon being divided into two watertight compartments. The Interior Bay unfolds automatically once released and afloat. The bays are connected to each other by first manually engaging four upper couplings, followed by two lockpins on the inner pontoons. The lockpins act as bearing points between consecutively joined bays, thus allowing the entire bridge to hinge with the weight of a moving vehicle and/or uneven water conditions.

Ferries and bridges are usually built with the SRB, IRB and FSB 2 in the same way and in the following this procedure is only briefly described. After a possible bridging or ferry site has been identified, first the Bridge Erection Boats (BEB) are launched in the same way as later on the bridge bays.

First the boat crew and a bridge erection team climbs aboard, then the bridge transporter carrying the boat reverses down the riverbank into the water. The boat is then launched, either by gravity or with support of the truck mounted hydraulic boom in the case that the gradient of the river bank is not steep enough. Once at the critical angle, the boat slides down over rollers into the water. With enough BEBs for the planned bridge or ferry deployed the bridge bays are then launched.

When launched the bridge bays are still folded, on hitting the water its pressure and the hinging arrangement of the bridge bay automatically ensure their opening. Once afloat, a BEB will now take care of the launched bridge bay and engineers climb onto the bay and lock the two centre pontoons and two side pontoons in place.

In the next step individual bridge bays are manoeuvred next to each other with the BEBs and are then coupled together, for example to form a four bay ferry consisting of two interior bays and two ramp bays, or a bridge section consisting of a ramp bay and several interior bays. Connecting of one bay to another takes about one minute. If bays of the Improved Ribbon Bridge (IRB) are used in conjunction with bays of the older Improved Float Bridge (IFB) connecting them will take about two minutes.

Once afloat BEBs take care of the launched bridge bays, engineers get on board and lock the pontoons in place [© Carl Schulze]

In the case of a bridge, rather than a ferry, several bridge sections are navigated into place by the BEBs and then coupled together to complete the bridge. Finally the bridge is anchored to the shore with cables and the ramps of the ramp bays are adjusted to the shore gradient. Attached to the interior bays, the BEBs are now used to keep the bridge in place, basically compensating for the current. During a ferry service the BEBs are used to power the ferries and to navigate them to the assigned landing points. According to GDELS skilled personnel can erect a 100m long IRB or FSB 2 bridge in approximately 30 minutes under favorable conditions.

*Figures from a GDELS product brochure