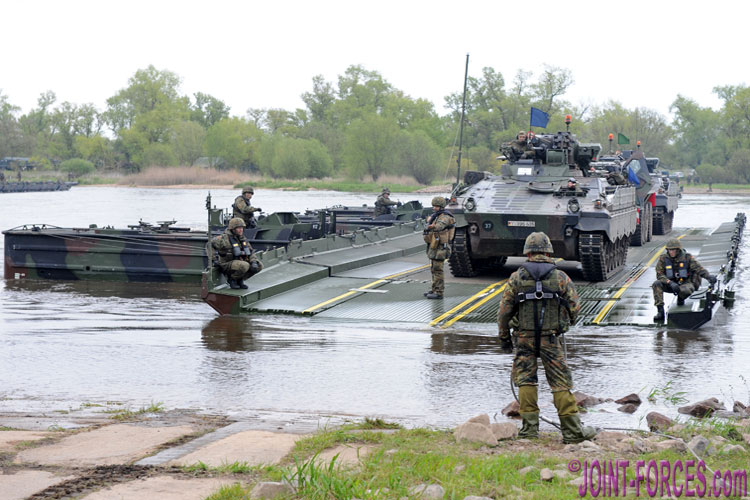 The SRB, FSB 2 and IRB can all trace back their history to the late 1960s and are Western designs based on the Pomtommo Mostovoj Park (PMP) pontoon bridge developed in the Soviet Union in the post-WWII years. Development of the American SRB was conducted by the Pacific Car and Foundry Company in cooperation with the US Army Mobility Equipment Research and Development Center (MERDC). The SRB was type classified in 1972 and first entered service with the US Army in 1976. Later it was also adopted by the United States Marine Corps.

Series production of the SRB for the US forces was a combined effort of several manufacturers, the first being the Consolidated Diesel Electric Division of the CONDEC Corporation. In the US Army the SRB replaced the Mobile Assault Bridge (MAB). Initially the interior bays and ramp bays as well as the BEBs were transported with the M812 Ribbon Bridge Transporter, a vehicle from the M809 5-ton 6×6 Truck Series. This later was replaced by the M945 Ribbon Bridge Transporter, which belongs to the M939 5-ton 6×6 Truck Series. For South Korea the SRB was license-built by Doosan Heavy Industries & Construction Co. Ltd. In early January 1996 US engineers used the SRB system to bridge the Sava River in order to allow the US IFOR contingent to enter into Bosnia and Herzegovina from the north.

In 1977 the German Bundeswehr also decided to adopt the SRB. The Germans, however, requested some modifications, such as the use of metric measurements in all areas, improvement of the hydraulics of the ramp bays, anti-slip coating on the roadways of the ramp and interior bays and simplified handling of both bay types. Design and production of the system for Germany was conducted by EWK Eisenwerke Kaiserslautern GmbH (since 2002 known as General Dynamics European Land Systems Germany GmbH – GDELS) and the bridge system entered service under the designation Faltschwimmbrücke (FSB – Foldable Floating Bridge) in 1979.

Within the Bundeswehr the interior bays and ramp bays, as well as the BEBs, were transported on the MAN 7-tonne 6×6 KAT 1 Brückentransporter or Bridge Transporter. Despite the modifications, the German FSB is fully compatible with the American SRB. Including Germany, the FSB entered service with the armed forces of a total of eleven countries, among them Canada, the Netherlands, Portugal and Sweden. For Singapore it was built under license by Singapore Technologies Shipbuilding and Engineering Limited. In total some 1,700 ramp and interior bays of the FSB family were produced, theoretically amounting to a length of more than eleven kilometres if all were connected to each other.

M17 Interior Bay of the Improved Ribbon Bridge (IRB) in service with the US Army after launched – the interior bay has a total weight of 6,350kg [© Carl Schulze]

SRB and FSB bridges could be used by vehicles up to MLC 60 and by vehicles up to MLC 80 when crossing under caution is exercised. In ferry service, vehicles up to MLC 70 can be transported, but the steadily increasing combat weight of modern fighting and protected logistic vehicles resulted in the requirement for a ribbon bridge system with a higher MLC (Military Load Classification) allowance. Therefore in the late 1990s EWK Eisenwerke Kaiserslautern GmbH began to develop the Improved Ribbon Bridge or IRB, which is based on the FSB.

The IRB is fully interoperable with the SRB and FSB, it can be transported with the same vehicles and when crossing with caution is exercised the IRB can be used by tracked vehicles up to MLC 80 and wheeled vehicles up to MLC 96. It can be employed in rivers with a water velocity of 3.15m/s, features a total usable road width of 6.75m for two lane traffic (versus 6.6m on FSB) and adjacent to the roadway there is a walkway on the outer pontoons. Its ramps can be hydraulically raised to a height of 2.35m (versus 1.0m on FSB), it has an improved unfolding mechanism and it is fitted with a non-skid surface and splash plates to prevent water from flooding the roadway.

In 2000 the US Army became the first customer to order the system and in 2008 the USMC followed suit. In 2009 Germany also procured the IRB, designating it Faltschwimmbrücke Typ 2 (FSB 2). While the Germans retained the MAN 7-tonne 6×6 KAT 1 Brückentransporter as transporter for the components of the bridge system, the US Army employs the M1977 HEMTT Common Bridge Transporter or CBT (also fielded in A2, A2R1 and A4 standard) fitted with the M15 Bridge Adapter Pallet (BAP) or the M14 Improved Boat Cradle (IBC) for this purpose. In the case of the United States Marine Corps, the Logistic Vehicle System Replacement (LVSR) MKR18 Cargo Truck is employed for the task.

The US Army and the USMC used the IRB several times during Operation IRAQI FREEDOM in Iraq, for example to establish a 523metre long bridge over the Tigris River in the vicinity of Tikrit. In 2015 Australia and Sweden placed orders with GDELS for the IRB system.