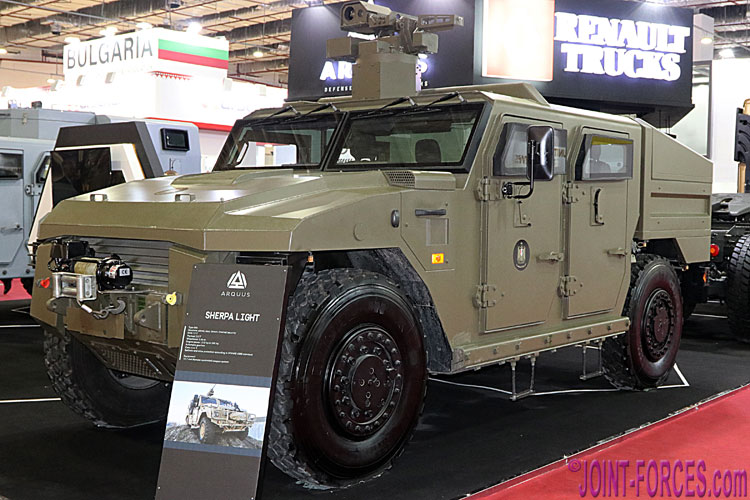 The ARQUUS SHERPA Light, formerly the Renault Trucks Defense SHERPA 2 or SHERPA 3, is a family of 4×4 tactical vehicles which share the same chassis, writes Bob Morrison.

First publicly unveiled at the EUROSATORY 2006 defence expo in Paris, the original Renault SHERPA 2 was marketed as a French alternative to the AM General HMMWV or Hum-vee, and indeed the first examples bore more than a passing resemblance to the American vehicle, but its ladder chassis and beam axle configuration gave it more ground clearance and a higher sit. In 2010 the vehicle family was renamed SHERPA Light and in May 2018, just before EUROSATORY 18, Renault Trucks Defense (owner of the Panhard, Auverland and ACMAT brand names) was rebranded as ARQUUS – a combination of the Latin words for armour and horse.

Although not procured in massive quantities by the French Army, SHERPA Light is used in counter-terrorist roles by both French Special Forces and France’s GIGN (Groupe d’Intervention de la Gendarmerie Nationale or National Gendarmerie Intervention Group) as well as by police and military units of at least eight other nations; in addition to those eight foreign countries known to have bought SHERPA 2 / Light, the company also mentions unspecified NATO countries in its latest media pack issued to specialist defence media in December 2018. Client confidentiality contractual obligations prevent ARQUUS talking too much about which specific versions of the SHERPA 2 have been sold to particular countries, but at EDEX 18 in Cairo their Egyptian customers allowed them to display on their exhibition stand two variants which had seen operational service and naturally we seized the opportunity to photograph these for our readers.

Six different variants, some armoured and some unarmoured, are currently offered:-

Although the SHERPA Light, especially in its sloping back Scout version, bears a passing resemblance to the HMMWV or Hum-vee it is actually a much taller and heavier vehicle. The armoured Egyptian version with Remote Weapon Station at the top of this page has a declared GVW (Gross Vehicle Weight) of 11,000kg, compared to under 4 tonnes for the base Hum-vee, and its payload is given as 3,300kg. The wheelbase of the Egyptian vehicle is relatively comparable, at 3,540mm versus 3,300mm for the US vehicle, and both are almost identical in width at 2,200mm and 2,160mm respectively but the Hum-vee has a much lower profile at just 1,370mm compare to 2,100mm for the SHERPA. In armoured configuration the SHERPA Light is quoted as offering both ballistic and mine protection to STANAG 4569.

In addition to the five core models listed above various other prototypes, including a battlefield ambulance and a compact three-man airportable SpecOps version, have been developed and it would appear from company promotional videos that further concept vehicles on the SHERPA Light chassis are in the pipeline. The original SHERPA 2 demonstator on its debut at EUROSATORY in 2006 – this is when it, understandably, picked up its French Hum-vee nickname [©BM] The protruding windscreen and side vision blocks identify this SHERPA Light Scout as being armoured – ring mount can take up to 12.7mm heavy machine gun [©BM]