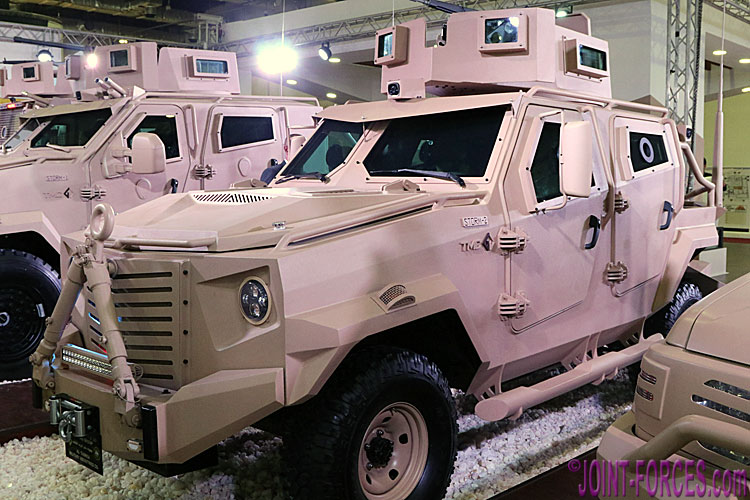 I first encountered the TMC range in Abu Dhabi when visiting IDEX 17, the biennial International Defence Exhibition in the United Arab Emirates, and caught up with the manufacturer again at the recent EDEX 18 (Egyptian Defence Exhibition) in Cairo. Until comparatively recently the Western powers have mostly been the main driving force behind armoured vehicle design and manufacturer but these days the Arab World is catching up fast, driven by the various conflicts and unrest in the Middle East and the need for governments to both protect their troops and security forces from attack and also provide their nation’s workforce with skilled manufacturing jobs.

Part of the Al Araba Group, Riyadh-based Al Tadrea was formed in 2003 and over the last fifteen years it has produced a wide variety of armoured vehicles ranging from discreetly protected high end saloons through light utility vehicle conversions to personnel carriers and even protected armed earthmovers. Unfortunately their range of current vehicles was shoehorned onto their stand at EDEX 18, with lighting effects and gantries coupled with the lack of space making photography difficult, but at least I was able to capture a few shots for the record and I was also able to glean a few basic specification details.

On the APC side, examples of both the STORM 1 and STORM 2 were on the stand in Cairo alongside one of their Border Guard 2-door model armoured pick-up trucks and the new FOX Tactical Vehicle for Special Operations. As maximum use was being made of stand space the 2-door pick-up was almost impossible to photograph, but fortunately I have a library shot of this model from IDET 17 and at that expo.

Starting with STORM 1, this is an 8,200kg gross vehicle weight five-man protected patrol vehicle with four side doors and an optional fifth door into the rear load bed area plus a manually rotated roof cupola capable of taking a machine gun up to 7.62mm calibre or a 40mm automatic grenade launcher. Powered by a 6.7litre V8 turbo-diesel engine STORM 1 has a design top road speed of 110km/hr and claimed off-road speed of 70km/hr. Quoted dimensions are 5955 x 2337 x 2948mm high (over cupola) with 3578mm wheelbase and 360mm ground clearance. Protection level is given as STANAG III with B7 protection level (69mm) bullet resistant glazing.

STORM 2 is a similar but smaller and lighter four-man vehicle, tipping the scales at 5,000kg, which has four side doors plus an emergency exit door at the rear of the blast-protected main compartment and the example seen at EDEX18 also had a machine gun cupola similar to STORM 1. Powered by a 6-cylinder 5.7 litre engine, STORM 2 has the same design road speed and off-road speed as its larger sibling. Dimensions given are 5440 x 2205 x 3056mm high with 3250mm wheelbase and 360mm ground clearance. Blast protection varies from STANAG I through to STANAG III with B7 ballistic protection.

FOX is a tactical lightweight long range patrol vehicle intended primarily for Special Operations Forces and is visually quite similar to the Al Thalab produced in Jordan. GVW is given as 4,100kg and kerb weight is 3,200kg giving an effective payload of 900kg. Powered by a 4.2 litre engine and carrying 180 litres of fuel, the FOX is said to have an operational range of 1,000km. Up to five crew can be transported and main armament is a 12.7mm heavy machine gun on a ring mount with a 7.62mm machine gun on a pintle mount for the commander. Dimensions given are 5,700 x 2,400 x 2,415mm but neither wheelbase nor ground clearance are quoted. Protection is limited to a blast protected floor, quoted as to NATO DM-51, though the fuel tank is also protected and the fold-down windscreen panels appear to be ballistic glass. Run-flats are fitted all round and the seats are blast attenuated.