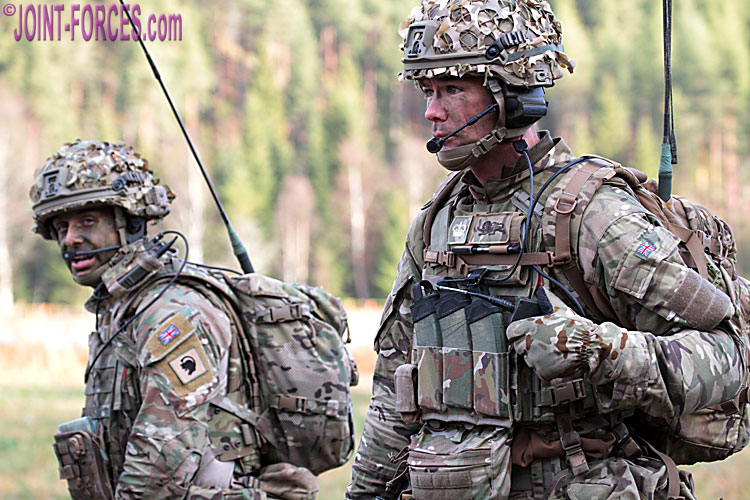 Early on D+3 NATO’s 4 [UK] Multi-National Brigade dug in near the bridge over the Tysla at Elvål, just north of Bergset, to try to stop North (Red) Force in its tracks, writes Bob Morrison.

This British-led multinational formation, 4 [UK] MNB, was one of three South (Blue) Force army brigades tasked with blocking the southward advance of three similar North (Red) Force brigades on the LIVEX phase of the massive NATO Exercise TRIDENT JUNCTURE 18 (TRJE18) held in Norway at the start of November. Over the next few weeks JOINT-FORCES.com will endeavour to cover as much of the TRJE18 ‘big picture’ as possible in a number of features, hopefully without causing too much disruption to the rest of our regular content.

However, in direct response to requests from members of Anzio Company of 1st Battalion the Duke of Lancaster’s Regiment – who defended the west side of the river crossing at Elvål on D+3 and effectively blocked the southward advance of the central North (Red) Force before pushing them back to their start point over the following three days – we are uploading the accompanying images of their battle out of sequence. British troops were operating under PED RED (i.e. no Personal Electronic Devices were allowed during the LIVEX) so theoretically none of the lads had mobile phones or digital cameras with them to take photos for their social media accounts.

The bulk of the accompanying images, posted in chronological order, are of a single platoon from 1 LANCS, but on OpSec grounds we are not saying which one or naming any of the guys; however you can guarantee that their grandma or mum will recognise them… even if only a single ear is showing in the photos. If you are in one of these pictures feel free to republish them on your personal social media sites and if you spot your mates on this page please point them in this direction.

Our thanks go out to the OC and CSM of Anzio Company for tolerating us during the defence of ‘The Bridge At Elvål’, which for the purpose of TRJE18 was notionally destroyed to prevent enemy armour crossing. The 1 LANCS and 1 R IRISH companies, plus Norwegian Home Guard, defending the crossing point were supported by Danish Leopard main battle tanks and we have included a shot of them at the bottom of the page as they proved crucial support by halting the advancing Red Force tanks.