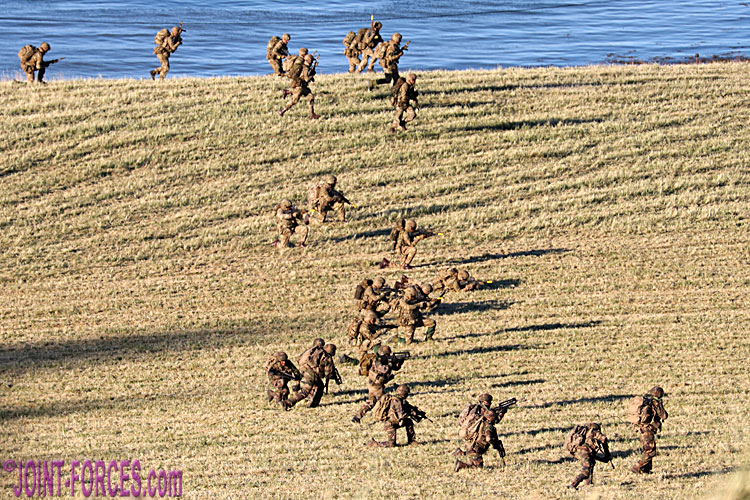 To understand the TRIDENT JUNCTURE (TRJE) big picture we first need to look back to the Cold War era, where the Soviet Union and the Warsaw Pact were perceived as a constant threat to both western European democracy and the NATO (North Atlantic Treaty Organisation) Alliance nations. For the three decades before the fall of the Berlin Wall and the Inner German Border, the so-called Iron Curtain, on the cusp of the 1990s, and the subsequent dissolution of the Warsaw Pact and the breakup of the Soviet Union in 1991 NATO maintained a token multinational Quick Reaction Force which regularly exercised together.

Known as Allied Command Europe (ACE) Mobile Force or AMF, this brigade-sized formation had a permanent headquarters in the then West Germany and 14 of the NATO nations permanently allocated troops and resources to ensure a multinational Quick Reaction Force consisting primarily of infantry and artillery, with aviation and naval support, could speedily be dispatched to any Alliance nation under threat from an external aggressor. The Force’s semi-official motto was ‘Count The Flags, Not The Barrels‘ as any attack on one member’s sovereign territory would be deemed to be an attack on all.

Every Cold War exercise of the Land Forces component – AMF(L) – was considered to be an operational deployment rather than just a training manoeuvre as their mission was seen as being every bit a part of NATO’s deterrence measures as the nuclear defence shield, and although AMF(L) never actually went into battle during the Cold War its very presence was seen as it effectively doing its job. However, in 1999 AMF(L) formed the core of the NATO force deployed to Albania to provide Humanitarian Assistance to refugees fleeing from the civil was in Kosovo.

Danish, British and Estonian troops on pre-Afghanistan training in the UK, 2006 [©BM]

At the start of the new millennium, with the last embers of the fires in the Former Yugoslavia dying out and few conventional external threats to the Alliance appearing to exist, the need for a NATO Quick Reaction Force such as AMF(L) was being questioned. When in 2002 the British Government, under Tony Blair, announced it was withdrawing its contributions to focus instead on the Global War On Terror and then no other Alliance nation offered to plug the resultant gap, it was announced that AMF would be disbanded that autumn.

For the next few years military attention was focussed first on Iraq and then on Afghanistan, with scant attention being placed on the conventional defence of Europe as many former Warsaw Pact opponents had now aligned with the European Union and NATO. Then, in 2008, the Russian Bear reminded the West that it still had claws by invading Georgia and shortly after this the armies of many NATO nations, which had been focussing on combating Irregular Forces, began to reconsider training to defend against a more conventional threat.

When in 2014 Russia first unexpectedly annexed the Crimean Peninsula, until then part of Ukraine, and then militarily supported violent separatists in Eastern Ukraine, the leaders of the NATO nations woke up to the potential threat and at the 2014 Wales Summit they agreed to form a Very High Readiness Joint Task Force (abbreviated to VJTF). The TRIDENT JUNCTURE series of triennial exercises, the first of which was held in 2015 primarily across Spain and Portugal, was conceived as a means of both exercising the multinational headquarters in a Computer-Assisted Exercise / Command Post Exercise (CAX/CPX) and validating logistics and planning plus combat TTP (Tactics, Techniques & Procedures) through running a complex Live Exercise (LIVEX) with several deployed combined forces (i.e. multinational) brigades actually on the ground.

Spanish and Slovenian infantrymen in Norway during TRIDENT JUNCTURE 2018 [© BM]

The LIVEX phase of Exercise TRIDENT JUNCTURE 2018 (TRJE18) was run under the newly developed OCCASUS training scenario which saw three land forces brigades playing the part of North (Red) Force aggressors against three South (Blue) Force multinational brigades, including the VJTF, across a 60,000 square kilometre exercise box in eastern mid-Norway from 31st October to 3rd November. On 4th November South Force counter-attacked, giving North Force (which included non-NATO troops from Sweden) the opportunity to fight a defensive Article 5 action for several days. To add an extra dimension, a North Force amphibious task group was inserted at the start of the LIVEX and a similar South Force formation (which included non-NATO troops from Finland) was landed a few days later to combat them.