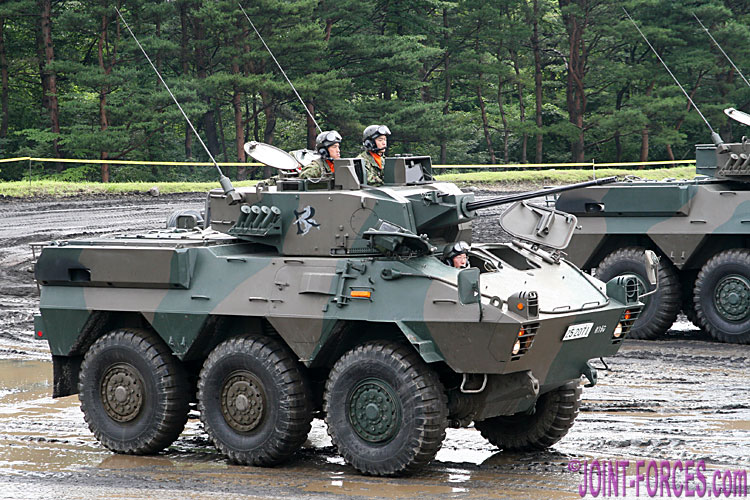 In second part of his feature on the vehicles of the Japan Ground Self-Defence Force or JGSDF, Gordon Arthur focuses on the wheeled fleet.

The evaporation of the Cold War threat in 1989 did not herald an era of security for Japan. Instead, new regional challenges emerged that cause much consternation in the ‘land of the rising sun’. There is great concern over North Korea, a country that has admitted to kidnapping Japanese citizens from their own shores and secreting them away to the Hermit Kingdom. North Korea has pursued a ballistic missile and nuclear weapons programme too, with ballistic missiles routinely splashing down in the Pacific Ocean.

Up until 1998, Mitsubishi manufactured the Type 73 Small Truck based on the original Willys M38 – this particular variant mounts a Type 60 106mm recoilless rifle [© GA]

As well as the bellicose actions of North Korea, Japan also wrestles with territorial island disputes with China and South Korea. Japan, along with the USA and many other regional powers, are anxious about the massive bulking up of China’s People’s Liberation Army (PLA). These emerging regional threats have led to a Japanese requirement for lighter and more mobile forces. This change in mission is reflected in new vehicles that are entering the JGSDF inventory.

This Type 73 Small Truck, introduced in 1996 to replace the older jeep, is a militarised version of the well-known Mitsubishi Pajero – it is powered by a 124hp turbo-diesel engine [© GA]

The JGSDF is the largest of the three branches in the JSDF, with approximately 150,800 people in uniform, as well as 54,100 Reserves. The defence of Japan is the responsibility of five regional armies (Northern, Northeastern, Eastern, Central and Western) that are supervised by a Ground Central Command. The JGSDF is currently organised with one armoured and eight infantry divisions, as well as one airborne brigade, six infantry brigades, one amphibious brigade, three artillery brigades, two air defence brigades, one helicopter brigade, and four engineering brigades.

A Toyota High Mobility Vehicle (HMV) exits a CH-47J Chinook helicopter – introduced in 1993, the HMV is similar in appearance to the HMMWV and is powered by a 150hp 4.1-litre turbo-diesel engine [© GA]

Japan possesses a fascinating array of armoured vehicles, the majority of which have been designed and produced domestically in an effort to advance the country’s defence industry. Licensed production of foreign equipment is common, but Japan produces its own designs wherever possible. Indeed, the only foreign-designed vehicles the JGSDF has that are in common with its allies are artillery pieces – the M270 MLRS, M110A2 self-propelled howitzer (SPH) and FH-70 towed howitzer.

One weapon system based on the Toyota HMV is the Middle-Range Multipurpose Missile (Chu-MPM), which is an antitank missile system – introduced in 2009, the missiles employ semi-active laser homing or infrared imaging [© GA]

However, this indigenous approach caused by constitutional constraints produces difficulties for Japan in its weapons programmes. Because exports of military hardware were historically forbidden by Japan’s own Constitution, the result is small production runs and vehicles manufactured at a slow rate. With no export customers, the Japanese defence industry is condemned to a vicious cycle of low production rates and high costs. Even licensed production increases prices in the order of 20-30%. Mitsubishi Heavy Industries generally produces tracked armoured vehicles (MBTs, APCs, IFVs), while Komatsu specialises in wheeled armoured vehicles. These two companies hold a virtual monopoly that is difficult for competing companies to break into.

As the accompanying photos reveal, Japan has an extremely well-equipped and capable army…or rather self-defence force! Known as a Type 73 Medium Truck, this example from the 9th Signals Battalion was seen in northern Japan – the vehicle built by Toyota offers a 2-ton payload [© GA] The Type 73 Large Truck of 6×6 configuration, which is widely used throughput the JGSDF, is built by Isuzu – this is the facelift model that was introduced in 1999 [© GA] This is the Type 12 anti-ship missile system which has a reported range of 200km, plus far greater precision and the ability to perform midcourse corrections – the 8×8 truck chassis is built by Mitsubishi [© GA] Built by Komatsu, the LAV entered service in 2001 – it is commonly fitted with a 5.56mm Minimi machine gun, although the commander is seen here aiming a 5.56mm Type 89 rifle [© GA] An FH-70, the JGSDF’s primary towed howitzer, fires a round – licensed production of the 155mm howitzer by Japan Steel Works commenced in 1983, and the 479th and final weapon system was completed in 2001 [© GA] Finally, a reconnaissance soldier rides his Honda XLR250R, a militarised version of a commercial motorbike – it is modified with protective bars and a radio rack on the rear [© GA]

Armour, Featured, Japan, JGSDF, softskin, wheeled
You may also like