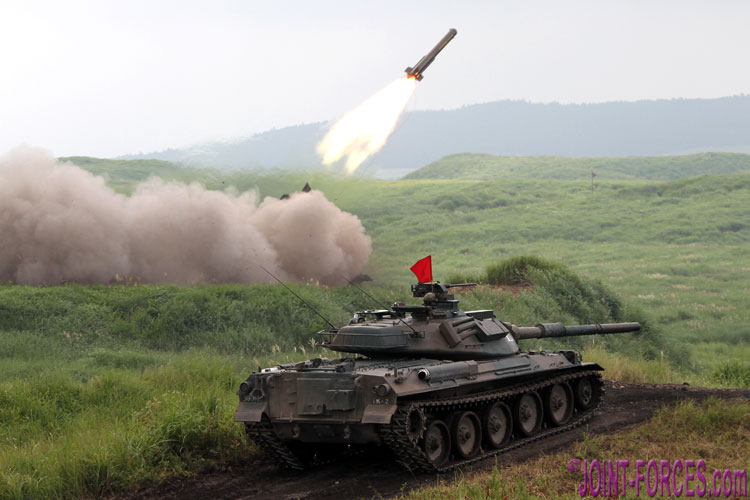 In this two-part feature Gordon Arthur focuses on the wheeled and tracked vehicles used by the Japan Ground Self-Defense Force or JGSDF.

Under the cover of darkness, the company of Type 74 tanks from the 2nd Division of the Japan Ground Self-Defense Force quietly moved into position on the bluff overlooking the sandy beach on the island of Hokkaido. Their unique hydro-pneumatic suspension systems allowed them to nestle down amongst the long beach grass until they were almost completely hidden from view, their green and brown camouflage paint providing perfect concealment. The 105mm gun barrels of these tanks were pointing directly towards the ocean as the crews settled down to await the arrival of the Soviet armada expected to coincide with the breaking of dawn. These Japanese tanks, with their well-rounded turrets, were helping form one of Japan’s first lines of defence against the communist juggernaut crossing the Sea of Japan from Vladivostok and Russia’s Far East.

The Type 78 Snowcat is operated only in units stationed in northern Japan where snowfalls are heavy – it is not armoured and is used for transportation of up to twelve troops or 1,000kg of cargo [© GA]

This may seem like an unlikely scenario nowadays, but for Japan this was the dire threat it faced throughout the decades of the Cold War. Japan had feared a Soviet invasion since the time of the Korean War, one that would be likely to have first targeted the northern Japanese island of Hokkaido. That Communist threat has obviously now dissipated, but it was under this threatening cloud that the JGSDF’s main battle tank (MBT) and infantry fighting vehicle (IFV) designs came to fruition. This two-part article examines the unique and interesting vehicles serving at the forefront of Japan’s modern JGSDF.

When Japan entered WWII on 7 December 1941, the Imperial Japanese Army (IJA) consisted of 51 divisions and 1.7 million men. By the end of the war in 1945, the IJA had grown to 5.5 million soldiers in 145 divisions. Japan’s final defeat brought about the disbandment of its armed forces to prevent any repeat of its militaristic ambitions. However, the USA was soon encouraging Japan to re-establish a military, with the catalyst being the outbreak of the Korean War on 25 June 1950. After the Korean War descended into an unsteady armistice on 27 July 1953, fears remained that the USSR would continue flexing its military muscles in the region and invade Japan.

In 1954 the Police Reserve Force evolved into the Japan Self-Defense Force (JSDF) consisting of its three Ground, Air and Maritime components. Article 9 of the 1947 Constitution of Japan states, “Japanese people renounce war as a sovereign right of the nation”, and “land, sea, and air forces, as well as other war potential, will never be maintained”. The nomenclature ‘Self-Defense Force’ was thus a deliberate attempt to sidestep the fact that Japan had once again formed a viable Army, Navy and Air Force. The Type 87 Antiaircraft Automatic Weapon entered JGSDF service in 1987, and a total of 52 units were produced up until 2002 – the 44-tonne vehicle features a pair of 35mm Oerlikon KDA cannons [© GA] The 89FV is built by Mitsubishi Heavy Industries – a crew of three operates the IFV, and seven passengers are carried in the rear compartment [© GA] Gradual retirement of the Type 74 tank began in 1999, though a significant number are still in service – a rifled 105mm gun is the tank’s main armament [© GA] A pair of Type 90MBTs manoeuvres at Camp Fuji, with the one on the right fitted with a dozer blade – this platform is propelled by a 1,500hp supercharged and turbocharged Mitsubishi 10-cylinder diesel engine [© GA] Armour, armour file, Featured, Japan, JGSDF
You may also like