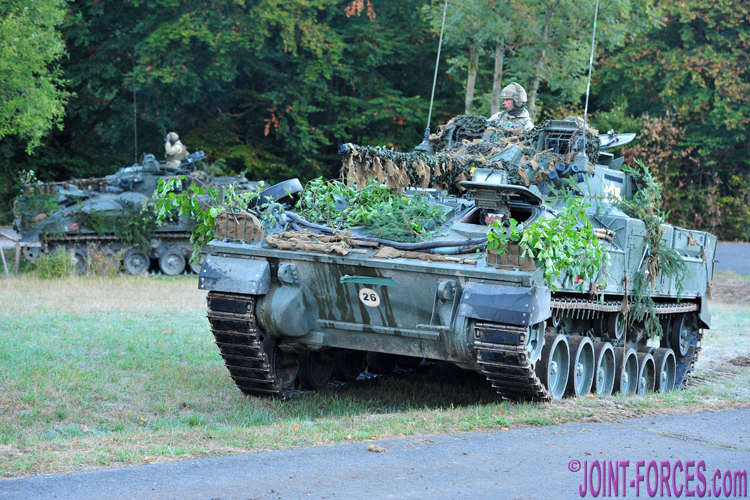 On 5th October 2018 the German Federal Minister of Defence Ursula von der Leyen and the British Secretary of State for Defence Gavin Williamson officially signed the Joint Vision Statement aimed to further deepen the cooperation between the armed forces of both countries. A little earlier, in late September, elements of the German Jäger Bataillon 1 and the British 1st Battalion of the The Princess of Wales’s Royal Regiment, nicknamed The Tigers, conducted interoperability training in the spirit of this Joint Vision Statement at the Schwarzenborn Training Area in Hesse in Germany.

Schwarzenborn Training Area, 25th September 2018, 06:00. Despite the fact that it will be sunrise in less than 30 minutes it is still pitch black. To the naked eye, the German Waffenträger 1 Wiesel TOW armament carrier that has taken up a position next to a bush to cover one of the approach roads to the delaying positions of 4. Kompanie from Jäger Bataillon 1 is nearly invisible.

The AN/TAS-4A thermal sight of the vehicle’s TOW anti-tank guided missile system allows the commander of the vehicle to clearly monitor the terrain ahead. A little while ago he detected the distant rumble of tracks running on hard surface and the sound of screaming engines. This sound has gotten louder and louder by the minute, a clear sign for the German Jäger light infantry soldier that the attack by A Company Group of the 1st Battalion, The Princess of Wales’s Royal Regiment (1 PWRR) will strike home shortly.

Suddenly, the noise of small arms fire can be heard from a wood to the south of the German position, which is grouped around some houses at a crossroads. Advancing dismounted British troops have run into a German sentry position. Seconds later loud bangs indicate that well directed mortar fire is now hitting the German positions. This mortar fire going in is the signal for the British armoured infantry to attack.

At high speed the FV510 Warrior Infantry Section vehicles break cover and close in with the German positions, engaging them with their 30mm L21 Rarden cannons and 7.62mm L94A1 Chain Guns. A shot from a flare pistol simulates the launch of a TOW missile by the Waffenträger 1 Wiesel TOW armament carrier. Seconds later the nimble anti-tank vehicle is changing positions. For a couple of minutes the battle rages back and forth then the German troops withdraw, having completed their task of slowing down the British advance.

At the same time the first Warrior Infantry Section Vehicles have reached the houses near the crossroads and come to an abrupt halt. Now British infantrymen can be seen dismounting from their vehicles, rushing to the nearby buildings and clearing them of any remaining opposition. By taking and securing the crossroads these British troops also have gained their objective.