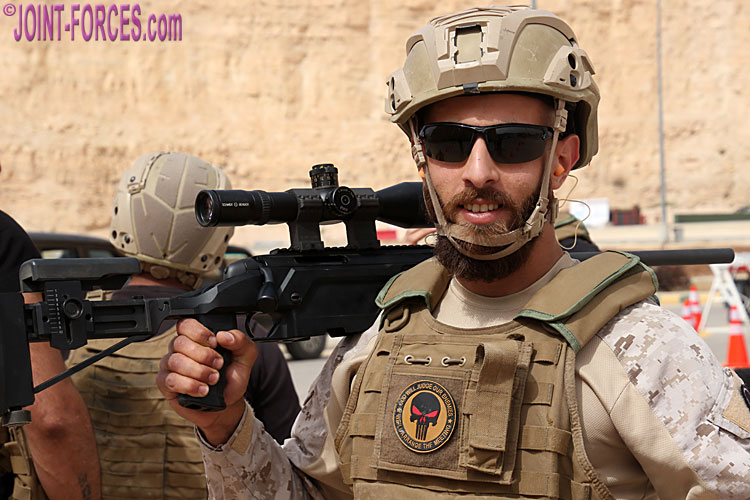 McQUADE, which ran in tandem with the drive & shoot event called The Great Escape, was a precision shooting event with a twist. During most of the other events at the 2018 competition, held at the King Abdullah II Special Operations Centre or KASOTC, one of the five participants was a dedicated sniper and the other four were assaulters armed with carbines, but during McQUADE all five had to take turns in downing targets with their team’s sole sniper rifle.

As most readers be well aware, the Special Operations Sniper role is highly specialised. Not only does the sniper train long and hard for his, and occasionally her, specialism in much the same was as a Special Operations Medic or Demolitions Expert, but also they are chosen because they have a natural ability to not only shoot with great precision but also to calculate for the myriad of natural and environmental variables which affect a bullet in flight. There was therefore a fair bit of trepidation amongst the non-snipers when they received the team briefing the night before the McQUADE event commenced.

At the briefing the Team Captains were given plans of the five-storey Close Quarter Battle building, the ‘Killing House’, which has balconies, terraces and flat roofs plus many windows overlooking five different shooting ranges out to 400 metres. They then had to plot the fastest way to get into and through the building to five different shooting positions on four floor levels to allow each designated bank of targets to be engaged in the fastest time; not only was accuracy critical but teams were also up against the clock.

The necessary safety arcs covering the wide span of live ranges in use and the potential for injury inside the killing house prevented me getting close during this event, so after covering The Great Escape I turned my cameras on the teams themselves. On both OpSec and national protocol grounds we have had to disguise most operators’ faces, but as you will see from the accompanying images most of the guys were more than happy to pose for team photos on the understanding that their identities would not be compromised.

The Belarus team waiting for their turn at McQUADE [© BM]

After all forty teams, split into two batches and alternating between The Great Escape and McQUADE, had taken their turn at the sniping challenge Jordan’s Royal Guard were in fifth place for this event, the Royal Oman Police team were running fourth and Jordan’s Gendarmerie were third. The Kuwait Ministry of the Interior Police SWAT surprised many by claiming second place but, as expected as they are always good at this type of event, China’s elite Snow Leopards police team came first; this particular mix of Killing House and medium range sniping skills seemingly favouring police over military SpecOps teams.

Day Four of the competitions saw the teams participating on Time’s Up and House Of Terror events, but these will have to wait for another day.