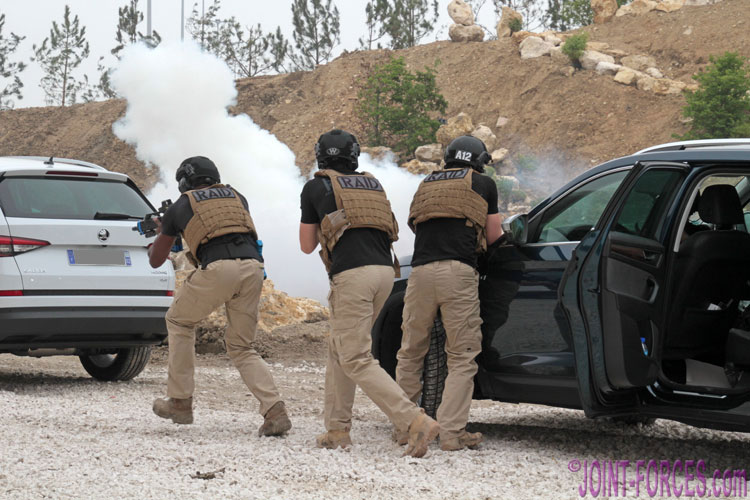 The day before the Eurosatory 2018 defence and security expo opened at Villepinte in Northern Paris, four elite Police and Army Special Forces units demonstrated aspects of their roles and capabilities in front of specialist media, writes Bob Morrison.

The first of these four demos, which was preceded by a mobility display by two of their armoured tactical vehicles (see DAGGER and TITUS), was undertaken by a CP (Close Protection) detail from RAID. This term, derived from Recherche, Assistance, Intervention, Dissuasion (or Search, Assistance, Intervention, Deterrence in English), is an elite French National Police Counter-Terrorism Special Intervention Unit tasked with “protecting major political and cultural events” and “performing close protection missions for extremely threatened personalities”.

RAID is an approximately 320-strong formation of highly trained male and female police officers comprising around 180 operatives based in Paris, in three sections broken down into Direct Action, Research & Development plus Intelligence and Negotiations & Crisis Management functions, as well as seven 20-strong regional teams. They work closely with other highly specialist Police units, such as BRI which we will also cover, and have most recently been seen in public at major counter-terrorist operations in response to the January and November 2015 Paris attacks.

Raiders speedily debus and prepare to pin down the attackers [© BM]

The scenario for this demo at Eurosatory was set around the ambush of a VIP motorcade by armed terrorists; the unit is also tasked with protecting French politicians, diplomats, dignitaries and high profile public figures at home and overseas. During this kind of mission Raiders, which is what these operative are called, are equipped with assault rifles, 9mm pistols and 40mm grenade launchers plus both smoke and offensive grenades.

The Terrorist (Tango) attack was initiated by an IED (Improvised Explosive Device) ambush designed to damage and disable the vehicle the VIP was travelling in and was followed up by an armed assault by both vehicle-borne and static Tangos. In such a situation the Raiders must react immediately, with each operative undertaking a precise task and covering a well-defined surveillance area, in order to both eliminate further threat and extract all personnel from the scene as quickly as possible.

The situation here was possibly the worst a CP team can encounter, as the armoured VIP vehicle in the motorcade was not only disabled, with its occupants injured, but forward progress was blocked by a vehicle full of armed Tangos and more armed attackers (including the trigger man for the IED) were firing down on the motorcade from high ground on the right flank. In such an attack Raiders must physically recover and protect the VIP and his driver and escort (other members of the RAID team), fighting aggressively against the attackers, while keeping a clear mind and extracting as quickly as possible from the combat zone.

Those Raiders assigned to confront the attackers must fix them using overwhelming firepower and use smoke grenades to prevent terrorists from accurately aiming and seeing the VIP extraction underway. Once the extraction is performed, the team must withdraw immediately from the combat zone, choosing one of the escape routes planned during the advance recce; it is often said no plan survives first contact with the enemy, but equally surviving contact is often only possible if alternative plans have been made.

From the moment of the IED detonation to departure of the last RAID armoured saloon, with everyone removed from the disabled vehicle and all Tangos downed, took exactly three minutes.