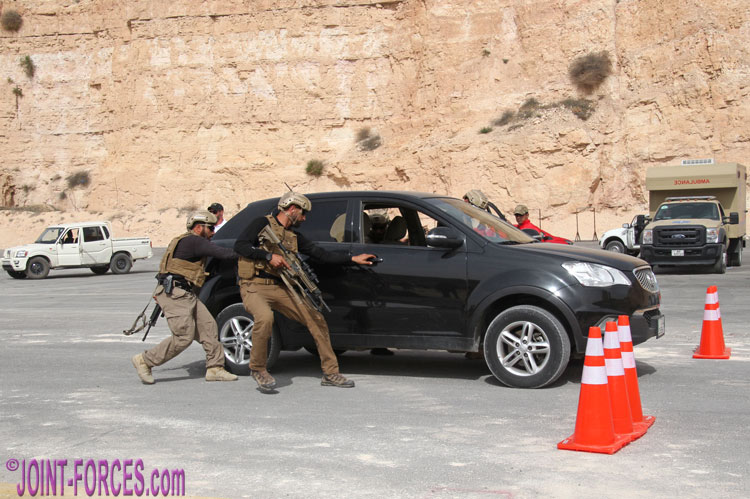 The Great Escape, covered here, was a drive & shoot challenge where one operator drove his four companions around a high speed track in a compact SUV then they debussed three times to engage a phalanx of targets before they all headed to the end of the course for a sprint to the box. While 20 of the teams took it in turn to compete in this event, the other 20 participated in McQuade, which we will look at in the next article in the series, with the two batches swapping around after a lunch break.

There has been a drive & shoot at each of the three Warrior Competitions I have attended since 2014 and each one has followed a different format. In addition to urban road and off-road track circuits at KASOTC, there is also a stand-alone 1,000-metre high speed circuit with both compound curves and high speed straights in addition to limited sight line curves and inclines plus junctions, and even a teardrop to reverse and effectively double the course length available for a speed run.

For The Great Escape event this year the teams had to travel about 600 metres on tarmac, in some places on loose pebbles and dust, on a slalom course between traffic cones on the most bendy part of the circuit before reaching the first firing point. At this position four operators raced from the Korando to the bench, loaded their assault rifles with pre-positioned magazines containing a fixed number of rounds and then engaged banks of Figure 11 size falling steel targets, attempting to take down as many as possible with the rounds allowed.

When all magazines were empty and rifles were made safe, the shooters returned to their small family SUV, a tight squeeze with three in the back all wearing combat helmets and body armour, then the driver raced off to the second firing position / bench where the serial was repeated. Between first and third firing positions the going was very loose, mostly on slightly compacted quarry gravel, and hairpin turns were included to upset the shooters’ equilibrium; the gamble was whether to drive fast and make the shooters queasy or take it slow and get them to the next bench in a relaxed state to ensure better hit rates.

To complicate matters, not only were the three benches at different distances from the targets, but the three lies of targets also varied in distance from the quarry wall behind plus the angles were such that if some of the right bank were missed from the first bench it was increasingly hard to hit them from second and third benches. In addition, two GovSource judges moved straight between each firing point on a buggy to allow them to monitor both weapons handling (for any safety infringements) and observe target hits or misses from the teams’ perspective, while other judges also kept scores from overview positions.

After the last set of magazines was emptied at the final firing point the operators had to quickly get back into their vehicle and, after being driven to the Stop cones, all five had to debus and sprint to the Finish Box. The stopwatches kept running until the last man was in the box as both overall time and hits on target counted in this event; some teams with a reputation for superb shooting skills did much worse than might have been expected on The Great Escape, but that is unsurprising as not everyone is used to leaping out of a tumble drier and immediately hitting targets with accurately placed single shots. Once all scores had been tallied, Lebanon’s IDSF took fifth place behind the Stanislaus County Sheriff team from California, with the Chinese People’s Armed Police Force Snow Leopards in third. Austria’s COBRA were runners-up and Poland’s BOA won The Great Escape. Austria’s COBRA at the first firing point – one judge watches the bench while the other watches the targets – they finished this event in second place. [© BM]