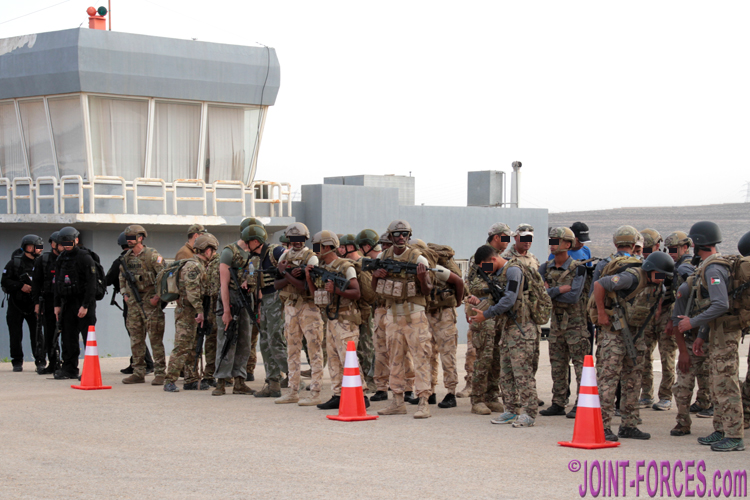 Day Two of the 10th Annual Warrior Competition for international Special Operations Forces teams, held in Jordan, commenced at 07:00 on 1st May with the punishing GUT-CHECK event, writes Bob Morrison.

Intended “to level the playing field” according to Eric the CEO of GovSource, whose company both conceived the challenges and provided the Directing Staff, GUT-CHECK was a long distance event run against the clock with all 40 teams participating in a mass start of 200 competitors (five members from each seven-man team took part). The precise length of the course was not given, but general consensus was that competitors covered about 12 to 14 kilometres from the mass Start Line, on the helipad at the Jordanian Special Operations Force base which adjoins KASOTC, around the quarry complex and down to the Finish Line on one of the shooting ranges.

To add a complication to what was already an onerous cross-country tab wearing body armour load vest and combat helmet – to prevent overheating while exerting oneself it was acceptable to carry the latter rather than constantly wear it – and carrying 20lbs or 9kg of sand in one’s daysack in addition to an assault rifle, an unexpected casualty was thrown in as a complication. Some distance from the Finish, at a seemingly random point on the course which could not be clearly seen until the competitors had almost reached it, one member of each team was declared to be a casualty.

Teams no doubt expected a stretcher carry at some stage, but this one had a twist. The casualty’s colleagues had to administer an intravenous drip (Ringer’s Solution), load him onto a lightweight fabric stretcher, and carry him over rough tracks several hundred metres to the Finish Line. In an ideal world the weakest soldier would be the one to benefit from being carried round the remainder of the course and the team medic would administer the IV… but combat does not take place in an ideal world, and neither does Annual Warrior Competition.

Fortunately, virtually all Special Operations personnel learn how to administer a drip. Unfortunately, while some are as careful and gentle with a needle as an experienced ward sister, some others have the hands of an apprentice butcher wearing mittens. At times the air on that hillside turned blue as hapless casualties berated the needlework of guys who until then they had probably considered to be closer than a brother.

By 09:00 the first of the teams had made it to the Finish Line down on the quarry floor, beating the two hours that the GovSource team required to validate the course. The slowest teams, who in the main were around half the age of the DS validators, took over three hours to finish.

At the start line it was presumed that the two Chinese PAPF teams and the Jordanian Royal Guard team would end up vying for podium places, as this type of endurance event is right up their street. Nothing about Warrior Competition can, or should, be taken for granted. At the final reckoning, the Royal Guard finished fifth and China 2 slid in ahead of them in fourth, but it was Austria’s COBRA who took third place, behind the Snow Leopards of China Team 1, who were beaten by the Belarus Special Operations Force team. That feat by Belarus surprised many observers.

Although nearly all forty teams completed GUT-CHECK, about half of them failed due to either racking up too many penalty points – for example dropping scores because some individuals had to fall out through injury – or due to not crossing the Finish Line within the allotted time. Although total times were critical, sometimes it made more sense to set a slightly slower pace and get home in one piece rather than blindly racing to try to catch up the team ahead.

By 13:00 on Day 2 the teams needed to have fed and watered themselves and sorted out their kit for the next event, PIPE HITTER, where their shooting skills would now be the primary focus.

Footnote: Some governments insist that the anonymity of SOF and SF personnel is preserved so to be on the safe side we have obscured all operatives’ faces unless they specifically asked us not to. Daysacks were weighed by GovSource DS, witnessed by a judge, to ensure they still contained 20lbs of sand at the Finish Line [© BM]