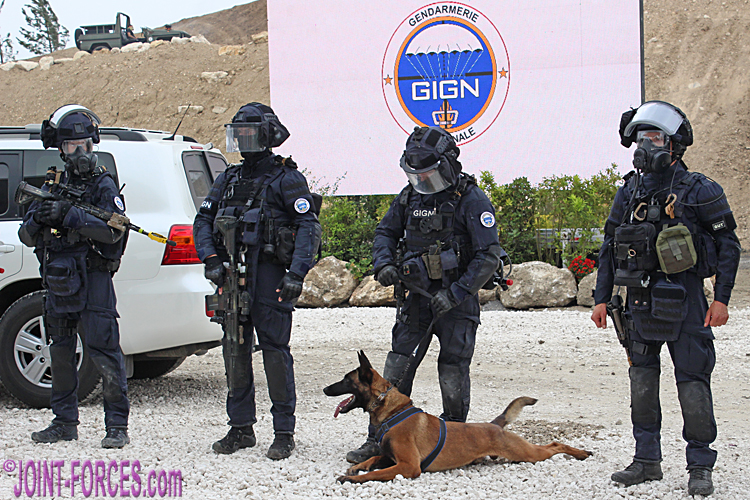 Formally created in 1974, expanded in 1984 and extensively reorganised in 2007, Groupe d’intervention de la Gendarmerie Nationale (GIGN) or National Gendarmerie Intervention Group has been to France what the SAS Special Project Teams have been to Britain and if anything their operational track record exceeds that of their cousins on the western side of the Dover Straits.

Quite often seen on newsreels in recent years, as a result of France having to combat a wave of high profile terrorist attacks against the civilian population, these days the unit is a little less camera-shy than in the past and, along with other French counter-terror units, this year it even laid on a public exhibition of its capabilities at the EUROSATORY defence and security expo in northern Paris. Both personnel and specialist vehicles took part in a dynamic display under the scrutiny of specialist defence media, including Carl Schulze and myself for JOINT-FORCES, on the day before the show opened.

For those unfamiliar with the Gendarmerie concept, something we do not have in the United Kingdom, Gendarmes are basically professional military personnel who also have civil law enforcement powers and are primarily used for internal security duties. Some other NATO nations which have Gendarmerie, often with an elite sub-unit which has a counter-terrorist role, include: Italy ~ Carabinieri, Poland ~ Żandarmeria Wojskowa, Portugal ~ Guarda Nacional Republicana, Spain ~ Guardia Civil, and Turkey ~ Jandarma Genel Komutanlığı.

There are two ways of deterring those out to burgle you home or business; you post Beware Of The Dog notices or you can let everybody see the snarling beast at loose in the yard. In 2018, on the Homeland Security side of things France has sensibly opted for the second method by allowing its elite Police, Gendarmerie and Army counter-terror units to appear in front of the media to show a little of what they are capable of.

The GIGN scenario at EUROSATORY 18 involved a group of terrorists who had taken hostages and were holding them in two buildings, one of which was two-storey, formed out of shipping containers. Two of the terrorists, one of whom was wearing a suicide vest, dragged out one of the hostages (all participants including role-players were GIGN operatives, hence the masks) to publicly execute him to show they meant business.

To illustrate operatives’ trust in each other and their skills, the ‘execution’ was carried out using live ammunition with the ‘hostage’ wearing a shotgun clay on his body atop two bulletproof vests. His colleague stepped back well over ten metres and then proceeded to shatter the clay with an issue Smith & Wesson 686 revolver; I doubt they would have got away with that in the UK without old Elvin Zaifety stepping in to spoil the spectacle. Scroll to near the bottom for a photo.

This ‘execution’ triggered the predictable counter-terror team response and two terrorists, one outside the single storey building and one inside, both represented by blue balloons, were soon taken out by unseen GIGN snipers off to our right. Just before an assault team inside and on top of a Sherpa Light armoured personnel carrier with access platform and ladders raced in to tackle the two-storey target building, a breaching team clandestinely approached the single-storey building from the blind side to place a frame charge against a side wall with no doors and windows in order to effect a speedy entry; at this stage, having spotted approaching GIGN operatives, one of the terrorists stepped out and activated his suicide vest but he was not close enough to the assault teams to have any effect.

Simultaneously to the Sherpa arriving at the front of the two-storey building another assault team raced in from the left in a Centigon Fortress 200 Intervention Vehicle (one of three participating in the demo) and once they were in position to move forward the breaching team blew a hole in the wall of the single-storey building as a breacher atop the Sherpa blew in a first floor door on the other building. A coordinated attack by three GIGN teams was now launched on both buildings and within seconds all identified hostiles had been taken down and the remaining hostages had been recovered; however, to ensure no terrorists were posing as hostages all were lined up, covered by armed operatives, while a weapons and explosives dog ran its nose over them before they were patted down to ensure no concealed weapons or devices had been missed.

To give readers an idea of just how fast-paced this demo was, from the suicide bomber triggering his (training) vest as the GIGN assault commenced until the sniffer dog checked out the kneeling role-players took just one minute and fifty seconds! GIGN originals with the equipment at their disposal, circa 1974 [© GIGN]