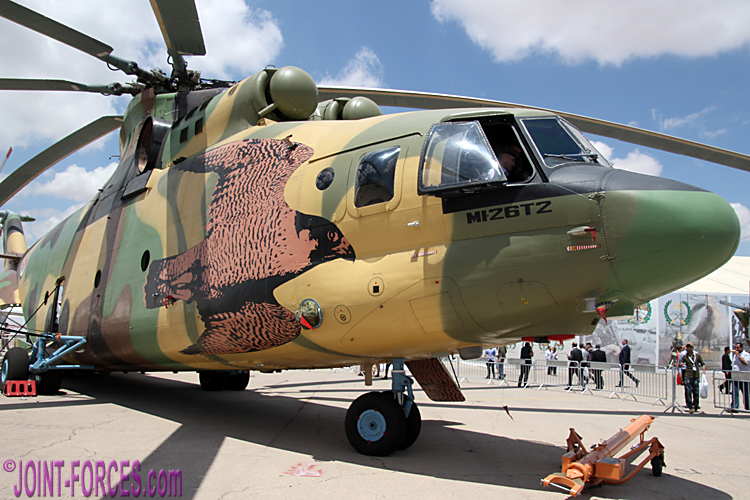 Manufactured at Russia’s Rostov Helicopter Production Complex, which also produces both the Mi-24 ‘HIND’ and Mi-28 ‘HAVOC’ military helicopters, the Mi-26 ‘HALO’ is the world’s largest helicopter. In 2015 Jordan ordered four of the latest T2 version, which has an advanced avionics package allowing both aircrew reduction and night flying capability, and the first of these was delivered in mid-January of this year.

Troops and cargo, including light armoured vehicles, can be loaded through the rear clamshell doors [© BM]

Based at Marka military air base this helicopter, tailcode 06819, made its first public appearance at SOFEX 2018 (held on the other side of the airfield) at the beginning of May, where JOINT-FORCES.com was able to photograph it shortly after it was moved into position as centrepiece of the static displays; unfortunately it was not flown out until after my return so no in-flight photos were possible on this visit. With an empty weight of around 28 tonnes and a 20 tonne payload capacity, the eight-bladed HALO is a truly imposing aircraft when viewed from the outside but it is only when one steps into the cavernous troop/cargo compartment that its size really hits home.

I was fortunate to be allowed aboard an Mi-26 HALO at the 1984 Farnborough Air Show, which I believe was its first appearance in the UK as it had only been accepted for service the previous year, so this was not the only time over the last 34 years that I have seen one, but when I climbed up that rear ramp at Marka I confess I was still slightly overawed. Used for Humanitarian Assistance missions – the United Nations regularly uses this type of helicopter for Disaster Relief – in addition to its military transport roles, the Mi-26 can transport 82 paratroopers with full equipment making it comparable to a stretched C-130 Hercules without the limitation of requiring a runway.

The Jordanian Mi-26T2, which has a cockpit crew of four rather than five, plus one or two loadmasters dependent on mission, is built to the latest (i.e. 2015) HALO production standards making it not only the largest but also one of the most modern military transport helicopters in service today. Part of the ongoing Jordanian Armed Forces modernisation programme, it is being primarily used for both Homeland Security and Humanitarian Assistance work in the country’s border regions with strife-torn Syria and Iraq.

In theory a complete Quick Reaction Force battalion group could be flown anywhere in the country from the Amman area in just a couple of hours by a single four-ship HALO formation once the full fleet of four is in service. The massive HALO, seen here during the SOFEX build-up, can carry 20 tonnes either internally or underslung [© BM] Seen from the starboard rear, with clamshell doors closed, during SOFEX build-up [© BM] 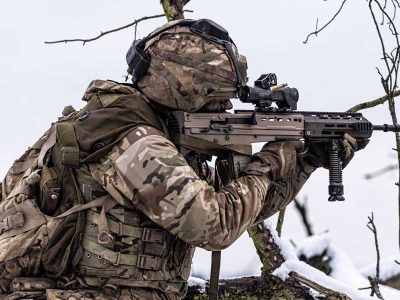