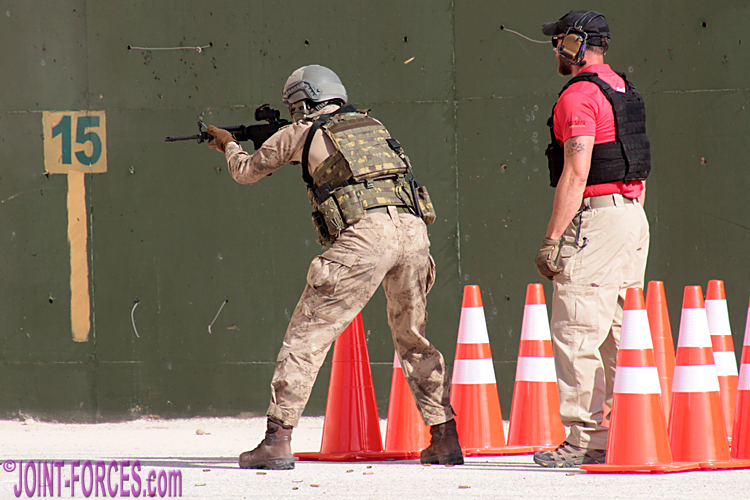 On the afternoon of the first full day of the 10th Annual Warrior Competition, following the impressive Opening Ceremony and Special Operations displays, the competitive events commenced with the Trijicon Top Shot, writes Bob Morrison.

Unlike events during the following week at KASOTC (King Abdullah II Special Operations Training Center) which each involved five team members out of seven the Top Shot competition, sponsored by optical sights manufacturer Trijicon, required just one participant from each of the 40 teams representing 24 nations. Nominated by the teams themselves, the competitor was their best all-round shooter as this event required an operator who was not only highly skilled on pistol, assault rifle and shotgun but also able to hit maximum targets in the shortest time while under pressure.

Three bays of one of the KASOTC 25-metre shooting ranges were used for the event and competitors were split into pairs with one starting at each side to work through banks of targets and meet in the middle of the central bay for, hopefully, a final shoot-out against side-by-side Texas Star swinging targets. Non-competing team members plus any travelling supporters were allowed to pack the rails behind the bays to cheer on their guys and provide encouragement.

The previous evening – i.e. about 15 hours before the Opening Ceremony – the teams were invited to a social event (without alcohol of course, as KASOTC is a dry facility) to break the ice and to try to encourage them to mingle. This time (my third Warrior Competition) I asked to be allowed to attend the social, primarily as I wanted to meet as many Team Captains as possible to reassure those whose national policy is to preserve the anonymity of Special Forces and Special Operations personnel that although at times over the next week I might be sticking my camera in their faces I would fully respect the guys’ right not to be identifiable if this was desired.

With effectively 280 alpha males from 40 different packs brought together in the same place, each competing to try to ensure his pack was at the very top at the end of the week, one could be forgiven for thinking the atmosphere in the marquee might have been tense. However the Special Operations world is a small, elite club and quite a few of these guys had trained, or even operationally deployed, with each other before so a lot of old friendships were renewed and introductions made between team members of different units; at Trijicon Top Shot next day it was therefore by no means unusual to see teams who could be potentially be competing for the podium at the end of the week cheering on other teams’ shooters.

Each shooter started from a box of cones at either the left or right end of the three bays on a given signal from the Range Officer and made his way (there were no female competitors this year but there have been in the past) towards the middle with a highly experience SpecOps instructor shadowing him and watching for any infringements or issues. In this Forward & Lateral Movement stage through the outer range bays each competitor had to engage a specific number of Figure 11 size steel falling targets, constantly moving towards the middle on a marked course where the distance varied and changing magazines on the move as and when required, using no more than a given number of 5.56mm rounds supplied by the range team.

On reaching the side wall of the outer bay the competitor then had to enter the centre bay and pick up a pre-positioned Remington combat shotgun, load it, engage a number of clays on a rack using a limited number of rounds, make the weapon safe, then progress to the next firing position. The shooter then had to move closer to the middle of the bay and engage a rack of five dropping plates with a 9mm Glock pistol before moving to the final firing position where Texas Star rotating falling plate targets had to be taken out.

The first added complication was that not only did the shooter have to drop all targets inside a given time to successfully finish the course, but another shooter was also racing in from the other side and the first one to drop the last target would win this round. The second complication was that rotating Texas Star… with an opponent almost breathing down one’s neck was it better to wait until the the plate oscillations reduced or to try to be quickest should the shots be taken while the targets were still moving?

On more than one occasion I saw a quick-firing and nimble shooter reach the last firing position while his opponent was still on the shotgun stage, only to lose out as he was not prepared to throw caution to the wind and gamble on hitting a swinging target. Sometimes fortune favours the bold, but equally sometimes the tortoise can outsmart the hare. The inclusion of that difficult set of targets at the end really racked up the pressure, often ensuring that only those who could totally focus on the task and could shut out all distractions came away winner of the heat.

To reach the final shoot-out the last pair of shooters would have to repeat this feat not once, or twice, but five more times during the course of a long afternoon. As the sun dropped behind the high quarry walls, Jordan’s Special Unit 2 (formerly CTB 71) shooter took third place and a Lebanese Black Panther took second.

The winner of the 10th Annual Warrior Competition Trijicon Top Shot event was a member of the Kuwait National Guard team. The final shoot-out during one of the heats – GovSource provided the co-ordinators, instructors, judges and range officers who in the main were American and Jordanian able to speak Arabic as well as English [© BM]