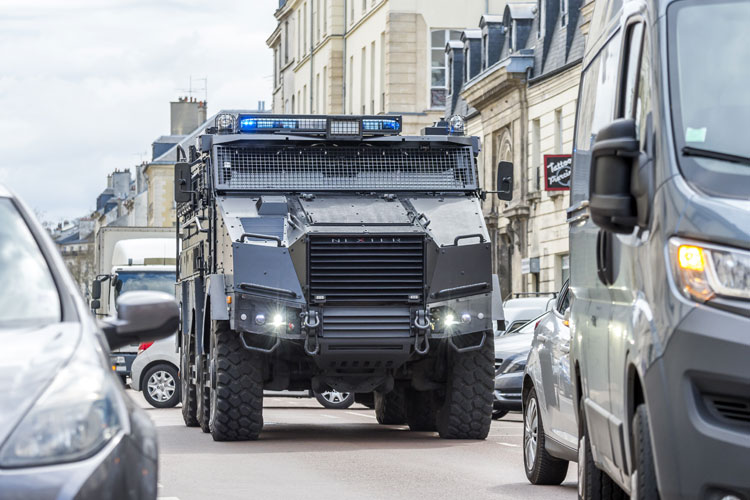 The NEXTER TITUS is a highly mobile 6×6 armoured vehicle capable of transporting ten personnel plus three crew in high threat environments which has been evaluated and operationally deployed by RAID.

Currently on order in quantity with the Czech Army as a Mechanised Infantry Vehicle for rapid reaction forces, TITUS is built by French manufacturer NEXTER on a Tatra 6×6 chassis. Tipping the scales at around 27 tonnes when fully loaded but capable of a top road speed of 110km/hr, or around 69mph, TITUS has a very tight turning circle of just 13 metres radius courtesy of front and rear steering axles so it is very useful in urban situations despite its bulk.

In addition to a crew of three, the vehicle can transport a full 10-man (or woman of course) assault team plus all kit under STANAG 4569 Level 2 ballistic protection and the V-shaped hull is said to be capable of withstanding a massive 50kg IED while also defeating 7.62x30mm armour piercing rounds fired from just 30 metres. Dimensionally it measures approximately 7,750mm long by 2,550mm wide (without running boards) by 2750mm high to top of hull. For infantry use a Remote Control Weapon Stations with the capacity to mount a weapon up to 25mm calibre can be fitted above the cab and two light machine guns can be mounted beside the rear roof hatches, but if deployed in the Homeland Security role the RCWS would not be fitted.

TITUS has been deployed by French Police Special Forces, and indeed the vehicle participating in the RAID demo at Eurosatory carried both their markings and the legend ‘From Active Service With French Police Special Forces’ down both sides. However, as far as we can discern it has not been disclosed whether this personnel carrier has been bought by the Government or is merely on loan (it is not unusual for vehicle manufacturers to loan trials vehicles to police authorities for extended evaluation).

Operationally, TITUS was used by RAID while providing security cover for the 2015 Paris Climate Change Conference. The images on this page of TITUS on the streets of Versailles, supplied by NEXTER, were taken on 12th and 13th April 2016 at a time when tensions were high following the arrest of suspects linked to the November 2015 Paris attacks and the charging in neighbouring Belgium of two suspects linked to the Brussels Airport and Metro attacks in March 2016.