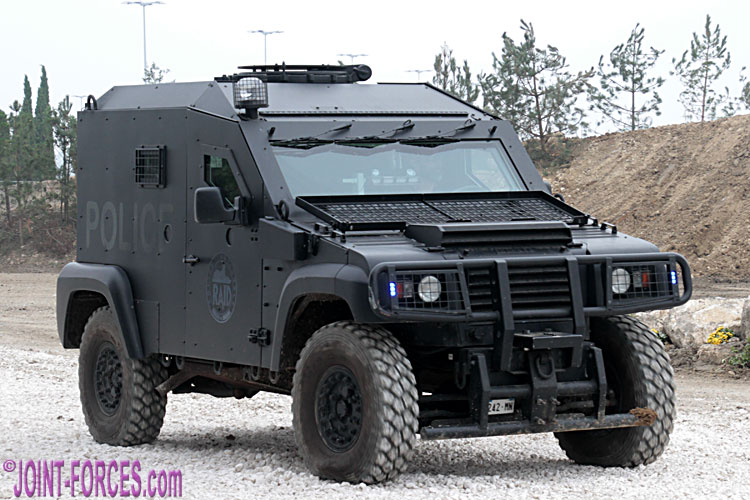 The DAGGER PVP, the light armoured command and liaison vehicle used by France’s elite National Police RAID counter-terrorist teams, was put though its paces during the dynamic displays at Eurosatory 2018.

Originally ordered from Auverland in 2005 by the French MoD as the PVP (Petit Véhicule Protégé or Small Protected Vehicle) to replace the earlier Peugeot/Panhard P4 light armoured vehicle, today this armoured 4×4 is marketed by ARQUUS (the new name for the group which includes, Panhard, Renault and Volvo military truck brands) as the DAGGER. According to the manufacturer, “more than 1,200 DAGGERS are in service in the French Army and in a number of countries in Europe, Africa and South America”.

The DAGGER is a light – 5.5 tonnes GVW – armoured command and liaison vehicle which offers excellent protection levels in its category; ballistic, anti-tank mine and IED protection are quoted as complying with STANAG 4569. Available in both three- and five-door configuration, the DAGGER is in use in command & liaison, internal security and troop or personnel carrier roles.

According to information supplied to JOINT-FORCES.com by RAID, their vehicles are configured for two up front and six on jump seats in the rear. The armoured body offers STANAG 4569 Level 2 protection for the passenger compartment and Level 1+ for the engine compartment; the armoured windows offer the same ballistic protection as the armoured structure.