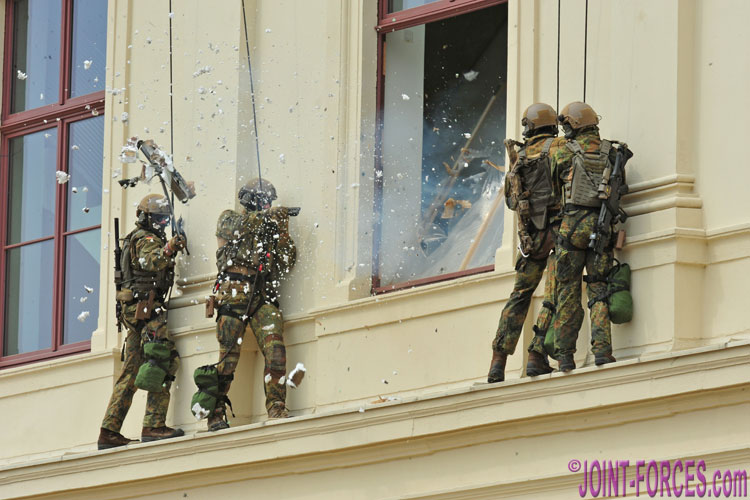 Usually kept away from public view, during the 2018 Tag der Bundeswehr – the Open Day of the German Armed Forces – on the 9th of June the KSK demonstrated some of their capabilities at the Militärhistorisches Museum der Bundeswehr in Dresden.

Insignia of the Kommando Spezialkräfte, the Special Forces of the German Army [© CS]

The smallest operational asset within each Kommando Kompanie is the Kommandotrupp that consists of four operators, among them a weapons and tactics specialist, a communications specialist, a medic and a breaching specialist.

Among others, the tasks of the KSK include conducting hostage rescue and non-combatant evacuation operations, acquiring information with key strategic importance in crisis and conflict zones, conducting direct action missions in order to neutralise terrorist and irregular forces threats, and conducting combat operations within conventional and asymmetrical conflicts with the aim of neutralising targets with high strategic or operative value.

During this year’s Tag der Bundeswehr the KSK demonstration featured a small-scale hostage rescue operation. As part of this demonstration the KSK operators worked closely with the Hub schrauber geschwader 64 (HSG 64) which is the rotary aviation unit of the Luftwaffe German Air Force responsible for providing aviation support to the KSK.

A second H145M circles around the scene, operators on board providing overwatch with their 5.56mm G36KA4 carbines [© CS]

Seconds after arriving on the roof the operators abseil down the front of the building. In next to no time they reach their designation, a large window, and take up positions left and right of it. Now things happen at double quick time.

The breacher of the team places a breaching frame rigged with explosives against the window. A split second later the window disappears in a deafening crash and a bright flash. With the window gone the operators rush into the room, their 9mm P8COMBAT pistols at the ready in order to allow them to counter any threat. Now the first room has been cleared, the operators rush through the building, quickly making their way to the hostage and neutralising any threats on their way.

With the hostage rescued it is now time for the ground element of the KSK to move in to extract the hostage and the rescue force. Fielding two heavily armed Aufklärungs- und Gefechtsfahrzeuge (AGF) Serval reconnaissance and combat vehicles and an Einsatzfahrzeug Spezialisierte Kräfte (ESK) Wolf troop carrier the ground element establishes a security perimeter around the objective before the hostage is brought out and the troops hop onto the vehicles.

It is at this point that the enemy has recovered from the shock action of the KSK and begins to put up stiff resistance. The vehicles of the KSK ground element are engaged from a roof top with machine gun fire. The threat is immediately silenced by fire from the 7.62mm MG3 and 12.7mm M2HB machine guns of the AGF Serval while the ground force continues to extract from the area. Featured, Kommando Spezialkräfte, KSK, Special Forces
You may also like