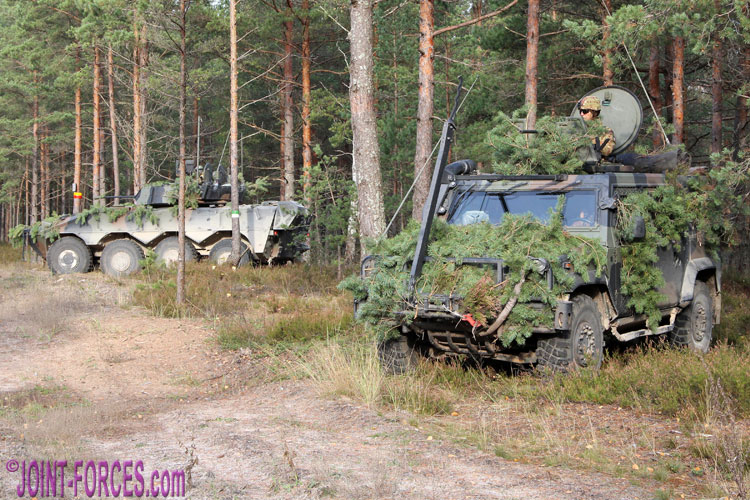 Late in 2017, while in Latvia covering the first roulement of the Canadian-led eFP (enhanced Forward Presence) multinational NATO battlegroup based at Adazi, we seized the opportunity to snap the armour used by Italy’s 9º Reggimento Fanteria.

The Italian company group drawn primarily from the 9th Infantry Regiment deployed on what their MoD calls Operazione BALTIC GUARDIAN were mechanised infantry equipped primarily with FRECCIA (ARROW) 8×8 Armoured Infantry Fighting Vehicles but a small number of the 4×4 LINCE (LYNX) Light Armoured Vehicles were also fielded for Command & Liaison and Ambulance duties. Although the LINCE is in service with over a dozen other nations, including the UK which calls its variants PANTHER and even Russia, normally the homegrown FRECCIA is seldom seen outside of the Mediterranean region, ISAF duties in Afghanistan excepted, so it was interesting to see how the pair and their crews coped with the challenging, sometimes waterlogged, moorland and forest terrain found close to the Baltic Sea.

The 9th ‘Bari’ Infantry Regiment (9º Reggimento Fanteria) which maintains the traditions of the historic Queen’s Regiment of Savoy, is an all-volunteer battalion-strength (in peacetime) formation and part of the Pinerolo Mechanised Brigade. Based at Trani near the top of the heel of Italy, the battalion comprises the Headquarters Company, three Fusilier ( Fucilieri ) Companies and a Manoeuvre & Support Company. After three rounds of post-Cold War restructuring of the Italian Army between 1991 and 2002 it was decided to re-equip the Pinerolo Mechanised Brigade with modern wheeled Infantry Fighting Vehicles to replace their aged M113 Armoured Personnel Carriers (known as VCC-2 in Italian service). This new vehicle, christened VBM (Veicolo Blindato Medio) FRECCIA, was built by Italian manufacturers Iveco and Oto Melara on the hull of the earlier B1 CENTAURO armoured anti-tank vehicle. The first order placed by the Italian Ministry of Defence, in 2006, was for a total of 253 vehicles of which 172 were to be standard IFVs fitted with a Hitfist Plus turret, 36 anti-armour versions intended for the brigade’s Manoeuvre and Support Companies would also have Spike-LR launchers on Hitfist turrets, 21 examples destined for the same companies would be fitted out as 120mm mortar carriers, 20 would be configured as Command & Control variants, and the remaining four would be modified as battlefield ambulances. The Infantry Fighting Vehicle FRECCIA can carry a squad of eight troops in addition to its crew of three; commander, gunner and driver. Primary armament is an Oerlikon 25mm KBA automatic cannon, with 200 rounds stowed on board, and two 7.62mm machine guns are also fitted; one is coaxial with the cannon and the other is turret mounted on the left. Powered by a 560hp Iveco 5HP-1500 V6 diesel engine, the 28 tonne FRECCIA can achieve a top road speed of 105km/hr (65mph) and can travel off-road at 30km/hr (19mph) over good going. I photographed these vehicles on three separate occasions on different days during Exercise SILVER ARROW ’17 on the Adazi Training Area in Latvia and did not spot any in difficulties, though as the crew were skilled professionals who had been in-theatre for a few months one would have expected them to have come to terms with the at times challenging terrain and worked out how to get the best from their steeds. The VTLM (Veicolo Tattico Leggero Multiruolo) LINCE (LYNX) is the standard armoured command and liaison vehicle of the Italian armed forces, in service since 2001 with over 2,000 examples initially being ordered for all arms and subsequent orders having been placed to almost double the fleet. Britain ordered 401 vehicles (the original requirement was 800) in late 2003 as PANTHER, for its Future Command & Liaison Vehicle programme, but it was reported in late April this year that the fleet was being cast as surplus to requirements. In standard configuration the LINCE can transport driver plus four passengers (one plus three in PANTHER) under STANNAG Level 3 armour protection in its main compartment with their personal kit and equipment being stowed in the cargo compartment above the rear wheels. Gross vehicle weight is 6.5 tonnes and a cargo payload of 1200kg can be carried at road speeds up to 130km/hr (80mph). A Remote Weapon Station (RWS) can be fitted to LINCE but the vehicles we photographed on eFP duties in Latvia mostly had just a 12.7mm Heavy Machine Gun on a standard ring mount for self-defence, operated by the fifth crew member. A small quantity of ambulance variants has been procured by the Italian Armed Forces and we were fortunate to photograph one of these in Latvia. We did not, however, have the opportunity to see or photograph the interior to ascertain exacly how many patients can be carried; we suspect configuration to be one stretcher rack on the right side and seating for three on the left.