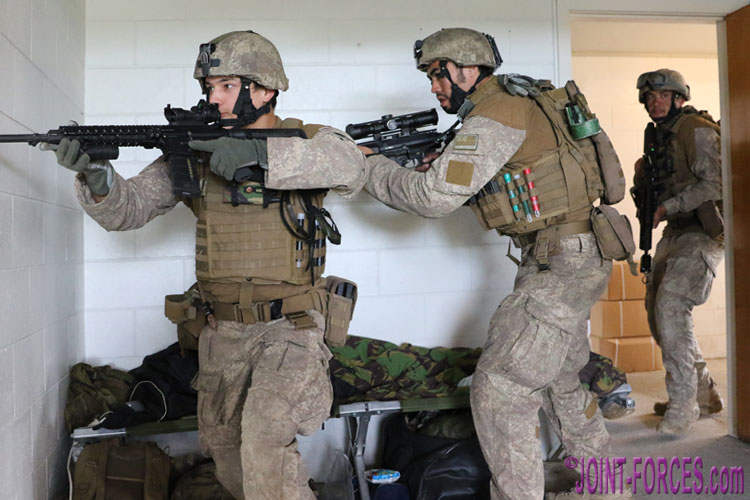 The New Zealand Defence Force (NZDF) held Exercise SOUTHERN KATIPO, the largest ever in the series, over a six-week period from 2nd October through until November 2017, writes Gordon Arthur.

More than 100 vehicles, seven ships, six helicopters, 17 aircraft and 33 unmanned aerial vehicles (UAV) were involved in this wide-ranging event that put all three services of the NZDF through their paces to test their expeditionary capability alongside foreign counterparts in the northern half of the South Island.

One section of 2/1 RNZIR trialled a new uniform cutting and webbing, seen here – this soldier is carrying a 7.62mm AR-10 Designated Marksman Rifle produced by LMT and fitted with a Leopold 4.5-14x scope [© Gordon Arthur]

Lieutenant Colonel Martin Dransfield, the exercise director, noted, “Exercise SOUTHERN KATIPO 17 was designed to build on the objectives and lessons identified in 2015 in order to further enhance New Zealand and the NZDF’s ability to lead a Combined, Joint and Inter-agency Task Force in a challenging operational environment.”

He told us that the 2017 exercise covered an area three times larger than SOUTHERN KATIPO 2015 in order to challenge the logistics tail and communications. In terms of personnel numbers, it was some 50% larger, plus it involved other government agencies (e.g., Ministry of Foreign Affairs and Trade, Ministry of Health), NGOs (e.g., Red Cross) and civilian role-players.

The colonel said key aims of the exercise were to deploy a combined, joint and inter-agency force to support a government-run evacuation, provide humanitarian support to the population, protect the population and counter adversaries. One evacuation of 160 role-players occurred from near Blenheim, by C-130 aircraft. A week later, more than 200 internally displaced persons were evacuated from Kaikoura by the multirole ship HMNZS Canterbury. This echoed reality, for the same ship helped evacuate trapped people after a large earthquake hit Kaikoura and cut off the seaside town on 14th November 2016.

The land-based force was organised into a Pacific Island Company, Southeast Asia Company, Australian Defence Force Company and, from New Zealand, Alpha Company of 2/1 RNZIR. Arriving by sea and air, they deployed over hundreds of kilometres to chase down a mobile and elusive enemy. As well as transporting troops and equipment by amphibious ships, maritime forces conducted patrols to gather intelligence and prevent arms smuggling. Aircraft, meanwhile, performed airdrops and transported troops and equipment around the South Island.

The NZDF was able to train with newly issued equipment. Most NZ Army soldiers, for example, were using the Lewis Machine & Tool CQB16 assault rifle with 16-inch barrel. Selected in mid-2015 and locally called the Modular Assault Rifle System – Light or MARS-L, it will take about 18 months to roll 9,040 rifles out to all units in four tranches. Left-handed soldiers appreciate the CQB16’s ambidextrous nature, while the improved optics are also a major step-up. The rifle’s range is 600m, compared to 300m for the old Steyr, and a range of new 5.56mm Mk. 262 Mod. 1 ammunition has been procured. The 40mm M203 under-barrel grenade launcher once fitted to the Steyr has migrated onto the MARS-L.

During the exercise, the Army also used 32 UAVs, mostly the DJI Mavic Pro issued at a rate of two per company and to combat engineers. Undeterred by bans on DJI products by both Australian and US militaries, a Kiwi company commander said it was a useful asset and that they would ideally be issued one per platoon. However, they can only fly in daylight hours. The Army is still exploring the use of commercial UAVs after it dropped the Kahu several years ago as it did not meet requirements.

The Army is also experimenting with the Aeryon SkyRanger UAV “aimed at providing insights into the likely implications for the Army of operating a military RPAS, while also identifying user requirements to be fed back into the Networked Enabled Army programme”.