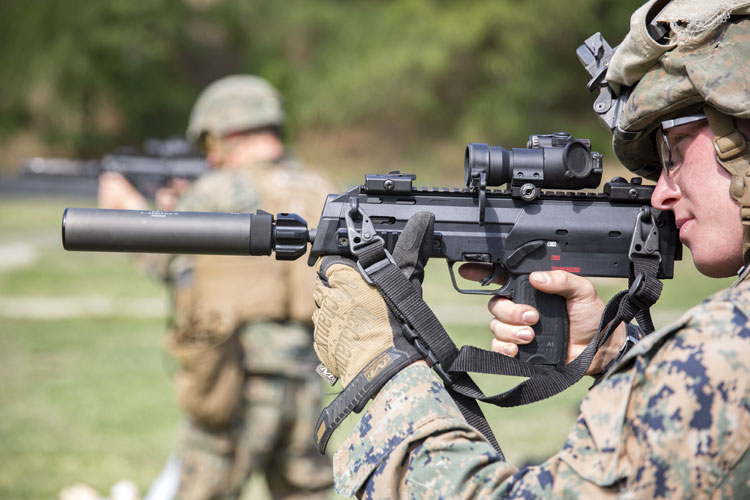 Richard Brown continues his retrospective look at one of the great military firearms enigmas, the Personal Defence Weapon or PDW.

As previously mentioned, in the late 1980s NATO came up with a revised requirement for a new breed of weapon to tackle the threat from the Warsaw Pact. A few select, NATO-trusted, small arms manufactures were given a rare clean slate to design a radical new platform with very specific requirements. Out of these complex requirements two highly innovative weapons systems were developed – the 4.6mmx30 Heckler & Koch MP7A1 and the 5.7mmx28 FN Herstal P90.

HK MP7
The MP7 was marketed as an unique tool which could do the job of both a pistol and an assault rifle. It could be fired one-handed due to its low, 1.9kg, weight and almost negligible recoil. It could also quickly be extended to a comfortable polymer SMG/AR-style weapon.

The weapon adopted a cocking lever identical (all be it much smaller) to that found on the M4 carbine, which sat well with those having years of M4 muscle memory. It had flip-up sights but was always best deployed with a compact optic such as the Aimpoint Micro T1. The barrel had locking lugs which could accept a ROTEX suppressor and, unlike the MP5, there were no delaying rollers to change for suppressor use.

Internally, the weapon was familiar to users of the HK416. The bolt was a conventional Stoner Rotating model and the short stroke piston was quick and efficient. A major user soon became the UK MOD Police who bought several thousand MP7-SF, single fire only, models in the middle of the last decade which phased out the double carrying of a Browning 9mm and an SA80 5.56mm.

The MP7 should have sold incredibly well, and some users are still keen on it, but the platform never caught on the way everyone thought it would. There was nothing fundamentally wrong with the weapon; if anything, it did the job too well. The main issue was the huge power of the round and lack of availability. The ball round was the most common and cheapest, but it displayed significant penetrative powers, too much power for safe urban use in most Law Enforcement environments.

Militarily, the weapon was liked but again the ammunition was its Achilles Heel. Other than elite SF units who had better resources, the availability of 4.6mm ammunition could never be guaranteed. I recall discussing the weapon in some detail with two military helicopter pilots. They carried MP5Ks in their cockpit as last-ditch defensive weapons and they genuinely liked the specifications and capability of the MP7. They conceded that it did (on paper) appear to be a far better survival weapon offering greater capability. However, they observed that when the 40 rounds of 4.6mm they could carry were expended then the weapon would become useless. At least with the older, less capable, MP5 there was always the chance of finding more 9mm ammunition to replenish the magazines. It was a difficult point to argue.

The MP7 is still in Heckler & Koch’s portfolio and sells in limited quantities to elite forces looking for a highly capable SMG, and that’s the key; it is viewed by users now as an SMG.

The P90 is a single moulded polymer lower receiver unit with a small metal upper unit which incorporates an optical sight. The weapon uses a top mounted 50-round polymer magazine and has a selector switch on the forward element of the hand guard offering semi-automatic and sustained fire. Again, the diminutive ultra-high velocity round produces virtually no recoil.

The magazine stores the rounds transversely and rotates them through 90 degrees dropping them into the breech. The empty cases are then ejected directly downward. When users first see a P90 a common reaction is that it will not be comfortable but nothing could be further from the truth. It is a very comfortable and instinctive weapon which naturally falls into the hands and shoulder. It is a good idea to find a hand grip that works and stick with it – I have seen three hugely experienced military shooters hold the same P90 in three different ways.

It is safe to say that the P90 PDW has also not been a huge commercial success for FN. It faced the same issues as the MP7. Ammunition was only made by one supplier and was fiercely expensive. The 5.7mm bullet also displayed significant penetrative capability, which greatly reduced the number of professional end users who were comfortable carrying the weapon. Not everyone liked the radical design and quickly the upper had to change to incorporate a Picatinny rail as the deficiencies of the built-in sight became known and users demanded red dots.

Like the MP7, the P90 is still in FN Herstal’s portfolio and is shown at defence shows but it is far from the front of the stand and no longer takes pride of place. However, some high profiler users still swear by it. If you take a walk round the grounds of The White House in Washington DC you will soon be confronted by a P90 as the US Secret Service deploy with it.

Conclusion
If you had to make a tactical choice between the two NATO weapons it would be tough. In their own way both are brilliant, highly capable, innovative, platforms. Crucially both delivered exactly what NATO wanted but by the time the weapons were fully operational the requirement had begun to die away, just like the Cold War.

Which takes us to the present day where we try to conclude whether the modern PDW has a future. Given the recent release highly capable 9mm rounds and some excellent SMGs such as the SIG MPX and the CZ Skorpion Evo I think we can say with some certainty that the era of the PDW is almost over.

They are now an anachronism of the Cold War and have little scope to evolve. Hence the 2018 P90s and MP7s are fundamentally identical to their original 1990s prototypes. Both platforms were built for a very specific job and that job really no longer exists.

They will however always be fascinating small arms which arguably took gun design to its very limit and for that attribute alone they deserve our professional respect as operators.