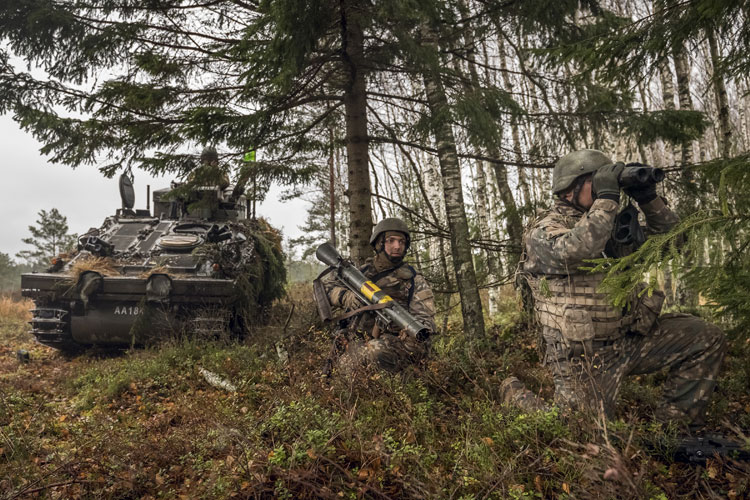 In late February 2014 the Latvian Defence Minister and the UK Secretary of State for Defence signed a Letter of Intent on cooperation on the mechanisation programme for Latvia’s Land Force Infantry Brigade.

Bob Morrison reports: As part of this mechanisation programme Latvia planned to acquire 120 refurbished and upgraded light armoured vehicles of the Combat Vehicle Reconnaissance (Tracked) or CVR(T) family formerly used by the British Army and RAF Regiment. Exactly six months later, on 27th August, the Latvian Ministry of Defence announced that details had been finalised and a total of 123 CVR(T) were being purchased “after their complete overhaul together with the standard equipment, tool sets and spare parts” for 48.1 million Euros.

The Latvian Scimitar is crewed by a commander, gunner and driver [© BM]

At this time it was also announced that some of these vehicles would also be upgraded with additional weapon systems, communication equipment, fire guidance systems and other features. On 15th October it was subsequently announced that further Israeli SPIKE anti-armour and anti-personnel were being procured, to be used both as the armoured vehicles’ equipment and by infantry units operating alongside the vehicles.

The first of the new vehicle fleet was delivered in 2016, accompanied by a British Army Training Team to deliver tuition on both maintenance and NATO mechanised infantry tactics, and by October 2017 Latvia’s 1st Mechanised Infantry Battalion was able to field their new vehicles in quantity during Exercise SILVER ARROW where they operated in tandem with the Canadian-led NATO multinational eFP (enhanced Forward Presence) battlegroup.

The bulk of the Latvian CVR(T) fleet consists of FV107 Spartan personnel carriers and FV103 reconnaissance vehicles, but the total also includes FV105 Sultan command vehicles, FV104 Samaritan ambulances and FV106 Samson recovery vehicles; the precise breakdown was not revealed. The standard primary armament for the Scimitar is the 30mm RARDEN cannon; secondary weapon is a coaxial 7.62mm FN MAG / GPMG. The Spartans and Sultans are armed with a roof-mounted 7.62mm GPMG.

The Spartan is crewed by three and carries four dismounts [© BM]

On 26th October we were given an exclusive opportunity by the Latvian MoD to photograph the 1st Mechanised Infantry Battalion moving forward during the Advance To Contact during the final phase of SWIFT ARROW 17 and three days later we photographed some of the vehicles again during the dynamic display on the Distinguished Visitors Day at the end of the multinational exercise. (None of the Scimitars we photographed on the exercise had yet been upgraded with SPIKE launchers.)