Evolution of the Schutzenpanzer MARDER 1 ~ Pt2 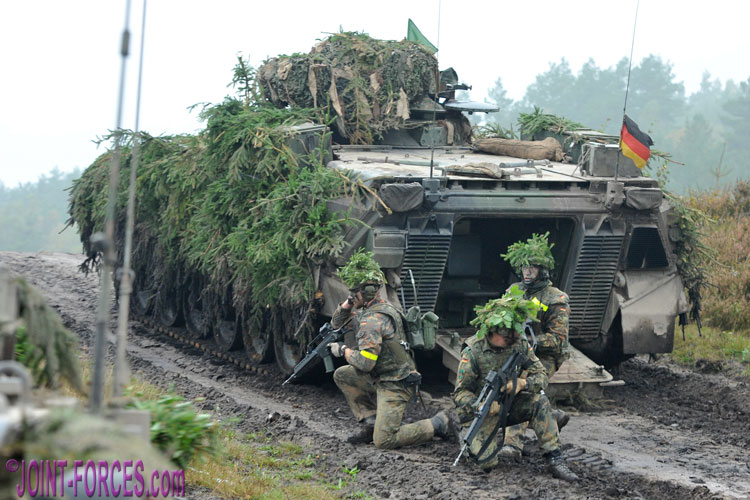 Since its official introduction in 1971, the Schützenpanzer MARDER 1 AIFV (Armoured Infantry Fighting Vehicle) has been the main weapon system of Germany’s Panzer Grenadiers.

Carl Schulze continues, in this second part of his report: Between 1989 and 1998 a total of 2,097 vehicles were upgraded to Schützenpanzer Marder 1 A3 standard, with the main aim of the upgrade being the improvement of armour protection. The vehicles were fitted with spaced steel add-on armour, stronger torsion bars and a new hydraulic dual-circuit brake system. Gear ratios of the final drives were changed to increase mobility and the rear fighting-compartment roof was given a new layout, now featuring only three hatches.

The Schützenpanzer Marder 1 A3 features increased armour protection – by 1998 a total of 2,097 vehicles had been modified to A3 standard [© CS]

Other modifications included a new heating system for the rear fighting compartment, the integration of storage compartments in the rear ramp, installing of storage bins along the vehicle sides, fitting of a larger driver’s hatch and terminating of the firing ports. The coaxial MG was also moved to the left side of the turret.

From 2000 onwards, 68 Schützenpanzer Marder 1 A3 AIFVs were converted into Marder 1 A3/VB-Trp (Vorgeschobener Beobachter Trupp or, observation post vehicles) and issued first to the mortar companies of the Panzer Grenadier battalions and from 2003 to the Forward Observers of the artillery battalions. As part of this conversion, the vehicles were fitted with the Zielortungsgerät TZG 90 mobile target detection system, the militarisierter Rechner, tragbar Model 86 (MRT 86) fire control computer, and the Precise Lightweight GPS Receiver 95 (PLGR 95).

In 1999 Panzer Grenadier assets belonged to the German combat forces that were among the first troops of the NATO-led Kosovo Force (KFOR) to enter the former Yugoslav province. The Kosovo deployment marked the first ever operational deployment of the Schützenpanzer Marder 1 A3.

Schützenpanzer Marder 1 A5
While the Schützenpanzer Marder 1 A3 was not deployed with the German IFOR and SFOR contingents to Bosnia and Herzegovina, the encountered mine threat in the country triggered a certain degree of mine awareness with Germany’s military planners. This resulted in the upgrading of 74 Marder 1 A3s to Marder 1 A5 standard, in order to improve their mine protection, between 2002 and 2005.

Most important modifications were the installation of a mine protection belly plate, reinforcements to the corners of the hull, a false floor and covers over weld seams. The vehicles were also fitted with new armoured side skirts, a spall liner and new fuel tanks featuring explosion protection technology. The frame with the seats was now decoupled from the floor and the seats fitted with safety belts and footrests.

As part of the vehicle’s new storage concept, all equipment previously mounted in brackets on the floor was moved elsewhere to prevent the kit from becoming secondary projectiles in the case of a mine strike. Three storage boxes were mounted on top of the hull.

The running gear of the vehicles was also upgrade in order to allow it to deal with their increased weight. Additionally, the vehicles were fitted with new Type 1028 double-pin tracks manufactured by Diehl Defence Holding GmbH. In October 2009, it was therefore decided to fit ten Schützenpanzer Marder 1 A5s with a Raumkühlanlage air-conditioning system and the Schutzausstattung CG-12 electronic RCIED countermeasure system, under an Urgent Operational Requirement programme.

These vehicles were also fitted with the Mobile Multispektrale Tarnausstattung (MMT) mobile camouflage system, a variant of the Barracuda Mobile Camouflage System (MCS) manufactured by Saab Technologies AB in Sweden. The number of vehicles to be modified later was raised to 35. The first Schützenpanzer Marder 1 A5A1s were fielded in Afghanistan in December 2010 and in the end 25 were deployed in total.

On the 2nd June 2011 one of the vehicles was destroyed by an massive IED some 36km south of Kunduz. In the incident, the driver was killed and five other crew members were badly wounded. From mid-2013 onwards the Schützenpanzer Marder 1 A5A1 variants were redeployed to Germany as part of the drawdown of ISAF.

Footnote: Surplus Marder 1 A3s have so far been sold to Chile, Indonesia and Jordan.

From 2000 onwards, 68 Marder 1 A3 AIFVs were converted into Marder 1 A3/VB-Trp observation post vehicles, one of which can be seen here [© CS]