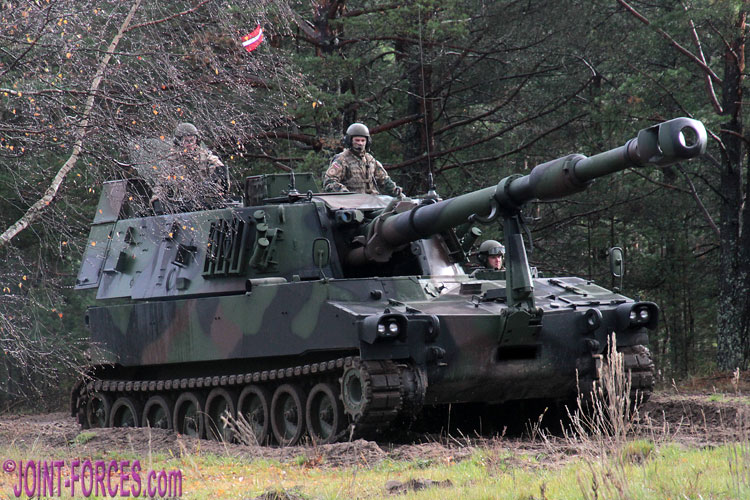 In early October 2017 the Latvian Army, as part of an ongoing modernisation programme, took charge of the first of a batch of M109 155mm self-propelled to boost national and regional defences.

Bob Morrison reports: In February 2017 news broke that the Latvian Ministry of Defence was preparing to sign contracts with the Austrian Defence Ministry to purchase 47 surplus to requirements M109 self-propelled howitzers and support vehicles. The deal between governments was concluded by the end of April and by early October the first vehicles had been delivered to Adazi; see Latvian Public Media video clip below.

By the end of October the first of the howitzers, refurbished by Austria a little over a decade ago and then put into temperature controlled storage as surplus to requirements, were participating on the multinational Exercise SWIFT ARROW ’17 alongside the NATO eFP (Enhanced Forward Presence) battlegroup in Latvia (BG LVA). Originally built to M109A2 standard for Britain’s Royal Artillery, these guns were sold on to Austria following introduction of the AS90 before being upgraded to M109A5 standard; in Austrian service they were then reclassified M109A5Ö (the suffix standing for Österreich, i.e. Austria).

Of the 47 vehicles purchased by Latvia, 35 are self-propelled howitzers, ten are turreted command and control vehicles (Austrian designation Rechenstellenpanzer M109) with main armament removed, and two are driving school vehicles. The accompanying photos were taken on 29th October on the edge of the Adazi training area; note that numbers, which had been changed to a two letter then three number sequence, have been obscured on OpSec (Operational Security) grounds.

In A5 configuration the M109 has the M284 39-calibre 155mm cannon as its primary armament and a roof-mounted 12.7mm heavy machine gun on a pintle mount for close and air defence. Firing range with rocket assisted projectile (RAP) rounds is 30,000 metres and with unassisted projectiles it is 23,500 metres. Crewed by six – Commander, Driver, Gunner, Assistant Gunner, and two Loaders – the rate of fire is four rounds per minute for three minutes or one round per minute sustainable for one hour.