Home > Features > Evolution of the Schutzenpanzer MARDER 1 ~ Part One

Evolution of the Schutzenpanzer MARDER 1 ~ Part One 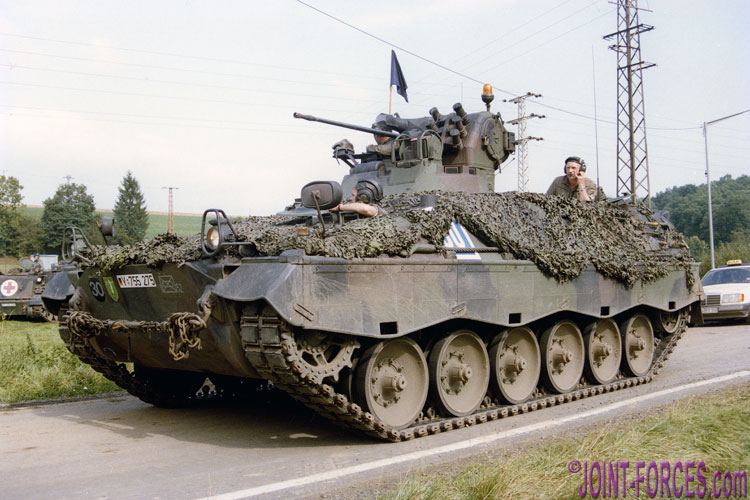 Since its official introduction in 1971, the Schützenpanzer MARDER 1 AIFV (Armoured Infantry Fighting Vehicle) has been the main weapon system of Germany’s Panzer Grenadiers, reports Carl Schulze.

Carl Schulze reports: The Panzergrenadiertruppe is the armoured infantry force of the Bundeswehr. Currently the vehicle is being replaced by the Schützenpanzer PUMA, but the ordered 342 vehicles, of which about 50% have been delivered, will not be enough to equip all eleven armoured infantry battalions of the German Army.

Between 1971 and 1975 a total of 2,136 Schützenpanzer Marder entered service with German Army – the first series production vehicles were issued to Panzer Grenadier Lehr Bataillon 92 [© Bundeswehr]

This shortfall in numbers, together with technical issues with the new vehicle, will certainly see the Schützenpanzer MARDER 1 soldier on for quite a while. In this initial article JF will brief readers on the early history of the Schützenpanzer MARDER 1, which at the time it entered service was the first real armoured infantry fighting vehicle in NATO service, and in the a follow-on feature we will bring you up to date on the AIFV as deployed operationally, first in the Balkans, then in Afghanistan and currently as part of the NATO defensive Baltic shield.

In conventional high-intensity wars, Panzer Grenadiers fight the all-arms battle together with other tanks, combat engineers and artillery etc. Accordingly, Panzer Grenadiers conduct offensive, defensive and delaying operations in which they may fight, in quick succession, mounted or dismounted. These specialist infantrymen fight dismounted wherever high threats against armoured combat forces are encountered; for example in woods and forests, or in urban terrain.

When fighting dismounted, Panzer Grenadiers are supported by their Schützenpanzer. The Panzer Grenadier tactic of fighting mounted and dismounted in quick succession was developed to perfection by German forces during World War Two, and the concept proved itself in many battles. It is therefore not surprising that, when the new German Armed Forces were raised in 1955, the German Army included Panzer Grenadier battalions.

The vehicle’s crew consisted of the driver, gunner, vehicle commander and five dismounts. This vehicle only partly fulfilled the requirements of the Panzergrenadiertruppe, with troops having to dismount over the vehicle’s sides, a technique already considered obsolete in World War Two. It was underpowered, could not follow MBTs in battle, was technically unreliable and lacked any kind of NBC protection system.

Schützenpanzer (Neu)
Requirements for a successor of the HS 30 were already established before the vehicle entered operational service. The so-called Schützenpanzer (Neu) was required to fight alongside the new MBT that was under development and that was later fielded under the designation Leopard 1.

The new vehicle was also required to carry more dismounts than the Schützenpanzer (lang) HS 30, be armed with a 20mm automatic cannon, feature the same level of armour protection as an MBT, be fitted with an NBC protection system, allow change from mounted to dismounted combat in quick succession without danger, and be able to drive underwater. In January 1960 development contracts for the new AIFV were issued and up to 1967 three generations of prototypes were built, with testbed designs differing drastically from each other and often making use of different types of technology.

Over the time the military requirements were also modified several times, due to gained experiences with the prototypes. Last modifications were implemented only during the production of ten pre-production vehicles in 1968. In October 1969, the Bundeswehr placed an order for 1,916 of the new AIFVs with the Rheinstahl AG. The vehicle by now was called Schützenpanzer MARDER (i.e. Marten) and later another 210 additional vehicles would [©ordered. The first series production vehicles were officially handed over on 7th May 1971 and the last in 1975. Two prototypes of Schützenpanzer Marder 2 were built before termination of its development. The vehicle was armed with an Rh 503 35mm/50mm automatic cannon and a coaxial 7.62mm MG3. It weighed 44,200kg and had a crew of ten [© Krauss-Maffei Wegmann GmbH & Co. KG]

Schützenpanzer MARDER 1 A1 and 1 A1A

Over the years, the Schützenpanzer MARDER 1 was modified several times to improve its combat capabilities. Between 1977 and 1979, all vehicles were fitted with a mounting kit for the MILAN anti-tank guided weapon (ATGW) system, allowing the weapon to be fitted to the commander’s cupola of the turret.

To allow for stowage of the missile system and four missiles inside the vehicle, one dismount seat was removed. From then on, the AIFV’s crew consisted of only nine soldiers; driver, vehicle commander, gunner and six dismounts. Between 1979 and 1982, a total of 1,024 vehicles were modified to Schützenpanzer MARDER 1 A1 standard, 674 1 A1(+) and 350 1 A1(-), plus another 1,112 were brought to MARDER 1 A1A standard.

In both cases the vehicles were fitted with a new dual-feed system for the 20mm MK 20 Rh 202 DM 6 Maschinenkanone that allowed the crew to quickly change between high explosive (HE) fragmentation and armour-piercing (AP) ammunition.

Schützenpanzer MARDER 1 A1A2 and 1 A2

Between 1984 and 1991 the next modifications were conducted, aimed at increasing operational readiness, reliability and serviceability. In addition, the machine gun mount situated on the rear fighting compartment roof was removed. Schützenpanzer MARDER 1 A1(+) thus modified were given the designation MARDER 1 A1A2.

In the case of MARDER 1 A1(-) and MARDER 1 A1A, the Wärmebildgerät WBG X thermal-imaging system was additionally installed to improve their night-fighting capabilities. The 1,462 vehicles fitted with the WBG X were given the designation Schützenpanzer MARDER 1 A2.

Some 36 AIFVs were converted into Fahrschulpanzer MARDER 1 A2 driver-training vehicles. As part of the modification their turrets were exchanged for special cabins for the driving instructor, and an override system and ballast ring were incorporated.