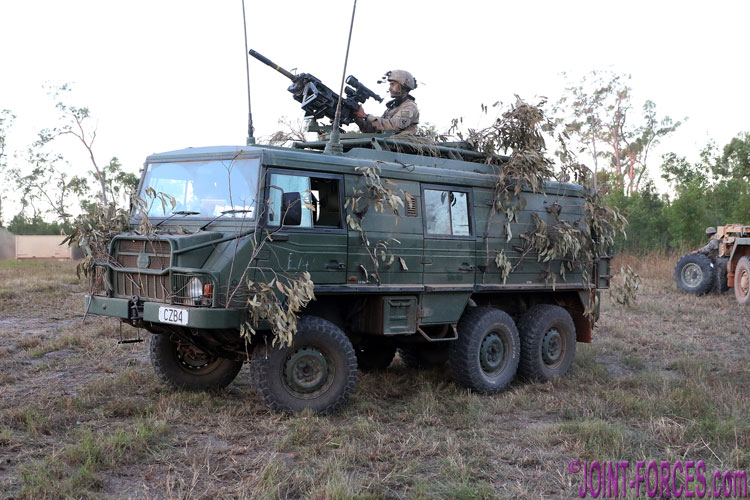 New Zealand participated in Exercise TALISMAN SABER, a large-scale bilateral exercise held every two years in Australia in conjunction with the USA, from 5th to 26th July 2017. This was the seventh iteration of TALISMAN SABER (TS17) and it involved some 34,000 participants representing ground, naval and air forces operating together in a complicated exercise scenario.

Gordon Arthur reports: Compared to the overall scale of the exercise, New Zealand’s contribution to TS17 was relatively modest as it sent just over 700 troops. However, with a mere 9,249 regular troops in the New Zealand Defence Force (NZDF), the case could be made that the country sent a full 7.5% of its strength to Australia! In Australia TG BLACK performed the mission of a cavalry reconnaissance unit, with its own intrinsic combat service support. After the free-play exercise kicked off, the Task Group moved along a southerly axis as a supporting element to the main effort that was taking place farther west. Interestingly, the enemy had wrongly anticipated that the main effort would be in the east, meaning TG BLACK and its Australian and US counterparts met stronger than expected resistance.

Of the 700 Kiwi troops participating in Exercise TALISMAN SABER 17 about 200 were sailors, 50 were airmen and the remainder were from 1[NZ] Brigade of the New Zealand Army [© Gordon Arthur]

These watchful soldiers are right on the forward edge of the battlefield – the Kiwi on the right has a 7.62mm AR-10 Designated Marksman Rifle (DMR) produced by LMT [© Gordon Arthur]

As well as 700 personnel, the NZDF dedicated 24 NZ Light Armoured Vehicles (NZLAV), 41 MAN trucks, 28 Pinzgauer vehicles, one High-Mobility Engineer Excavator (HMEE) and two NH90 helicopters to TS17. All this materiel was transported to, and retrieved from, Australia aboard the multi-purpose ship HMNZS Canterbury. Australian, American and New Zealand army commanders confer over a map as they ponder their first exercise move – Lt Col Hamish Gibbons, commander of TG BLACK, is on the far left [© Gordon Arthur]

JF took up an invitation to visit TG BLACK during the exercise, accompanying Colonel Brett Wellington, commander of 1(NZ) Brigade as he toured the battlefield. The accompanying photos give a taste of the range of equipment fielded by the New Zealand Army at the Shoalwater Bay Training Area (SWBTA) in central Queensland.

The New Zealand Army’s most capable vehicle is the LAV III, otherwise known as the NZLAV – the Queen Alexandra’s Mounted Rifles (QAMR) took 24 of these 8×8 vehicles to Australia [© Gordon Arthur]

Lieutenant Colonel Hamish Gibbons, who commanded TG BLACK, described it as “a fantastic training opportunity” for the Kiwi contingent. Given that the exercise featured three times more troops than the whole NZDF can muster, this was patently true.

The colonel added, “The involvement of so many different capabilities such as attack helicopters and tanks was a fantastic experience for our younger troops, while our senior commanders were able to request those assets to complete our tasks. Being a part of the activity during the centenary of ANZAC demonstrates our bonds are still strong. Australians and New Zealanders can still work closely together.”

An NZLAV of QAMR, the army’s only cavalry squadron, cautiously advances through the SWBTA – efforts have been taken to camouflage the vehicle that weighs 14.8 tonnes when empty [© Gordon Arthur]

Major General Tim Gall, Commander Joint Forces, also commented on the value of the exercise: “In order to continue protecting New Zealand’s interests, our organisation needs to continue to ensure its effectiveness in a warfighting environment. While much of our day-to-day activity focuses on providing assistance and training to our regional neighbours and our main operations across the globe, at the end of the day we are a fighting force. Exercises like TALISMAN SABER give us the opportunity to test our people, our capabilities, our skills and our focus around combat scenarios, while working alongside some of our closest military partners.” The general added, “While ours is a small defence force, we are still relied upon as a trusted regional partner. Our military relationship with our Australian counterparts started more than 100 years ago and the ANZAC spirit is still strong between us. These exercises also allow us to create ongoing working relationships with other participating nations.”