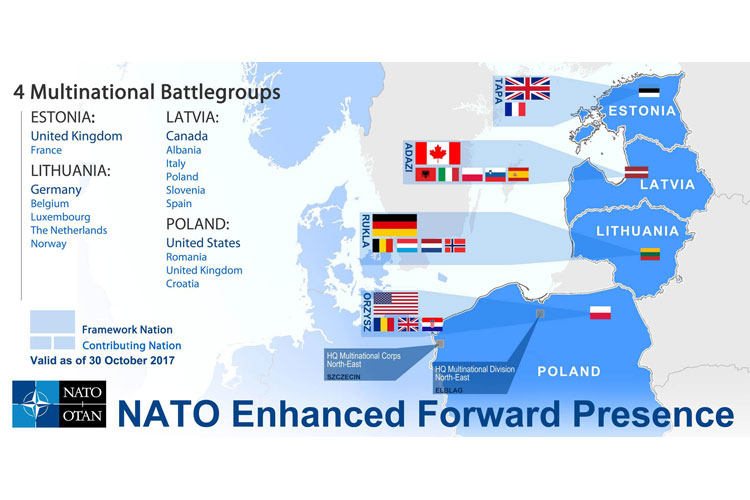 In response to Russian expansionism, specifically the annexation of Crimea in 2014 and the attempts to destabilise Ukraine, the NATO Alliance leadership subsequently agreed to form a multinational defensive shield in Poland and the Baltic Nations.

The 2016 NATO Warsaw Summit, which was attended by Presidents, Prime Ministers and a Chancellor from 30 NATO nations, plus Secretary General Jens Stoltenberg and dignitaries from 17 non-member states from Afghanistan to Ukraine, as well as from the EU, agreed on nine bullet points. At the top of the list was strengthening the Alliance’s military presence in the east, with four battalion-strength multinational battlegroups to be stationed in Estonia, Latvia, Lithuania and Poland on a rotational basis and to be in place by early 2017.

Known as NATO’s enhanced Forward Presence or eFP – the lower case initial word is intentional, to avoid any confusion with similar military acronyms – this arc of four battlegroups along NATO’s eastern Baltic Sea nations is intended to be defensive and deterrent in nature. The combined force is not strong enough to be considered an offensive military formation, but with troops from several nations participating in each battlegroup it is intended to remind an expansionist Russian Bear that an attack on one NATO member would be considered to be an attack on the entire Alliance.

In essence the new eFP structure is a rebirth of the multinational ACE Mobile Force (AMF) concept, which acted as an efficient deterrent on NATO’s vulnerable flanks from 1960, through the fall of the Iron Curtain, until its disbandment in 2002 when it was replaced by the NATO Response Force or NRF. The unofficial motto of AMF(Land) was “Count the flags, not the barrels!” and the new eFP formations work on precisely the same premise; any aggressor would not be taking on a relatively weaker nation, nor a tiny multinational Allied formation on that country’s soil, but the entire Alliance and effectively all their armed forces.

The first eFP battlegroup was activated at Orzysz in Poland, from where it is able to mutually support the German-led multinational Lithuanian eFP battlegroup (BG LTU) and defend the Suwalki Gap. The initial Battle Group Poland (BG POL) roulement was led by the 2nd ‘Cougars’ Squadron of the 2nd US Cavalry Regiment, the ‘Second Dragoons’; an American Cavalry Squadron equipped primarily with STRYKER Interim Armored Vehicles which in size compares with a UK infantry battalion. The US formation’s reconnaissance, surveillance, and target acquisition functions are usually provided from the parent Cavalry Regiment’s fourth Squadron, but for the eFP deployment a squadron from Britain’s Light Dragoons has been placed under US command along with a Romanian Close Air Defence battery; Croatia also joined this battlegroup by the end of the year. .

The United Kingdom is the lead nation for Battle Group Estonia (BG EST) and for the initial deployment 5th Battalion of The Rifles [5 RIFLES] was joined by a French armoured company group with Leclerc Main Battle Tanks. At the end of the year the French were replaced by a Danish contingent for the second roulement.

Canada leads the Latvian battlegroup (BG LVA) in the centre of the Baltic Nations trio, supported initially by Albanian, Italian, Polish, Slovakian and Spanish contingents. As can be seen by the NATO graphic, the three Baltic Nations battalions can be comparatively easily supported by their immediate NATO neighbour and can defend the vulnerable Suwalki Gap between Belarus and the Russian exclave of Kaliningrad which is now guarded by two multinational battlegroups in addition to national assets.

Between late March and late October JOINT FORCES covered all four eFP battlegroups, taking in the first deployment plus three major multinational field training exercises, and it is our intention to produce a series of features on as many of the participating contingents, plus their vehicles and equipment, as possible.