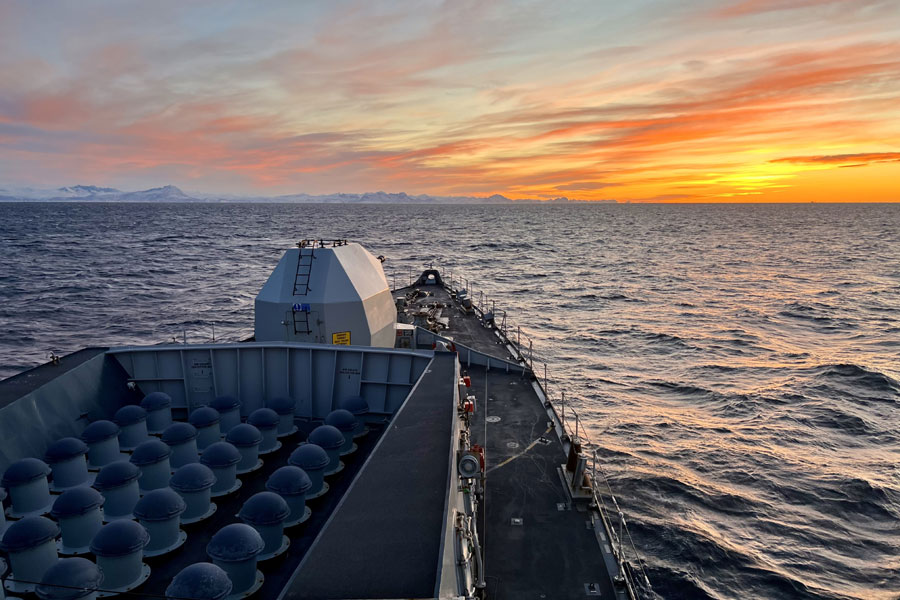 HMS Northumberland off the Norwegian coast at sunrise [Crown Copyright]

Artful has been hosting would-be submarine Commanding Officers undertaking the live-action phase of the legendary Submarine Command Course (aka Perisher), which determines whether someone has the ‘right stuff’ to be in command of a submarine. The exercise provided plenty of ‘targets’ for the Perisher students, as well as plenty of opponents to try to hunt them down – led by HMS Northumberland, designed and built to track the enemy below. The near-sub-zero waters of the Norwegian Sea and Arctic, not to mention the many inlets and fjords, make for particularly challenging conditions for hunter and hunted alike (water temperature is just one important factor affecting the propagation of sound in water).

“Flotex provided a warfare scenario that was complex enough to meet my training aims in an area of ever-changing conditions which confused picture compilation, with fjords which made for demanding dived navigation, all of which combined to challenge my students to their limit,” said Commander ‘Mac’ McAllister, the Perisher course’s lead instructor – known as ‘teacher’. “I am extremely grateful to the Norwegian Navy for allowing us to participate in their exercise, and for the all the ships, aircraft and submarines we worked with.”

Having operated and trained in the High North frequently over the past 12 months HMS Northumberland has grown used to the environment, but relished the chance to test herself against the second youngest hunter-killer submarine in the Royal Navy’s flotilla.

“This training tested the ship’s company and helped to ensure that they remained at the highest standard of war-fighting ahead of future deployments and patrols,” said Underwater Staff Warfare Officer Lieutenant Commander Aaron Goodwin.

The hunt was assisted by the frigate’s Merlin helicopter – like the ship, designed and built to find hostile submarines. “The opportunity to train with and against HMS Artful is a definite highlight of my career,” said Lieutenant Michael Moxom who, as flight observer, leads the Merlin in the hunt. “I and the rest of the team feel much better prepared for future operations because of it.”

Commodore Trond Gimmingsrud, commander of the Norwegian Fleet, said he was delighted both Northumberland and Artful could join his navy’s premier exercise. “We have a long history with close collaboration with the Royal Navy, and its participation in Flotex is valuable to us. It makes them familiar with operating in our waters, and strengthen our abilities to operate together,” he added. “We are able to offer challenging conditions in our waters, and are happy to welcome the Royal Navy to train and use our waters to certify new commanders for their submarine crews.”

Commander Will Edwards-Bannon, Northumberland’s Commanding Officer, said the Flotex was the icing on the cake on the frigate’s time in the High North, with the ship benefiting from Norwegian support and hospitality. “HMS Northumberland has been very fortunate to spend a lot of time training in Norwegian waters and operating with our Sjøforsvaret friends,” he said. “The challenging conditions – both above and below the waves – have been the perfect environment for my crew to hone their skills and assure our ability to defend NATO’s Northern Flank.”