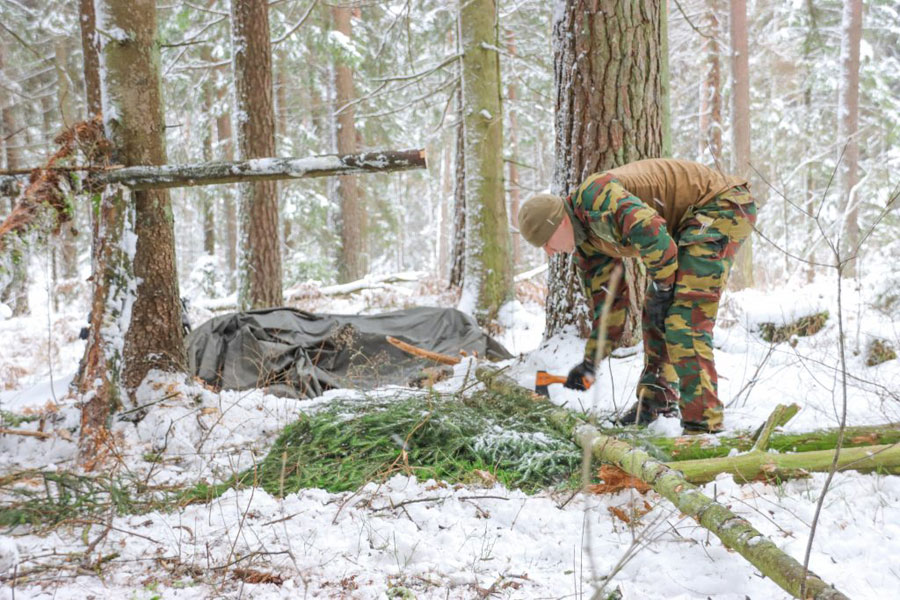 News Release, Brussels, 19 December 2022: [auto-translated] The Belgian detachment in Lithuania has had cold days. On December 8 and 9, the first platoon of the second company of the Chasseurs Ardennais battalion held survival training in the forests of Rukla. It was the turn of the second platoon on December 14 and 15. They honed their survival skills by making a shelter, a fire and their supper: fresh trout.

Since August 2022, the second company of the Bataillon de Chasseurs Ardennais has been part of the enhanced Forward Presence (eFP) Battlegroup in Lithuania. Together with five other countries (Germany, the Netherlands, Norway, the Czech Republic and Luxembourg), they form the NATO contingent deployed on Lithuanian territory to discourage the Russian neighbour from attacking NATO territory.

During the five months that the Belgians have stayed in Lithuania, they have participated in various exercises, ranging from platoon level to Battlegroup level. The last major battlegroup exercise was the live fire exercise RESOLUTE STALLION. Now that this exercise is over and temperatures have remained below freezing since mid-November, it was time for some survival training.

The teacher on duty was 1e soldaat [translates as 1st soldier equating to lance corporal] Nicolas. In 2019, he followed a four-week course at the SERE (Survival, Evasion, Resistance & Extraction) cell in Marche-les-Dames and can now call himself a SERE instructor. “It was a very demanding course,” says 1st soldier Nicolas. “The physical side is tough, but the mental aspect is often underestimated. Living several days in isolation with no food or drinkable water nearby is challenging. You really need to take care of yourself knowing that they are looking for you. You never have a moment of mental peace.”

Fortunately, survival training in Lithuania was not that demanding. This two-day initiation started with a demonstration of the different shelters that can be built. This ranges from a very primitive shelter to a fully developed shelter using only materials found in nature, such as fallen trees to make the construction and pine branches to cover the construction.

After a while everyone is dry. Since the temperature still does not rise above freezing, some warmth is also welcome to get through the night. To light the fire, matches or lighters are not allowed. By means of a flint, the Ardennes Hunters try to make sparks and transfer them to wood chips that they have peeled just before. Given the humidity, it is difficult to light the fire the first time, but eventually everyone succeeds.

The last technique that the soldiers of the platoon are taught is how to prepare a trout. Instructor Nicolas shows you how to kill and cut the trout in a painless and careful way. “It is a matter of survival, but respect for nature remains very important. We only take what we need and our footprint is as low as possible”, says 1st soldier Nicolas. Then the trout is heated over the previously created fire. Everyone can enjoy their protein-rich supper and head out into the cold and snowy night.