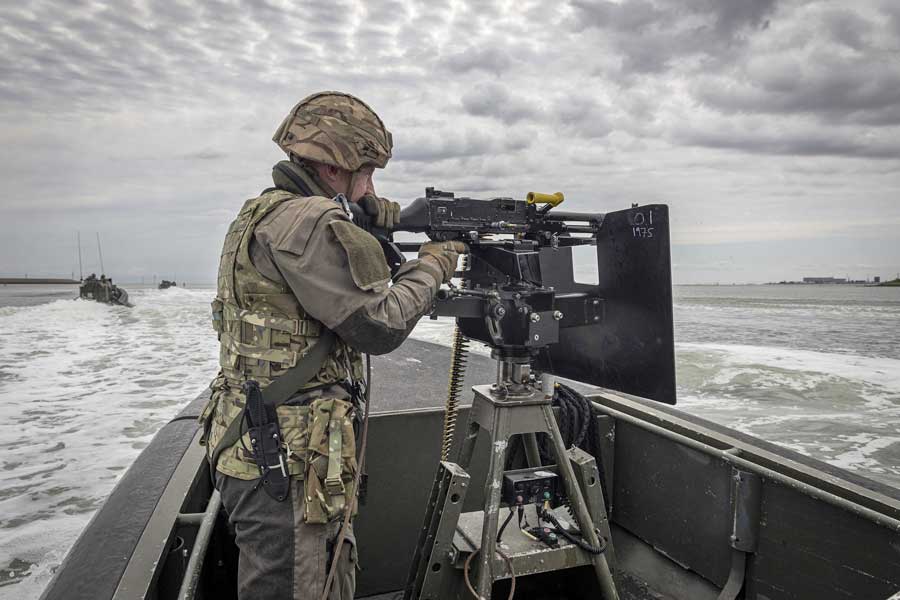 RN News Release, Whitehall, 21 July 2022: Royal Marines have completed preparations for operations across the Mediterranean this autumn after intensive amphibious exercises in the Netherlands.

After three months of intensive work-up in the UK, marines from Plymouth-based 47 Commando headed to the Dutch island of Texel – scene of some of the final fighting in World War 2 – for the culmination of tough operational training. Around 90 commandos crossed the North Sea with Royal Navy support ship RFA Mounts Bay for training that has been developed over generations, building on a rich history of amphibious warfare.

“They’ve got a huge amount to think about,” said Captain Alec Trigger, landing craft training officer at 47 Commando. “It’s inherently quite dangerous on the water, so they’re thinking about that aspect but then they’re also thinking about the tactical exercise and the enemy scenario and then supporting the landing forces as best they can.

“The kind of areas that we’ll be landing strike teams are going to be contested. You need a craft operator that can fulfil every role. They are a commando first and a coxswain second. You don’t leave those commando skills behind when you become a landing craftsman.”

The ability to strike at enemy coastlines is fundamental to the Royal Marines and is why a deep knowledge and history of operating is carefully maintained and developed by raiding experts at 47 Commando. Under the cover of darkness, on daring silent raids, under heavy fire, up craggy cliffs, complex fjords and across undulated beaches, those at the helm of landing and raiding craft have the daring and complicated task of getting fellow commandos ashore no matter the extreme.

Training to qualify as a coxswain of such craft demands dedication and resolve: 42 weeks of training and assessment across three separate 14-week courses to reach the most advanced level. Most of the training is done around the waters near 47 Commando’s home in Plymouth, honing navigational skills, tactics and the handling of craft of all shapes and sizes – from the tiny Inshore Raiding Craft (IRC) and fast and armed Offshore Raiding Craft (ORC) to the larger Landing Craft Vehicle Personnel (LCVP) and Landing Craft Utility (LCU). The course builds up to a final exercise – billed as ‘a driving test with a difference’ – which puts each student in unfamiliar surroundings with a testing mission to land commandos ashore.

This year, the coxswains embarked in RFA Mounts Bay and sailed for Den Helder in the Netherlands to complete their final intensive exercise to become qualified, on what was aptly named Exercise GREEN TULIP. Across five days, the commandos operated around the North Holland port of Den Helder and picturesque Texel Island, a 17 square-mile national park in the north, which is made up of narrow waterways, sand dunes and woodland.

For the coxswains, the waters and beaches of Texel provide a solid challenge in unfamiliar surroundings – the perfect place to put the skills learnt over the last 90-plus days to the test. Corporal Frank Worth said: “We’re going out to make sure they’ve learnt everything on the course they’ve just attended, make sure they’ve understood orders, make sure they understand how to operate all the different craft, following the process of dropping off troops and understanding the whole amphibious side of things.

“We follow the checklist and make sure they’re covering all the different points on the courses.”

This was also a perfect opportunity to work closely with Mounts Bay, with coxswains perfecting docking their landing craft day and night, craning and launching from the ship – skills that take great team work between sailors and commandos to conduct quickly and safely. It was ideal preparation for operational deployments later this year as part of the Royal Navy’s Littoral Response Group (North), which focuses on the security and prosperity of European waters and is usually made up of amphibious flagship HMS Albion, a Bay-class (Mounts Bay or one of her sisters) and an escort frigate.

Intense planning was completed before carrying out landings across Texel, with strike teams from 40 Commando’s Bravo Company heading ashore and taking out ‘enemy’ positions and carrying out reconnaissance missions.