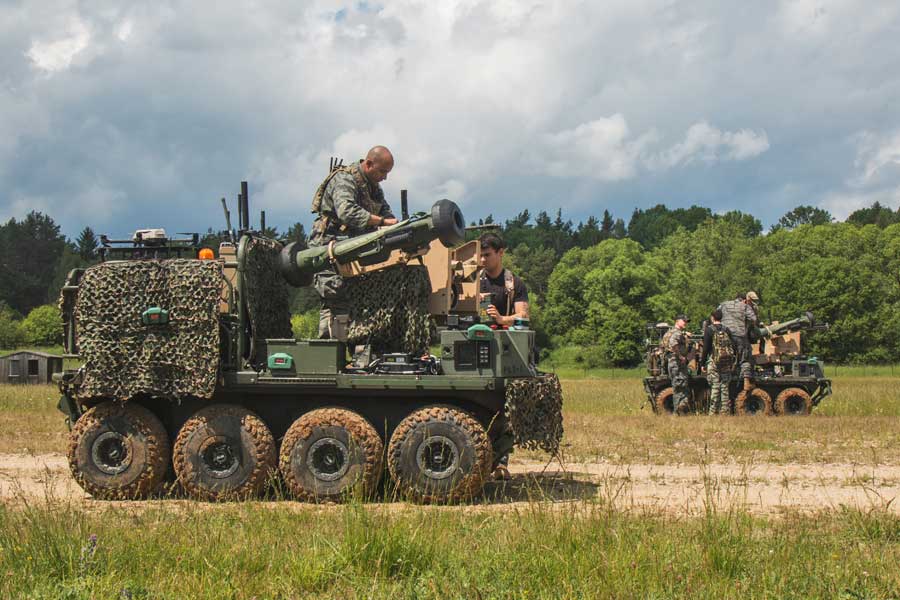 Two of the US Army Project Origin robotic combat vehicles (RCV) based on the GDLS MUTT deployed on Exercise COMBINED RESOLVE 17 in Germany.

News Release, Grafenwöhr, 10 June 2022: COMBINED RESOLVE XVII put an Army brigade and multinational units to the test on more than just their combat readiness and interoperability – the exercise brought future capabilities into the current fight.

COMBINED RESOLVE is a US Army exercise consisting of 5,600 service members, Allies and partners from more than 10 countries, and is designed to assess units’ abilities to conduct combat operations effectively in a multi-domain battlespace. The 1st Battalion, 4th Infantry Regiment, the opposing forces – or adversaries – of CbR, pitted the latest technology – robotic combat vehicles (RCVs) – against the 1st Armored Brigade Combat Team, 3rd Infantry Division and their partner nations in simulated combat.

The RCVs are part of Project Origin, an initiative in development as part of the Army’s modernisation efforts from the Ground Vehicle Systems Center (GVSC) under the Army Combat Capabilities Development Command. The programme tests and experiments with autonomous ground vehicles to support Army manoeuvres and provide a variety of load packages, depending on the situation.

This training provided Project Origin engineers with real-time feedback on the capability, utility, and combat effectiveness of the latest generation of RCVs. The vehicles are remote or autonomously controlled and designed to assist with a wide range of operations including long-range reconnaissance, concealment, electronic warfare, and autonomous resupply operations.

“Any time we can get technology in [Soldiers’] hands and find out, right away, what they like, what they don’t like, helps us to not expend resources in the wrong areas,” said Todd Willert, an engineer with GVSC. “Being out here with the [Soldiers] is the most productive thing for the Army’s Robotic Combat Vehicle Program.”

Soldiers with the 1-4 IN have been working with Project Origin since the beginning of COMBINED RESOLVE XVII, however the current iteration of RCVs they are training with have already been through two weeks of hands-on experimentation with the 1st Special Forces Group at Dugway Proving Ground, Utah.

“This is something I didn’t think we would be seeing in the [Infantry] as soon as we are,” said Sgt. Andrew Carmichael, Sniper section leader with 1st Battalion, 4th Infantry Regiment. “It’s definitely here to stay, so the quicker we can expose our allies and our own forces to this technology and how to implement and defend against it, is crucial in the next fight.”

Soldier feedback within multinational exercises inform Army Modernisation on requirements operating in the coalition environment, promoting interoperability and communicates strength of a combined US, Allied and partner force to shape the security environment. At the conclusion of COMBINED RESOLVE the RCVs will be taken to Grafenwöhr Training Area in order further test their capabilities and conduct live fire training.

¤ Extended image caption: US Soldiers assigned to 1st Battalion, 4th Infantry Regiment are given instruction on the use of the Project Origin robotic combat vehicle in the Hohenfels Training Area, Germany, June 6, 2022. Project Origin uses autonomous ground vehicles to support Army manoeuvres by providing a variety of load packages, depending on the situation, and its use is being demonstrated during exercise COMBINED RESOLVE XVII as part of the Army’s modernisation and emerging technologies initiatives. COMBINED RESOLVE is a US Army exercise consisting of 5,600 service members, Allies and partners from more than 10 countries, and is designed to assess units’ abilities to conduct combat operations effectively in a multi-domain battlespace.

Editor’s Footnote: My apologies for the late running of this interesting news story about the first overseas deployment of a Project Origin RCV, which escaped my notice at time of release as I was at the start of my two-leg journey between KASOTC in Amman and Eurosatory in Paris. For reference, this particular Project Origin robotic vehicles is based on the GDLS 8×8 MUTT.