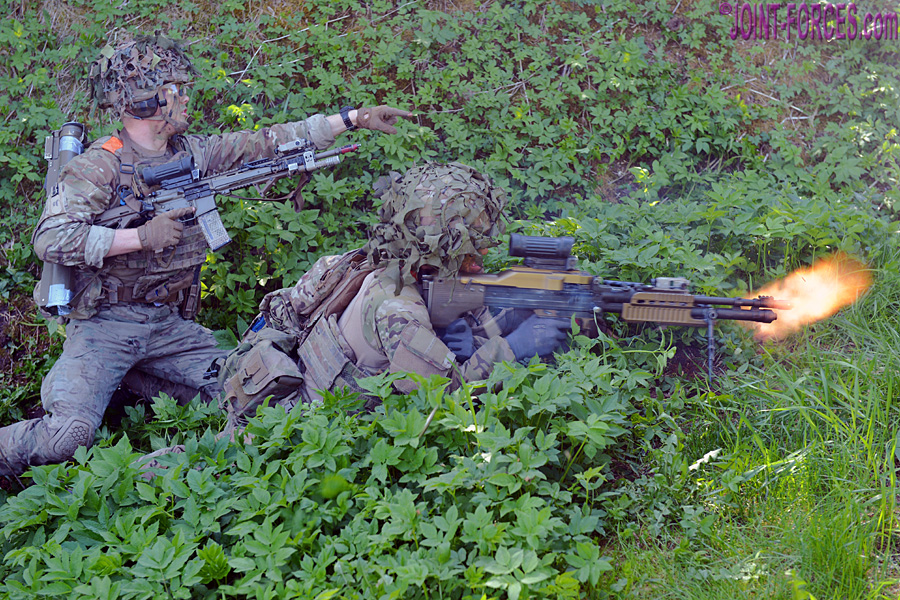 The free play field training phase of Exercise SIIL 2022 started on 23 May, when the Orange Forces of NATO eFP BG EST went on the offensive, reports Carl Schulze.

The free play Field Training Phase of Exercise SIIL (HEDGEHOG) 2022 started on the 23rd May 2022, since when the Orange Forces have been on the offensive. Their aim has been to advance as quickly as possible to secure strategically important bridges and other objectives in Southern Estonia. However, their advance has been stopped again and again by the troops of the Estonian 2. Jalaväebrigaad, a light infantry brigade, which has fought a skilful delaying battle.

Orange advanced with three battlegroups side-by-side, which were led by the Estonian 1. Jalaväebrigaad (infantry brigade). Each of the battlegroups advanced on its own axis in a westerly direction.

The northern axis saw the Estonian Scoutspataljon, equipped with CV9035EE armoured infantry fighting vehicles, advancing over Sangaste and Puka in the direction of Pikasilla. On the centre axis the Viru Jalaväepataljon, equipped with XA-188 Patria Pasi wheeled armoured personnel carriers, advanced. Pushing also through Sangaste this unit then moved in the direction of Keeni and Soontaga. On the southern axis the NATO enhanced Forward Presence Battle Group Estonia (eFP BG EST) pushed forward, from around Ansla it advanced via Tangula, Laatre and Tsirgullina in the direction of Sooru.

Taking Sooru: Wednesday 25 May 2022, Sooru. In the morning the Danish mechanised infantry of Viking Company had taken the E264 highway bridge over the river Väike Emajögi. Fierce fighting between the Danes and Estonian infantry of the 23. Jalaväepataljon, a Reserve light infantry battalion of the 2. Jalaväebrigaad raged for quite a while and only when reinforcement in form of armoured infantry from 1 R WELSH arrived could the bridge finally be secured. With the first objective of the day taken, the eFP battlegroup could now could launch the next advance, aimed at securing another bridge just at the entrance of Sooru, and Soruu itself.

This time the advance was led by B (Rorke’s Drift) Company 1 R WELSH. Attacking through swampy ground, the British armoured infantry quickly managed to gain a foothold in an abandoned factory building in the vicinity of the bridge but initially was unable to exploit its gains. Heavy fire from well dug in Estonian infantry forced the British troops to withdraw. Reinforced by a tank platoon from Ajax Squadron of the Royal Tank Regiment (RTR) the British armoured infantry made a second attempt. This time well-coordinated fire and manoeuvre tactics succeed and after fierce fighting the Estonian troops had to withdraw.

With the bridge under British control a Trojan armoured engineer vehicle was brought forward to clear an obstacle in the vicinity of the bridge that blocked the road leading into Sooru. The way was now free for eFP BG EST to push into Sooru and clear the village itself.