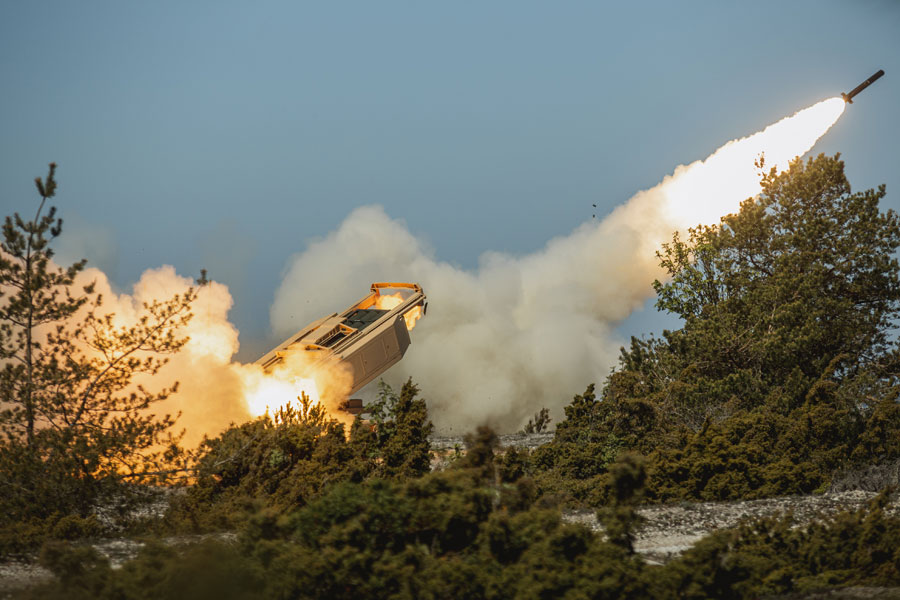 Press Release, Tallinn, 24 May 2022: The M270 multiple launch rocket system (MLRS) was fired by 19th Battery of the 26th Royal Artillery Regiment of the British Army. The exercise was carried out at the Estonian Defence Force’s Central Training Area (Keskpolügoon) in Harjumaa, Estonia. The two rocket systems fired together short-range trainer rockets, all of which struck their intended targets.

“The MLRS is the only precision fire system in the British Army. It can fire 12 missiles in less than a minute, up to 84 kilometres,” said Lieutenant Lauren Bailey, the unit’s safety officer.

Meanwhile, US allies fired M142 HIMARS multiple launch rocket systems on naval targets north of the Undva peninsula in Saaremaa. Undva was also the location for target practice by US A-10 subsonic attack aircraft. The entire operation took place under the supervision of Estonian command and coordination elements.

“After receiving a call for fire support, we determined the targets in cooperation with the Estonian unit. Then, we transmitted this information digitally to the battalion under my command and executed the mission flawlessly,” described Colonel Chris McKee, commander of the 169th Field Artillery Brigade, in Saaremaa.

The live-fire exercises were part of the joint NATO exercise DEFENDER-Europe 22 and the Estonian Defence Force exercise SIIL 2022.

“I have always been impressed by the proficiency of the Estonian Defence Force and the Defence League. They are highly competent soldiers. We’re always happy to come here and train with them. It’s a win-win for both sides,” said Brigadier General Jori Robinson, Commander of the 175th Wing of the Maryland Air National Guard.

The long-range multiple launch rocket system has the capability to attack high-value targets at long range. Multiple launch rocket systems use a ‘shoot-and-scoot’ tactic to avoid enemy counter-fire. The weapon systems employ long-range precision munition that is capable at firing at ranges beyond 300km. The main tasks of the multiple launchers on the battlefield are to suppress and destroy high-value enemy targets. Their role is to eliminate potential threats before they are able to cause damage.