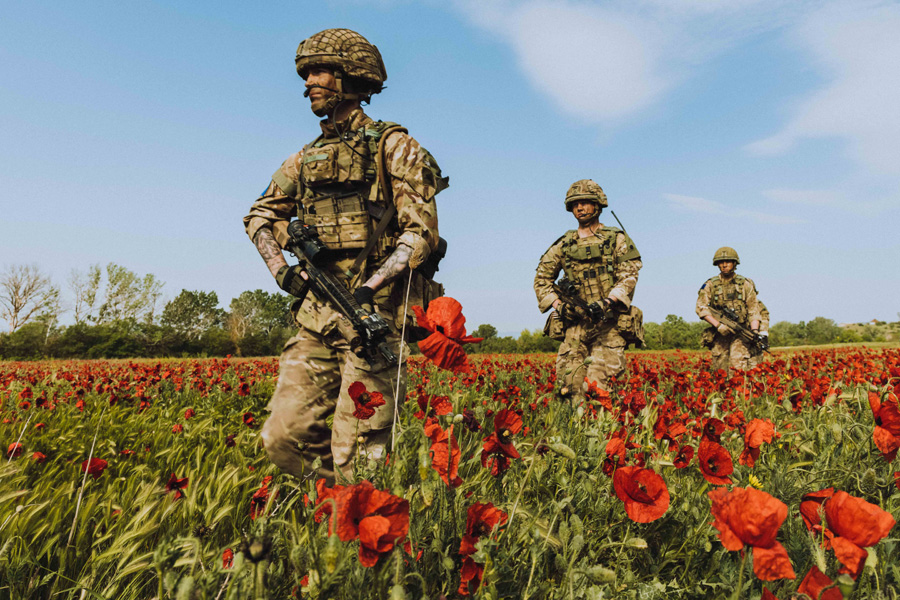 Soldiers from 2nd Battalion of the Parachute Regiment during the live fire phase of Exercise SWIFT RESPONSE, 08 May 2022 [Crown Copyright: Cpl Alexander Morris]

SWIFT RESPONSE 2022 ~ more than 2,000 members of the British Army’s Global Response Force are on manoeuvres in North Macedonia.

Press Release, Whitehall, 13 May 2022: More than 2,000 members of the British Army’s Global Response Force have demonstrated their ability to react to global crises during an exercise with NATO allies.

Some 3,000 personnel from eight NATO countries are training together in North Macedonia on Exercise SWIFT RESPONSE, under the command of 16 Air Assault Brigade Combat Team (BCT). The UK contingent is made up of the 2 PARA Battlegroup, built around the airborne infantry of 2nd Battalion The Parachute Regiment. They have been supported by artillery, engineers, logisticians, medics, and signallers from 16 Air Assault BCT; and Aviation Task Force 1 with Apache attack helicopters and Chinook support helicopters.

Minister for the Armed Forces, James Heappey MP said: “Exercise SWIFT RESPONSE shows how the British Army is transforming to become more lethal, agile, and expeditionary. Exercises alongside our partners and Allies are necessary to maintain our advantage in a complex and ever-changing world.
“I remain proud of our Armed Forces who continue to serve their country on postings around the world, providing leadership in uncertain times.”

Travelling by road, rail, sea and air to North Macedonia – NATO’s newest member since joining in 2020 – troops carried out joint training to build their capabilities and relationships. The soldiers then deployed onto the rugged Krivolak training range by parachute and helicopter to secure and defend a foothold in simulated hostile territory, and then take the offensive.

Brigadier Nick Cowley, Commander of 16 Air Assault BCT, said: “On Exercise SWIFT RESPONSE, 16 Air Assault Brigade Combat Team, alongside multiple Army and RAF units, has truly demonstrated the lethality, agility and expeditionary capabilities of the Global Response Force. We have deployed thousands of miles across Europe to link up with our NATO allies to conduct arduous training in a challenging environment to make sure that we are ready to deploy on the most demanding missions, at short notice.

“I have been hugely impressed by the quality of our soldiers and their ability to integrate with NATO allies. This exercise has absolutely showed me that we are ready for anything.”

The manoeuvres in North Macedonia are one element of Exercise SWIFT RESPONSE, which will see multinational forces under the direction of US Army Europe and Africa conducting simultaneous training across Europe – from the High North to the Balkans – to practice how airborne units can rapidly project force in response to developing crises.