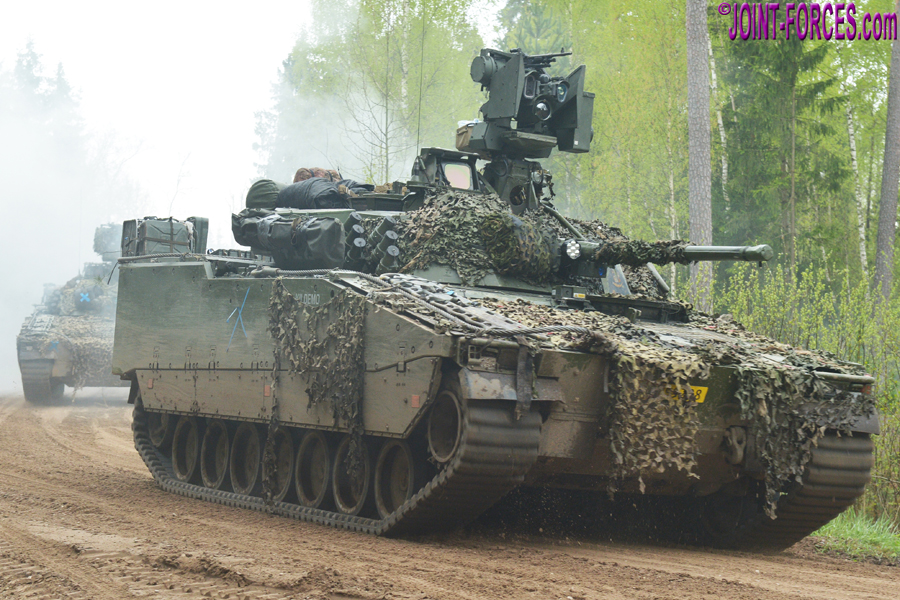 Through the 2017 implementation of the enhanced Forward Presence Battle Groups (eFP BG) in Estonia, Latvia, Lithuania and Poland, NATO sent a clear signal of its determination and ability to defend the territory of its member states. During the biannually held, in spring and winter, IRON WOLF series of exercises the enhanced Forward Presence Battle Group Lithuania (eFP BG LTU) rotations prove their capabilities, while operating in close cooperation with the Lithuanian Armed Forces, the neighbouring eFP battlegroups in Latvia and Estonia, and the Baltic Air Policy mission. Exercise IRON WOLF 2022-I was additionally linked with the US Army Europe and Africa (USAREURAF) Exercise SWIFT RESPONSE 2022.

Conducted between the 5th and 18th of May, on and around the Gaižiūnai Training Area some 30 km east of Kaunas, Exercise IRON WOLF 2022-I saw the participation of 3,339 troops and personnel from 10 nations. The providing nations were Belgium, Czech Republic, Germany, Iceland, Lithuania, Luxembourg, Netherlands, Norway, United Kingdom and Unites States of America. The troops fielded 591 wheeled and tracked vehicles, as well as four helicopters.

The exercise was planned and coordinated by the Mechanizuotoji Pėstininkų Brigada ‘Geležinis Vilkas’, better known as the Iron Wolf Brigade. This formation is the only mechanised brigade of the Lithuanian Ground Forces and the multinational German-led eFP BG LTU is assigned to it.

Linked to Exercise SWIFT RESPONSE 2022: During Exercise IRON WOLF 2022-I the participating forces had to conduct a series of demanding defensive and offensive operations.

For example, as part of the scenario the eFP BG LTU Rotation 11 had to push through an enemy line of defence in order to link up with German paratroopers and Dutch airmobile infantry that had seized an airfield to relieve them in place. This airborne operation was part of the multinational US Army Europe and Africa (USAREURAF) Exercise SWIFT RESPONSE 2022, which saw a first wave of troops being dropped in by parachute from an A400M transport aircraft, and follow-on forces being deployed by another A400M using Tactical Air Landing Operation (TALO) procedures.

As the final operation the eFP BG LTU Rotation 11 had to launch a counter-attack, part of which was against well dug in positions, situated at the Northern end of Gaižiūnai Training Area that had to be cleared and seized. These positions were defended by Lithuanian mechanised infantry, supported by a British armoured infantry company of the 1st Battalion, The Royal Welsh (drawn from eFP BG Estonia) and a British light infantry company of the 4th Battalion, The Mercian Regiment, as well as an American mechanised infantry company of the 81st Stryker Brigade Combat Team of the Washington National Guard (drawn from eFP BG Poland) . The operation saw the three combat companies of the eFP BG LTU operating closely, with the Norwegian armoured infantry and Dutch mechanised infantry attacking side-by-side, and the German armoured infantry functioning as reserve. On the afternoon of 16th May the counter-attacking formations conducted a passage of lines and continued the attack, exploiting the gains made by the Norwegian and Dutch troops.

The brigade is led by by Oberstleutnant Daniel Andrä and his integrated multinational staff, supported by the headquarters and support company of Panzergrenadierbataillon 411. Combat power for Rotation 11 is provided by a German and a Norwegian armoured infantry company and a Dutch mechanised infantry company. The German company belongs to Panzergrenadierbataillon 411 and is equipped with Schützenpanzer Marder 1A3 and 1A5 armoured infantry fighting vehicles. It is augmented by a tank platoon from Panzerbataillon 203, equipped with Leopard 2A6MA2 main battle tanks.