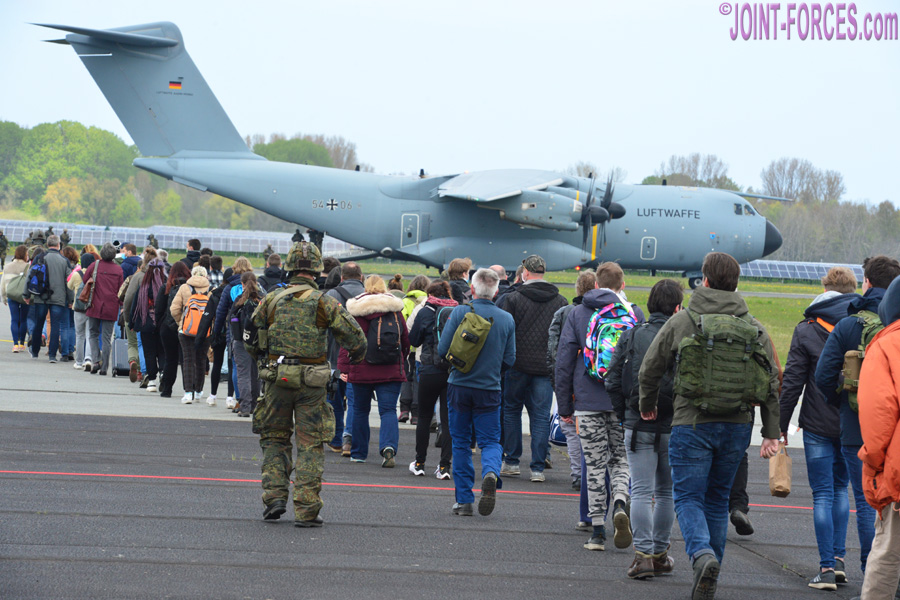 05 May, Barth, SLE (Schnelle Luftevakuierung): Evacuees are escorted to a waiting A400M transport aircraft of the German Luftwaffe [© Carl Schulze]

Between 2nd and 9th May 2022 the Division Schnelle Kräfte (DSK – Rapid Forces Division) of the German Army trained for the evacuation of non-combatants from the fictitious crisis-ridden country of Fromonia. Exercise SCHNELLER ADLER (RAPID EAGLE) 22 was conducted in North-east Germany, mostly in the province of Mecklenburg-Western Pomerania and saw the participation of some 2,000 Dutch and German troops from army, navy and air force formations.

“Non-Combatant Evacuation Operations are extremely complex and require the successful cooperation between different branches of the military,” explained Brigadegeneral Dirk Faust, the General Officer Commanding (GOC) the DSK and Officer Conducting the Exercise (OCE) adding: “Each one is different and in addition to being of a joint nature, nowadays they almost certainly will also be a combined affair, involving forces of two or more different nations.”

The core of the Task Force Land was provided by Fallschirmjägerregiment 31 (an airborne infantry regiment) reinforced by elements of other units of Luftlandebrigade 1 and elements of the Dutch 11 Luchtmobiele Brigade (an air assault brigade). Rotary wing aviation support was provided by aviation assets of the DSK, in the form of NH90 transport helicopters and Tiger attack helicopters. The Task Force Land was led by the regiment’s commanding officer, Oberst Eiko Zuckschwerdt. It operated out of a Forward Operating Base (FOB) situated at Peenemünde airport on the island of Usedom. In the exercise scenario this island formed part of a friendly country situated in the vicinity of Fromonia.

Task Force Sea was centred around the Seebataillon (a naval infantry battalion) of the German Navy commanded by Fregattenkapitän Norman Bronsch. It was reinforced by elements of the 2nd Marine Combat Group of the Dutch Korps Mariniers and German naval aviation assets of the Marinefliegerkommando (naval aviation command), including Sea Lynx Mk88A and Sea King Mk41 utility helicopters. Task Force Sea operated from aboard the Dutch Landing Platform Dock (LPD) HNLMS Rotterdam that deployed from Kiel in northern Germany to the shores of Fromonia.

Krisenunterstützungsteams or KUT (Crisis Support Teams) consisting of German soldiers, members of the Bundespolizei (Federal Police) and members of the Auswärtiges Amt (Federal Foreign Office) also took part in the exercise, running collection points for the evacuees in Fromonia. Exercise control was provided by the headquarters of the Division Schnelle Kräfte (DSK). The evacuees were played by German and Dutch civilians contracted by the military for the duration of the exercise and consisting of people of different sexes, ethnicities and ages.

Different Types of Operations: With the alert and deployment process being completed, the elements of the CJTF had to conduct several different missions, while the situation in Fromonia further deteriorated over the period of the exercise, and hostilities against German and Dutch civilians got worse.

On 5th May 2022 the first mission was conducted by the Task Force Land of the CJTF and saw it conducting a Schnelle Luftevakuierung or SLE (Rapid Evacuation By Air) at Barth airport. Four A400M sorties saw an extraction force of 80 German and Dutch troops deployed and extracted, as well as 200 evacuees extracted to Peenemünde airport. During the mission the extraction force encountered little resistance and mainly had to provide security for the airport and deal with a small group of protesters. Prior to the deployment, a KUT crisis support team, already deployed in advance to Formonia, had in-processed the evacuees at a collection point in the nearby village of Trinwillershagen, before they were shuttled by bus to the airport and there handed over to the military. As part of the in-processing the evacuees were registered, their passports and documents checked, and they underwent screening for weapons and explosives. They also were given food and water, while medical care was given to those in need.

The next day, 6th May, the Task Force Sea conducted its first mission in form of a Schnelle See Evakuierung or (Evacuation By Sea). In this case the collection point was situated at the Mukran ferry port on Rügen island, from which the extraction of the evacuees to the HNLMS Rotterdam was also conducted. The insertion of the extraction force consisting of Dutch Marines and German soldiers and its extraction, as well as that of the evacuees ,was conducted with Boomeranger boats. Processing of the evacuees was conducted on site, again by a KUT. During this mission the forces had to deal with a couple of incidents, one being a large quantity of additional evacuees that were not expected and another in the form of a group of protesters that tried to enter the port area. In contrast to the day before things were also a little bit more tense, for example the 200 evacuees being more anxious about being extracted.

On 7th May another Schnelle See Evakuierung was conducted through the port of Sassnitz. While being conducted in similar style to that at Mukran ferry port, this time the extraction force was deployed simultaneously by Sea King Mk41 utility helicopters and NH90 transport helicopters, as well as Boomeranger boats. As part of the mission an CBRN reconnaissance team was employed, to ensure that in the harbour area no threat was posed by Toxic Industrial Materials and Chemicals (TIM / TIC). The extraction of the evacuees took place by boat and helicopter.

The 8th May saw the Task Force Land conducting a Robust Evacuation in the vicinity of Putgarten, situated at the northern point of Rügen. The aim of this mission was to extract the foreign employees of a radio station that were trapped in a remote transmitter facility. In the area of the transmitter irregular forces were operating, making it impossible for the foreigners to leave. As part of this task a security force jumped in by parachute, forming an outer security ring. With this established the main body of the extraction forces was deployed by six NH90 transport helicopters. The newly arrived troops reinforced the outer ring, established a inner security perimeter around the radio station, and conducted the in-processing of the evacuees. These were then extracted by a Sea Lynx Mk88A and a Sea King Mk41 utility helicopter.

In a final mission, on 9th May, the Task Force Land had to evacuate the German ambassador prior to the end of the exercise. This became necessary after the situation in Fromonia deteriorated even further. This operation was conducted by the Quick Reaction Force (QRF) of the Task Force Land at Neubrandenburg, and was executed by utilising of NH90 transport helicopters; within minutes the ambassador and his staff were extracted by Dutch and German troops, concluding SCHNELLER ADLER 22.