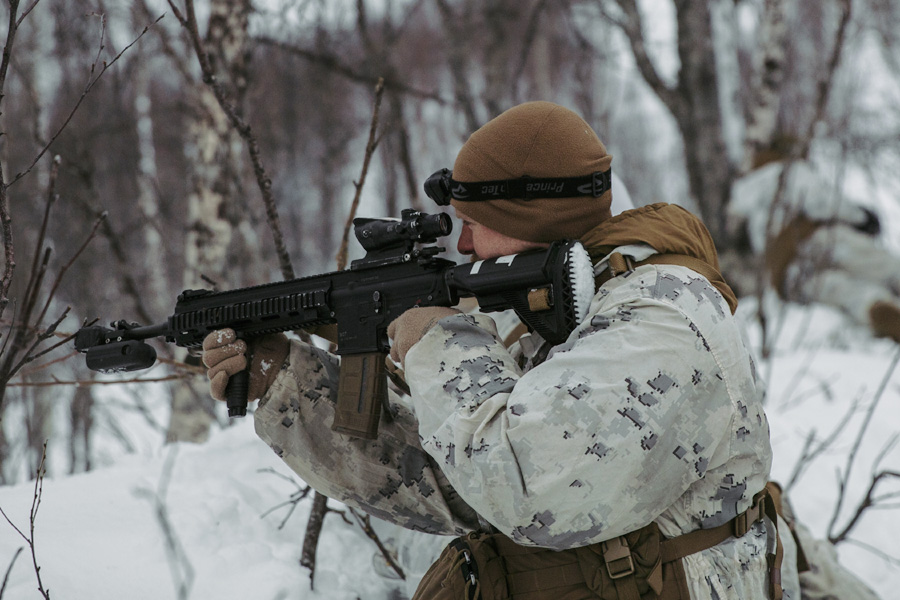 Alongside other nations in addition to Norway, II MEF validated multiple capabilities in the Arctic to include amphibious landings shoulder-to-shoulder with the Royal Netherlands Marine Corps, Naval vessel embarkation and boat patrols with Italian Marines and sailors, as well as tactical combat casualty care and various live-fire events alongside the United Kingdom’s Royal Marines. II MEF Marines also practised integrated troop transportation, trauma care and flight operations with the German Naval Infantry and United Kingdom’s Royal Navy as well as hosted demonstrations with numerous participating nations to include France.

“It’s all about interoperability in a very challenging environment,” stated Deputy Commander of Royal Netherlands Navy Maritime Forces Col. Michiel Posthumus, “We train together here to become stronger because we are all partners anyhow. It can benefit NATO in the future because we are enhancing our interoperability and our readiness, so training together makes us a better team and therefore a more effective force.”

“II MEF readiness has been enhanced through [Exercise] COLD RESPONSE by bringing together elements of the [Marine Air-Ground Task Force],” said Lt. Col. Ryan Gordinier, commanding officer of 3rd Battalion, 6th Marine Regiment, 2d Marine Division, explaining the core strength the MAGTF consisting of a command element, ground combat element, logistics combat element and an aviation combat element. “In the high north, here in Norway, COLD RESPONSE has given us the opportunity to bring those elements together… building interoperability with our Allies in NATO, and some of our other partners.”

US Marines will continue to train overseas during Exercise NORTHERN VIKING and will return to Norway throughout the year. Roughly 400 Marines and sailors will remain in Europe to bolster NATO’s Eastern flank. The United States and Norway share a very close military relationship with a significant amount of Norwegians service members travelling to the United States each year for training and educational exchange programs under the longest-running military exchange partnership between any two nations. Exercise COLD RESPONSE 22 is part of a regularly occurring, biennial exercise in northern Europe in which II MEF exercises the capability to deploy and train large numbers of Marines and sailors in support of European NATO Allies and partners. The next iteration of Exercise COLD RESPONSE is scheduled to occur in early 2024.