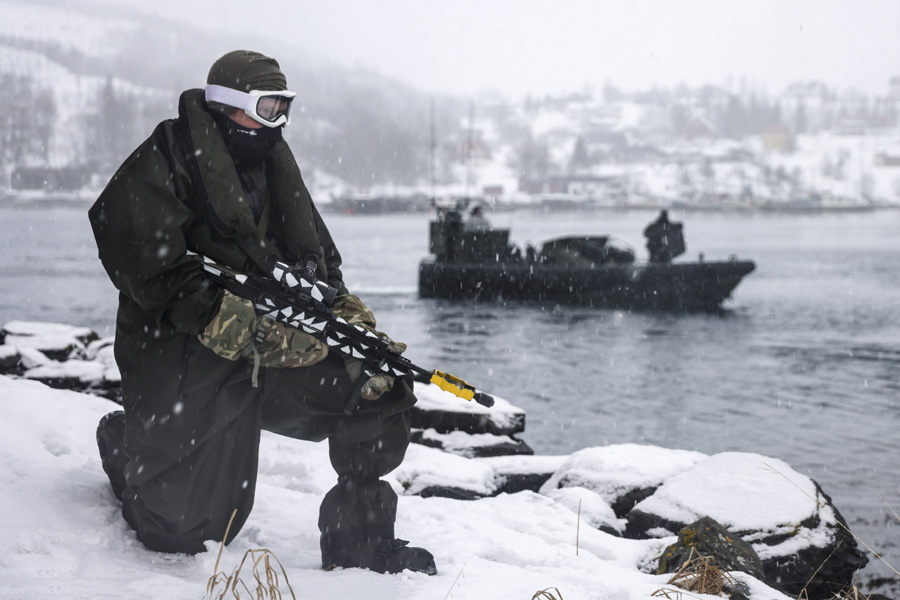 News Release, Whitehall, 08 April 2022: [Embargoed until 2200 hours 09 April] More than 3,000 sailors and Royal Marines were deployed deep inside the Arctic Circle – ashore, at sea and in the skies of Norway – to demonstrate the UK’s commitment to safeguarding Europe’s ‘northern flank’ against any aggressor.

They joined more than 27,000 personnel, warships, armour, and air power from more than two dozen NATO allies and partners for COLD RESPONSE 2022, the largest military exercise hosted in Norway since the Cold War. Britain’s biggest warship, HMS Prince of Wales, led the naval fleet, demonstrating her ability to act as NATO command ship – a role she will hold for the rest of 2022.

This was the first time one of the Royal Navy’s Queen Elizabeth-class aircraft carriers has been so far north, with more than 1,000 sailors gaining their first experience of operating in the Arctic region. Royal Navy sailors pushed the boundaries of what the 65,000-tonne flagship can do, as the crew developed new ways of working and coping with temperatures as low as -30 Celsius.

HMS Prince of Wales commanding officer, Captain Steve Higham, said: “As we continue to operate in and around the Arctic with our allies and partners, the sailors on HMS Prince of Wales are continuing to learn the skills, and build the experience that allow the Royal Navy to push the boundaries of UK carrier operations in the cold, harsh environment.”

The ship’s role in the exercise saw her work side-by-side with a breadth of British and Allied air power from F-35B Lightning stealth fighters to the Americans’ unique Osprey MV22 tiltrotor aircraft and Sea Stallion helicopters. The fortnight-long exercise – on top of several months of preparatory training both in the UK and Arctic – allowed the Royal Navy to demonstrate some of its unique capabilities, from launching commando raids from submarines to operating a fifth-generation aircraft carrier in sub-zero conditions for the first time.

The Royal Marines practised and honed new raiding tactics for stealth missions on the treacherous Norwegian coastline, supported by host nation forces, as well as conducting more regular manoeuvres and drills honed over more than half a century as the UK’s experts in Arctic warfare. Meanwhile divers from HMS Grimsby plunged into the icy fjords to neutralise mines and pave the way for task forces to sail through safely.

Royal Navy maritime Wildcat helicopters – normally found over the ocean, not land – joined the usual elements of Commando Helicopter Force to extend capabilities high over Norway. The Wildcat used its Seaspray radar, typically used for hunting suspicious ships, over land for the first time, picking out targets for their comrades, flying alongside the Royal Marines’ regular battlefield ‘eyes in the sky’, 847 Naval Air Squadron. They provided intelligence and firepower to comrades on the ground, assisted by the US Marine Corps’ Cobra gunships. Merlin Mk4 helicopters of 845 Naval Air Squadron ferried Royal Marines, equipment and supplies around, often in unforgiving conditions, and often side-by-side with American, German and Norwegian comrades.

Lieutenant Commander Tom Nason, 845 NAS Detachment commander said: “Exercise COLD RESPONSE 22 has been an outstanding demonstration of not only our integration with NATO partners, but also the seamless ability of Royal Navy, Royal Marines and Royal Fleet Auxiliary units to work together.”

As the exercise reached its climax, Defence Secretary Ben Wallace visited personnel [29th March] on the ground and HMS Prince of Wales to thank them for their efforts. He also reaffirmed the UK’s long-term commitment to security in the region and regular deployments of Royal Navy and Royal Marine assets to the High North.

Defence Secretary, Ben Wallace MP said: “I congratulate all those personnel from across the services who have achieved so much in the Arctic over recent weeks. Having visited the exercise myself I can testify to the challenging conditions and their utmost professionalism and good humour in maintaining operations throughout.

Editor’s Comment: The LIVEX (amphibious and land operations, supported by maritime and air capabilities) phase of the Norwegian Invitational Exercise COLD RESPONSE 2022 concluded on Thursday 31st March with the redeployment of the multinational foreign contingents commencing from 1st April. Be aware that some of the above images of Royal Marines provided by UK MoD to accompany this news release were taken on the preceding UK WINTER DEPLOYMENT training exercise rather than on the main CR22 exercise phases; as yet we have not seen any official photos of British Commandos landing or ashore during the main LIVEX phase which ran between 23rd and 31st March. For further coverage of CR22 click on the tag COLD RESPONSE 2022.