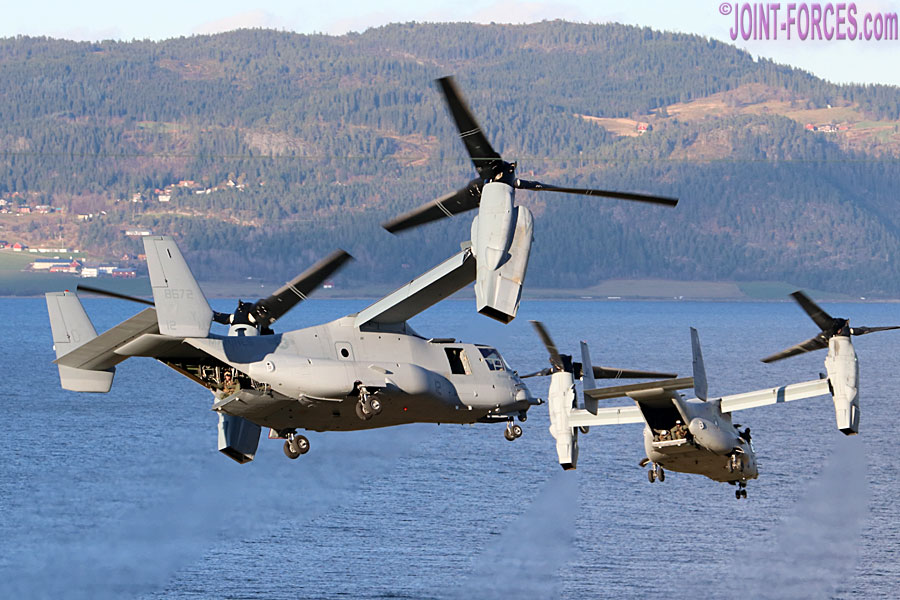 An MV-22B Osprey with four Marines assigned to 2d Marine Aircraft Wing on board has crashed taking part in COLD RESPONSE 2022 in Norway.

Four Marines assigned to 2d Marine Aircraft Wing, II Marine Expeditionary Force are currently listed in Duty Status Whereabouts Unknown following an aviation incident involving an MV-22B Osprey during a training mission in support of Exercise COLD RESPONSE 2022 near Bodø, Norway on the evening of March 19, 2022. As a matter of policy, identities of service members are not released until 24-hours after all next-of-kin notifications have been completed.

Norwegian civil authorities took the lead in search and rescue efforts, and we are grateful for their professional commitment to our enduring relationship. We are immensely grateful for the support of all first responders, the Norwegian Armed Forces, and Allies and partners that contributed various assets and people in the ongoing efforts.

Though the nature of military service is inherently dangerous, the safety of our Marines, Sailors, Allies and partners is our top priority. Our hearts go out to the families affected by these events. The incident is currently under investigation by both Norwegian and US organisations.

The American V-22B Osprey aircraft belongs to the US Marine Corps and was taking part in the Norwegian military exercise COLD RESPONSE. The aircraft had a crew of four and was out on a training mission in Nordland County on Friday 18 March 2022. It was on its way north to Bodø, where it was scheduled to land just before 18:00 on Friday. The plane crashed in Gråtådalen in Beiarn, south of Bodø. A search and rescue mission was launched immediately. At 01.30 Saturday night, the police arrived at the scene.

The police in Nordland County confirmed Saturday morning that the crew of four have died. The four Americans were Marines assigned to 2nd Marine Aircraft Wing, II Marine Expeditionary Force. Apart from the crew, there were no other people on board.

Military helicopter to assist in operation: The police have launched an investigation and notified the Accident Investigation Board Norway (AIBN). The weather in the area was very poor, and work at the scene was paused on Saturday. The weather is expected to improve on Sunday.

The Norwegian Armed Forces support the AIBN with one Bell 412 helicopter. The helicopter will be ready from Sunday morning and will take part in the further operation, headed by the AIBN and the police. The helicopter assists by request of the police in Nordland.

Chief of Defence: My thoughts go to family, friends and colleagues: “It has now sadly been confirmed that the crew on board the American aircraft died in the accident. My thoughts go to the crew’s family, friends and colleagues. I would like to thank everyone who have been involved in the search and rescue operation. We have no one to lose”, says Norwegian Chief of Defence, General Eirik Kristoffersen.

COLD RESPONSE to continue: Exercise COLD RESPONSE will carry on, with the measures we have to take due to the weather. The Norwegian Armed Forces support the Americans in managing the situation going forward. The US Marine Corps will notify the relatives and the Armed Forces will support when needed.