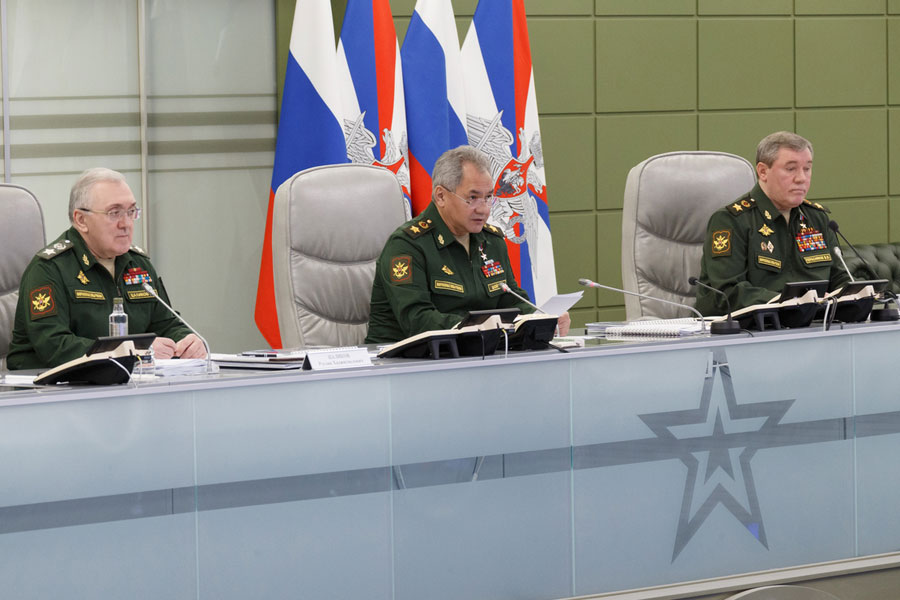 Russian Federation Minister of Defence Sergei Shoigu held a conference call with the leadership of the Armed Forces on Tuesday 1st February.

Opening the meeting, the Defence Minister recalled that in accordance with the decision of the Presidents of Russia and Belarus, the reaction forces of the Union State are being checked. From the Russian Armed Forces, the military administration bodies and units of the Eastern Military District are involved.

The first stage of inspection is currently underway. The troops were transferred to a distance of up to 10 thousand kilometres, including aviation units and military units of the air defence were relocated. The protection and defence of state and military facilities, the state border in the airspace has been organised within the framework of the unified regional air defence system of Belarus and Russia.

As part of the second stage of the inspection (in the period from February 10 to 20), a joint exercise UNION COURAGE–2022 will be held at five Belarusian training grounds. During the exercise, tasks will be worked out to ensure the military security of the Union State and counter terrorism.

“I would like to emphasise that the number of participants in the manoeuvres and the main weapons systems does not exceed the parameters established by the Vienna Document of 2011, which does not oblige us to notify foreign partners about the events being held,” the head of the Russian military department added. Nevertheless, according to General of the Army Sergei Shoigu, the Russian Defence Ministry, within the framework of voluntary transparency, informed the military attaches of foreign states about the inspection and joint exercises.

“In addition, in accordance with the training plan of the Armed Forces of the Russian Federation for 2022, a series of naval exercises are being held in January–February in all areas of responsibility of fleets. The actions of the Navy and the Aerospace Forces are being worked out to protect national interests in the oceans and to repel military threats from sea and ocean directions, more than 140 warships and support vessels, more than 60 aircraft are involved in the exercises,” the Defence Minister said.

Turning to the thematic part of the meeting, the head of the military department proposed to discuss the supply of the Bars-M mapping and remote sensing satellites to the troops. The Progress rocket and space centre is engaged in the modernisation and manufacture of Bars-M products in the interests of the Armed Forces.

“Today we will consider the problems with the deadlines for the delivery of spacecraft, as well as measures to remedy the situation,” said General of the Army Sergei Shoigu.

The second issue on the agenda of the conference call was devoted to the strategy of ensuring the uniformity of measurements in the Russian Federation until 2025.

“I want to emphasise that the development of the system of ensuring the uniformity of measurements in the Armed Forces directly affects the introduction of breakthrough technologies, the re-equipment of troops with the latest high-precision and other types of weapons. During the implementation of the strategy, the Ministry of Defence is regularly updating the fleet of military measuring equipment — more than 600 units of the latest models have already been delivered to the troops,” the Defence Minister said.

In addition, according to the head of the military department, an automated system for monitoring the condition of measuring instruments is being created. The regulatory legal framework in the field of ensuring the uniformity of measurements in the Armed Forces, other troops and military formations, as well as within the framework of CIS cooperation, is being actively improved.

“The measures taken can significantly improve the efficiency of the existing system. Today we will see how the action plan for the implementation of the strategy is being implemented,” Sergei Shoigu added.

Concluding the introductory part, the head of the military department recalled that the 24th Winter Olympics will be held in Beijing from February 4 to 20.

“The Russian team consists of almost a third of CSKA athletes. Army men have won prizes at world championships more than once. I am sure that this time they will adequately represent our country at the Beijing Games. I sincerely wish our athletes good luck and high results,” Sergei Shoigu said.