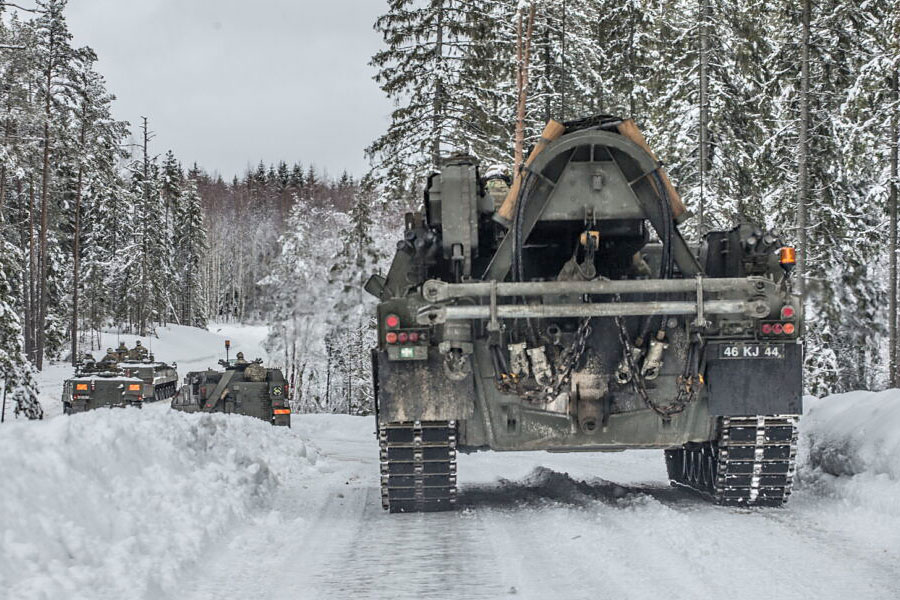 The NATO Battlegroup in Estonia, enhanced by a British Paratrooper contingent is taking part in the annual WINTER CAMP exercise.

Press Release, Tallinn, 27 January 2022: Close to 1400 soldiers will take part in the annual WINTER CAMP exercise on the Central Training Area near Tapa, testing their infantry and armour capabilities against the harsh winter conditions in Estonia.

Demonstrating winter interoperability under the command of the 1st Infantry Brigade, British, French and Estonian soldiers will work alongside one another across a range of armour, infantry, planning, engineering and artillery scenarios. Members of the UK-led Battlegroup will this year also be joined by soldiers from the British Army’s Parachute and Yorkshire Regiments, who will learn to train alongside armour in a winter environment.

“Since our arrival in September, we have placed great emphasis on increasing the Battlegroup’s capability and developing integration and interoperability with our allies,” said Lt Col Simon Worth, Commanding Officer of the eFP Estonia Battlegroup. “The Battlegroup has completed a series of exercises to prepare us for operating in the cold weather environment, which allows us to deploy on WINTER CAMP alongside the Estonian 1st Infantry Brigade and demonstrate the significant progress we have made.”

During the exercise NATO soldiers will be conducting live firing, anti-tank exercises, infantry patrols and engineering tasks, before culminating in a ‘force on force’ attack and defend training serial, with Estonian colleagues from the Scouts Battalion and the Estonian Defence League posing as the adversary.

This year, exercise WINTER CAMP will also include co-ordination between ground and air forces each day. F-16 fighter jets from the Belgian Air Force, currently stationed at Ämari Air Base in Estonia as part of the NATO Air Policing mission, will provide the air support, enhancing the training for Joint Terminal Attack Controllers, whose role is to direct actions of the aircraft and call in airstrikes.

“Fighting force on force with soldiers from Scouts Battalion and Defence League while at the same time being tested by Estonian winter and difficult terrain will provide a unique learning opportunity for the battlegroup,” said commander of 1st Infantry Brigade colonel Andrus Merilo. “WINTER CAMP will definitely develop United Kingdom, French and Estonian soldiers´ and their commanders’ skills. They will practice how to maintain combat capabilities of personnel and fighting vehicles and learn how to conduct offensive and defensive actions in winter conditions in the most effective way.”

“After several joint exercises, WINTER CAMP is the culmination of the French Combat Team’s participation to the eFP mission in Estonia,” said Lt Col Nicolas, Deputy Commanding Officer of the eFP Estonia Battlegroup. “It is a real opportunity for our soldiers to perfect their tactical skills in a demanding winter environment, as well as to strengthen their interoperability work with our NATO allies.”

As the largest winter exercise for the Battlegroup, it will begin on 29th January and is scheduled to run until the 6th of February.

NATO’s enhanced Forward Presence Battlegroup Estonia is currently led by the Royal Tank Regiment from the United Kingdom, with France and Denmark providing forces on a rotational basis. Iceland also contributes to the eFP. The eFP Battlegroups in Latvia, Lithuania and Poland are led by Canada, Germany and the US respectively and all NATO Battlegroups have been integrated into their host nations’ brigades to ensure maximum cohesion between Allied forces.