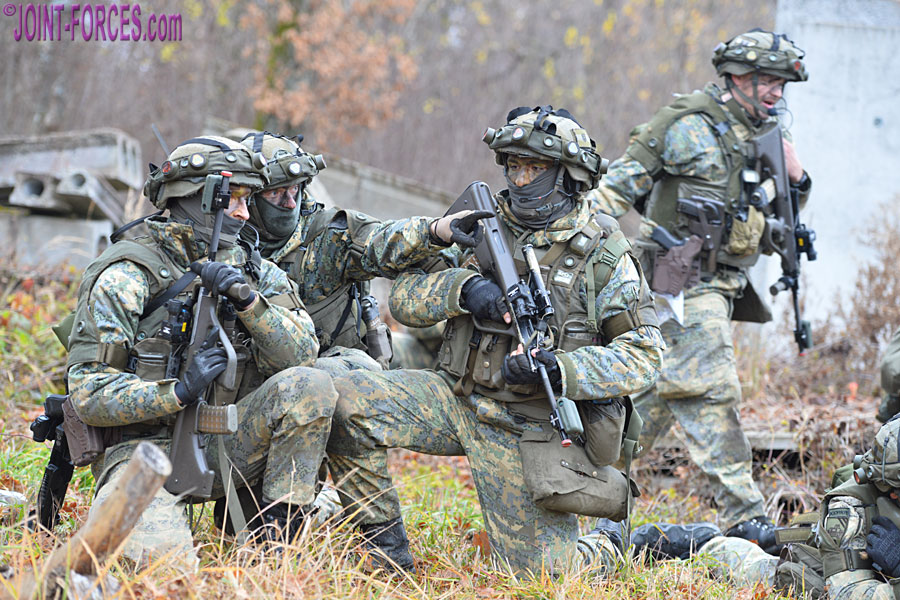 Between 15th and 26th November 2021 Jägerbataillon 25 (Light Infantry Battalion 25) of 7. Jägerbrigade (7th Light Infantry Brigade) of the Austrian Army successfully passed its NATO Evaluation Level 2 (NEL2) certification. The evaluation was conducted as part of a brigade level exercise held at the Allentsteig Training Area in Lower Austria. With the successful completion of the NEL2, Jägerbataillon 25 proved its capabilities in the fields of interoperability and mission accomplishment. It is now combat ready to deploy on NATO-led Crisis Response Operations.

The exercise involved some 1700 troops from 7. Jägerbrigade and many other formations of the Austrian Army. Additionally, 155 paratroopers of the Zweibrücken based German Fallschirmjäger Regiment 26, an airborne infantry regiment, participated on the exercise; these Fallschirmjäger mostly originated from the regiment’s 4th Company. The evaluation was conducted by 40 specially NATO trained evaluators of the alliance’s Operational Capabilities Concept Evaluation and Feedback Programme (OCC E&F), originating from both NATO and Partnership for Peace (PfP) nations such as Austria, Germany, Serbia and Sweden.

Under the scenario of the exercise a multinational light infantry battalion, based on Jägerbataillon 25, deployed as part of the fictional Western Alliance Force (WAFOR) to a crisis region. In this region a dispute between Redland and Yellowland over three provinces, currently belonging to the latter, threatened to destabilise the entire region. Under an UN resolution WAFOR now was tasked to: maintain an arms embargo against Redland; enforce peace in Yellowland; prevent a further destabilisation of the region and escalation of the situation; establish freedom of movement for WAFOR troops, the civilian population and civilian organisations; establish an Air Safety Zone over Yellowland; support the Yellowland police force and provide training support to it; provide assistance to refugees and internally displaced persons; disarm or neutralise irregular forces linked to Redland; protect the civilian population of Yellowland and support the country to maintain its integrity; and establish and support the UN Mission in Yellowland and a UN Civilian Police Force (UNCIVPOL) in Yellowland.

As part of this mission during the exercise, under the watchful eyes of the NATO evaluators, the multinational troops of Jägerbataillon 25 had to: conduct a battalion-size offensive operation against a village held by irregular forces; deal with a demonstration that, after negotiations failed, turned into a full scale riot; deal with illegal irregular forces roadblocks in order to establish freedom of movement conduct counter-IED operations; escort convoys through its Area of Responsibility; deal with an road traffic accident that caused a large number of casualties among the civilian population and WAFOR troops; and conduct a Cordon and Search Operation in order to strike a blow against illegal arms trafficking. On the side of all these incidents the soldier’s individual skills were also tested, for example in the field of NBC protection.

Austria is not a member of NATO. Therefore, according to information provided by NATO, the cooperation between Austria and the Alliance is conducted through the Partnership for Peace (PfP) framework*, which Austria joined in 1995. Since then NATO and Austria actively cooperate in peace-support operations, and have developed practical cooperation in a range of other areas. Austria worked alongside NATO Allies in security and peacekeeping operations in Bosnia and Herzegovina and Afghanistan, and currently has personnel deployed in Kosovo.

Within 7. Jägerbrigade and the Austrian Armed Forces, Jägerbataillon 25 is the only unit trained to conduct airborne and air assault operations and most of the unit’s troops are parachute jump qualified. The battalion is entirely composed of Kaderpräsenzsoldaten, professionals serving for at least three years, well trained and kept at high readiness to conduct operations at short notice within Austria, as part of so called Assistenzeinsätze or Assistance Missions in support of the national authorities, or to deploy abroad as part of an international mission to solve a crisis.