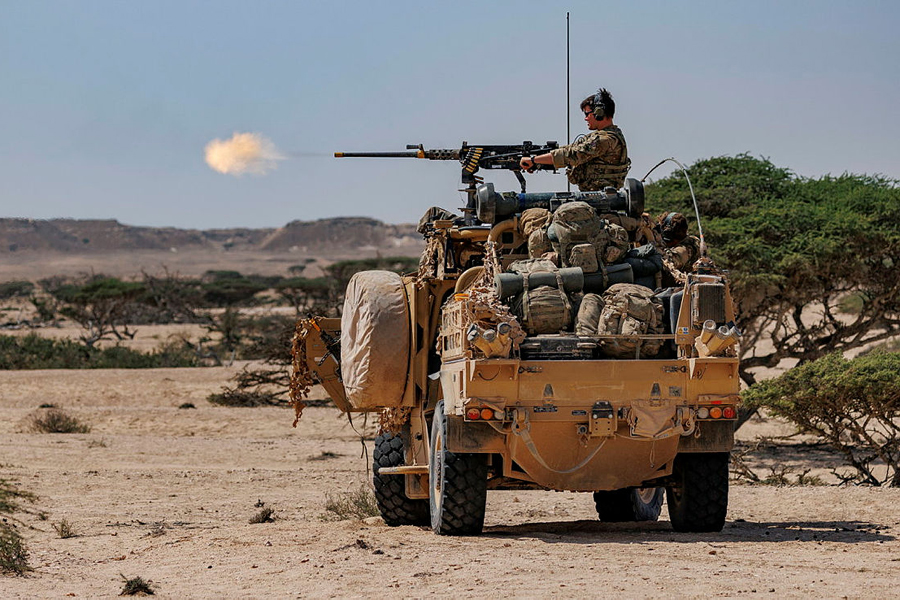 Defence Secretary Ben Wallace has visited Oman, to demonstrate the UK’s commitment to the country and the wider Gulf region.

HMS Queen Elizabeth – the Royal Navy’s flagship aircraft carrier – is docked at Duqm port in Oman, as the UK Armed Forces carried out joint land, sea and air exercises with the Omani Forces. The visit represents the UK’s integrated approach to defence and foreign policy and the UK’s enduring commitment to working with Oman and Gulf partners on promoting regional security and stability.

Defence Secretary Ben Wallace said: “HMS Queen Elizabeth is here to demonstrate our commitment to the Omanis as invaluable partners and to show our support to the wider Gulf region.

“This visit presents an opportunity to see UK forces working hand in hand with our Omani partners across land, air and sea exercises, promoting stability and security in the region and confronting our shared threats.”

The Defence Secretary hosted the Omani Deputy Prime Minister for Defence Affairs, His Highness Shihab bin Tariq, onboard HMS Queen Elizabeth. They observed the impressive capabilities of the aircraft carrier and met UK personnel onboard the ship. HMS Queen Elizabeth leads the UK Carrier Strike Group which is on its maiden operational deployment to the Indo-Pacific and Middle East, embodying the Government’s Global Britain vision.

The Defence Secretary and Deputy Prime Minister for Defence Affairs also had the opportunity to see Exercise KHANJAR OMAN at the Ras Madrakah training area. This is a joint battlegroup exercise involving UK and Omani troops, with ground forces supported by the Carrier Strike Group at sea and F-35 jets from the air. Exercise KHANJAR OMAN represents a key part of the Army’s Future Soldier concept, which will see British soldiers more integrated with our partners in regional hubs around the world.

The Defence Secretary observed urban training exercises which showcased the impressive range of skills and equipment at the disposal of our Armed Forces. During the visit, RAF Typhoon jets arrived in Oman in advance of Exercise MAGIC CARPET – a joint air exercise between the UK, Oman and Qatar Air Forces which will take place in the coming weeks. The annual event gives Typhoon pilots the opportunity to conduct a range of training sorties.

Editor’s Comment: On 28th October, having heard through the grapevine that media representatives were being allowed to cover Ex. KHAJAR OMAN, we formally registered our interest in attending the exercise after ascertaining from the MoD Press Office who we should contact; that request, like several others over the last couple of years, was read by a press officer but ignored. We appreciate that JOINT-FORCES does not have the readership of the mainstream media, but while few of the general public probably pay all that much attention to HM Forces coverage in the news, we think it is probably a safe bet that the vast majority of our readers would be very interested any coverage we were able to provide.

From those officially released ‘Current News Only’ images we have seen so far it looks like the British Army units on KHANJR OMAN have been having an interesting time and it a great pity that once again the UK MoD spin machine appears to be focusing primarily on covering a ministerial visit rather than facilitating independent reporting on the soldiers, units and equipment deployed on the ground in Oman in what are most likely challenging conditions.