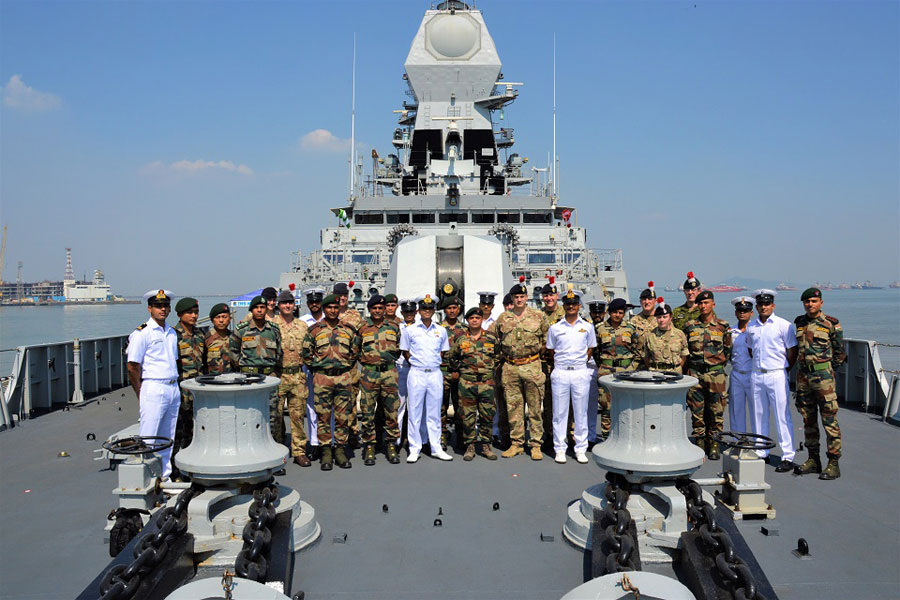 The UK’s Armed Forces are participating in the tri-service Exercise KONKAN SHAKTI with their counterparts from the Indian Armed Forces.

News Release, New Delhi, 26 October 2021: UK’s Armed Forces are participating in Exercise KONKAN SHAKTI with their counterparts from the Indian Armed Forces from 21 to 27 October 2021 in India.

Personnel from all three services from both countries are exercising in a tri-service exercise, the most ambitious conducted by the two countries to date. It follows on from the May 2021 announcement by Prime Ministers Modi and Johnson of the India-UK 2030 Roadmap. The United Kingdom’s Carrier Strike Group (CSG), led by HMS Queen Elizabeth, is also participating in the exercise.

The exercise is another step in deepening the defence and security ties and boost strategic cooperation in the Indo-Pacific region. The exercise provides an opportunity for the armed forces of two outward looking, confident democracies to work in synergy and uphold our shared commitment to peace and security.

First Sea Lord Admiral and Chief of Naval Staff Admiral Tony Radakin said: “The CSG’s engagement with India showcases the deepening comprehensive strategic partnership. Both the Indian and the Royal navy are blue-water, multi-carrier navies, which places us in a very exclusive club. Our growing interactions are a testimony to the shared commitment to rules-based international system, a belief in the values of open trade, and in the importance of the freedom of the high seas – a right conveyed on all nations.”

Defence Adviser at the British High Commission, Gavin Thompson, said: “A strengthened partnership with India is a key pillar of the UK’s tilt to the Indo-Pacific. Prime Ministers Modi and Johnson agreed to work in lockstep for our shared security and prosperity. KONKAN SHAKTI will not only boost the cooperation of our armed forces but also strengthen the living bridge connecting the people of our two great nations.

Further information: The KONKAN SHAKTI exercise began on 21 October and will culminate on 27 October. The UK is only the third country with which India is conducting a tri-service exercise. The exercise follows the CSG’s two-day engagement with the Indian Navy in July, followed by Exercise KONKAN along the UK’s coast in August and Exercise AJEYA WARRIOR between the two armies earlier this month.

The CSG is operating in the region as part of a six-month deployment to the Indo-Pacific. The maiden CSG deployment will travel 26,000 miles, visiting more than 40 countries. At 65,000 tonnes, HMS Queen Elizabeth is the largest surface vessel ever constructed in the UK. She leads six Royal Navy ships, a Royal Navy submarine, a US Navy destroyer and a frigate from the Netherlands in the largest concentration of maritime and air power to leave the UK in a generation. It is equipped with the fifth generation F-35B lightening multi-role aircrafts. They are being jointly crewed by the Royal Air Force, Royal Navy and the US Marine Corps.