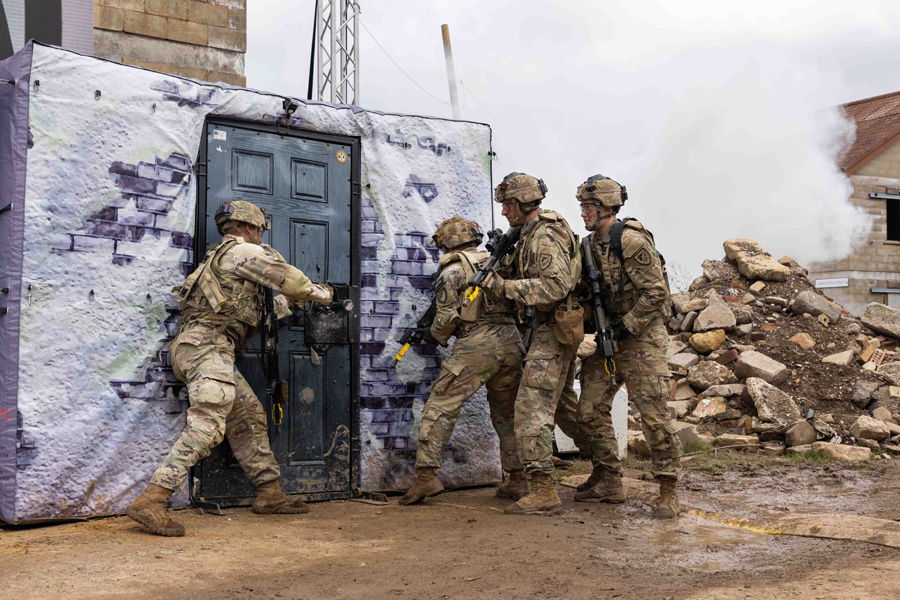 Much as we should have liked to have provided independent press coverage of AWE 21 and DYNAMIC WARRIOR, regrettably UK MoD did not invite us and indeed ignored our communications requesting details of when the media would be granted access¥.

As far as we can determine 16 or 17 Industry Partners, including many whose new technology we regularly cover in our Defence Industry News section, contributed to the month-long experiment which sought to harness technology to prepare for complex future warfare. The bulk of the military personnel who participated on the two-week Ex DYNAMIC WARRIOR phase appear to have been drawn from The Queen’s Royal Hussars, The Light Dragoons, The Rifles, The Duke of Lancaster’s Regiment and the 1st Battalion, of the US Army’s 29th Infantry Regiment. New technology showcased included Augmented Reality, Virtual Reality and Simulated Training aimed at enhancing the soldier’s collective training experience in a cost effective and realistic way.

In a Press Release coinciding with a visit to AWE 21 on 7th October by Minister for the Armed Forces, James Heappey MP, accompanied by senior officers, the Deputy Chief of the General Staff, Lt Gen Sir Christopher Tickell KBE, is quoted as saying: “AWE 21 seeks to harness technology to prepare for complex future warfare. It has been designed to experiment with and showcase next generation Collective Training Systems (CTS) to inform future Army and wider Defence force development decisions.”

From the small number of MoD images subsequently released and the 40-page Product Book published for attendees, it looks like this could have been a great opportunity to inform our readership on the latest iteration of AWE (which I last covered in 2017 for the late C&S Magazine). Some members of the media were indeed invited to visit AWE 21 a couple of days ago, hence the ‘Joe 90 Glasses’ story run today by one of the Nationals, but whether or not any in-depth independent coverage surfaces of the sterling work being done by the participating Industry Partners, in conjunction with DE&S and Dstl, remains to be seen.

¥ Editor’s Comment: We know from the December 2020 Kelly Report (see UK MoD Media Blacklisting Allegations ) that the MoD does not officially operate a Media Blacklist in breach of the Civil Service Code, so JOINT-FORCES cannot be on such a list. However one must assume they are running a Media Whitelist instead, which presumably we are not on either. Why else would MoD personnel ignore our polite emails requesting AWE 21 media access dates after the duty officers on the MoD Main Building Press Desk phone line, unable to give answers themselves, provided press officials’ contact details and told us “please send ### an email with your questions”? I know that working from home, as many civil servants have been doing for the last 18 months, is not always easy ~ like our other journalist contributors, I have mostly worked from home myself for a great many years ~ but reading and binning an email rather than answering it or suggesting somebody else to ask the question of, strikes me as being pretty poor behaviour… unless, of course, we are being Blacklisted.